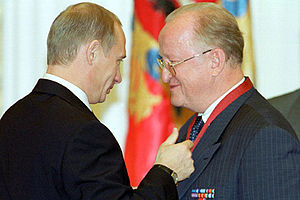 Geraschenko receives Order of Merit for the Fatherland from Vladimir Putin, 2000

Viktor Vladimirovich Gerashchenko (Russian: Ви́ктор Влади́мирович Гера́щенко), nicknamed Gerakl (the Russian version of Heracles), was the Chairman of the Soviet and then Russian Central Bank during much of the Perestroika and post-Perestroika periods.

Viktor Gerashchenko was born in Leningrad on 21 December 1937. His father was a leading Soviet banker who ran the Financial Department of the Foreign Office in the 1940s before ending his career as Deputy Chairman of the Central Bank. Due to his father's connections, Viktor made a brilliant career in the Soviet banking system. At the age of 28 he became Director of the first Soviet bank abroad, Moscow Narodny Bank, based in London.

His activities as Central Bank chair were controversial: for example, he was accused of illegally supplying money to the anti-reform forces in the Supreme Soviet during the 1993 Russian Constitutional Crisis. Gerashchenko has also been accused of being largely responsible for the Russian "Black Tuesday" of October 1994, when the Russian ruble crashed 24 percent in one day. In fact, former Harvard Economist Jeffrey Sachs in 1995 called Gerashchenko "the worst central banker in the world." [1]

Gerashchenko laid down his offices in 1994 but returned to the office following the 1998 Russian financial crisis. Under his leadership, the economy of Russia rapidly recovered after the excruciating default. Gerashchenko made frequent TV appearances and became quite popular for his sardonic, dry sense of humor.

In March 2002 Gerashchenko resigned again, citing his advanced age, and accepted the post of Chairman of the Board in the notorious oil company Yukos. He then joined the Rodina party as a co-chairman and made it to the State Duma as their representative [2].

He considered becoming an opposition candidate in the 2008 Russian Presidential election.[3]