After leaving the space program in 1982 he taught at the Air Force Engineering Academy in Moscow.

His multiple Soviet and Russian Federation awards include:

His foreign awards include: 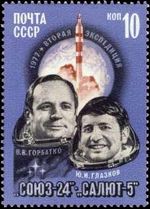