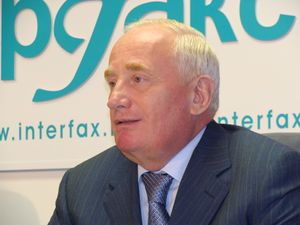 Viktor Kress on an Interfax press-conference

Viktor Melkiorovich Kress (Russian: Виктор Мельхиорович Кресс) (born 16 November 1948 in Vlasovo-Dvorino, Kostroma Oblast) is a Russian politician. He is best known for serving five terms as governor of Tomsk Oblast, Russia from 1991 to 2012.

Kress was born into a peasant family with five brothers and a sister. Both his parents were ethnic Germans. During his education he also worked on the farm at the village of Yashkino in Kemerovo Oblast.

Kress graduated from Novosibirsk Agricultural Institute in 1971 as an agricultural economist and worked as an agronomist in Siberia eventually becoming head of the Rodina Sovkhoz near Tomsk. In 1987, he rose to the position of First Secretary of the CPSU committee of Pervomayskoye rayon, Tomsk Oblast. In 1990, Kress was elected and served as speaker of the Tomsk Oblast Soviet. In 1991, after the Dissolution of the Soviet Union, President Boris Yeltsin appointed him as governor of Tomsk Oblast. Kris's won re-election by popular vote three times, in 1995, 1999 and 2003. In 2007, President Vladimir Putin, who had ended the direct election of governors, nominated him for a fifth term, which he won by a vote of the Regional Duma.[1] On March 17, 2012, Kress resigned as Governor.

On May 17, 2012, Kress' successor, Governor Sergei Zhvachkin, appointed him to the Federation Council as the representative of Tomsk Oblast. He serves as the Deputy Chairman of the Committee on Science, Education, Culture and Information Policy.

Kress became a member of United Russia in 2004.

Kress is married to Lyudmila Kress and has two children, His daughter Elena is a cardiologist and his son Vyacheslav is judge at the Seventh appellant arbriage court. He has four grandchildren.