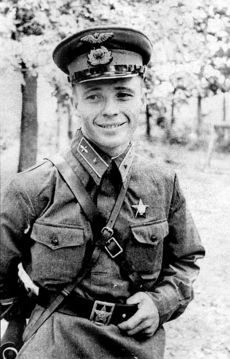 Viktor Vasilevich Talalikhin (Виктор Васильевич Талалихин) (18 September 1918 – 27 October 1941) was a Soviet lieutenant and aviator during the Winter War and World War II and a Hero of the Soviet Union, among the first to perform aerial ramming at night.

Talalikhin was born in 1918. He was commissioned as a second lieutenant in 1938 and became a fighter pilot. He participated in the Winter War, the Soviet-Finnish war of November 1939-March 1940, claiming three air victories in 47 sorties.[1]

In 1941, during the first few weeks of fighting on the Eastern Front during World War II, he was first a wing commander, then a deputy squadron commander, flying with 177th IAP.

On 6 August 1941, flying a Soviet National Air Defense Forces Polikarpov I-16 fighter over Moscow, Talalikhin rammed a German Heinkel He.111 bomber after running out of ammunition, destroying both aircraft. Wounded by machine-gun fire from the German bomber, he parachuted to safety, landing in a small lake. He was the first pilot in history to ram an enemy aircraft at night, and was feted in Moscow as the first major Soviet air hero of World War II.[2]

Subsequently Talalikhin shot down five more enemy planes. He was killed in action flying a MiG-1 during an aerial dogfight with Bf 109s on 27 October 1941.[3] and is buried in Novodevichy Cemetery in Moscow.

Talalikhin was declared a Hero of the Soviet Union in 1941.