He is regarded as one of the pioneers of Russian rock and has many devoted fans across the countries of the former Soviet Union even today. Few musicians in the history of Russian music have been more popular or have had more impact on their genre than Viktor Tsoi and his rock band Kino. Aside from that, Tsoi contributed a plethora of musical and artistic works, including ten albums. Viktor Tsoi died in a car accident on August 15, 1990, aged 28.[1][2][3]

At the age of 17, Tsoi began writing songs. In the 1970s and the 1980s, rock was an underground movement limited mostly to Leningrad; Moscow pop stars ruled the charts and received the most exposure from the media. However, rock music was not popular with the government. Thus rock bands received little or no funding and were not given any exposure by the media. By this time Tsoi had begun to perform the songs he wrote at parties.

Tsoi went to underground concerts of Leningrad rock musicians. After a Boris Grebenshchikov solo concert he returned with Grebenshchikov by commuter train from Petergof to Leningrad and played two of his songs to him.[6] Grebenshchikov, who had already been a relatively established musician in the Leningrad underground scene, was very impressed by Tsoi's talent and helped him start up his own band. This was the beginning of Tsoi's rock music career.

Leningrad's Rock Club was one of the few public places where rock bands were allowed to perform. It was there in 1982, at their first annual Rock Concert that Viktor Tsoi made his stage debut. He was playing as a solo artist supported by two members of Aquarium. Tsoi's innovative lyrics and music impressed the crowd.

Before making it big, Tsoi said that the problem with music was that no one wanted to take chances. He wanted to experiment with lyrics and music in order to create something fresh that no one had ever heard before. Tsoi succeeded in his goal. Shortly after the concert he recruited other musicians and they formed Kino, which in Russian means both "cinema" and "film". They recorded a demo tape at Tsoi's apartment. This tape was quickly passed around Leningrad, and then all over the country by rock enthusiasts. Kino began to gain popularity.

In 1982, Kino released their first Samizdat album 45. This album first showed Tsoi's willingness to approach political topics in his music, something few other artists were willing to do. In his song "Commuter Train" (Russian: Электричка) he discussed a man stuck in a train that was taking him where he didn't wish to go; this was clearly a metaphor for life in the Soviet Union, and the band was quickly banned from performing this song live. Regardless, the political message of the song made it popular among the youth of the anti-establishment movement that now began to look to Viktor Tsoi and Kino as their idols.

In 1982, Tsoi met Marianna Rodovanskaya, whom he married in 1985. She was a source of support and family for Tsoi, giving birth to their son Alexander (Sasha) on 5 August 1985. Marianna Tsoy became the owner of rights to her husband's songs after his death. She survived Viktor by 15 years before dying from cancer in 2005.[7]

Kino displayed more of their political views at the 2nd Leningrad Rock Club Concert. The band won the competition with Tsoi's anti-war song "I Declare My Home... [a nuclear-free zone]" (Russian: Я объявляю свой дом ... [безъядерной зоной]). The song's popularity was fueled by the ongoing Afghan War which was claiming the lives of thousands of young Soviet citizens. Several sources claim that Viktor Tsoi went to a psychiatric hospital to evade conscription, but it is considered a mere myth as doctor-patient confidentiality prevents any reliable source from revealing any relevant information.[8][9][10][11] 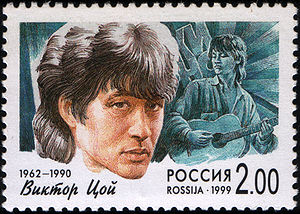 Kino was still not getting Soviet media attention when Mikhail Gorbachev was appointed General Secretary of CPSU in 1985. The social and economic reforms associated with the latter's name exposed social and economic problems of the Soviet Union allowing open discussion of them in the media. Restrictions on the media were loosened and rock bands became mentioned in the newspapers and shown on TV. In 1986 Tsoi used the open atmosphere and public sentiment to release a song titled "[We want] Changes!" (Russian: [Мы ждем] перемен!). The song called on the young generation to demand changes within the current system and spread Kino's name all over the nation.

1987 was a breakthrough year for Kino. The release of their 5th album Blood Type (Gruppa Krovi) triggered what was then called "Kinomania". The open political climate under glasnost allowed Tsoi to make Blood Type, his most political album, yet it also allowed him to record a sound of music that no one before him had been able to play. Most of the tracks on the album were directed at the youth of the Soviet Union, telling them to take control and make changes within the nation; some of the songs addressed the social problems crippling the nation. The sound and lyrics of the album made Tsoi a hero among Soviet youth and Kino the most popular rock band ever. In the diverse Soviet republics fans translated his originally Russian lyrics into their native languages as well. Over the next few years, Tsoi appeared in several successful movies and also traveled to the USA to promote his films at film festivals. Several more albums were released, their themes were once again mostly political, further fueling the band's popularity. Even though Tsoi was a huge star, he still lived a relatively ordinary life. He kept his old job in the boiler room of an apartment building, a fact that surprised many people. Tsoi said that he enjoyed the work and he also needed the money to support the band, as they still received no government support and their albums were copied and passed around the nation via samizdat free of charge. This made Tsoi even more popular among the people because it showed that he was down to earth and they could relate to him. He also went on tour in 1988–1989 to Italy, France and Denmark. Kino's finest hour came in 1990 with a concert at Moscow's Luzhniki Stadium. 62,000 fans filled the stands to celebrate the triumph of the USSR's most successful rock group.

In 1987, the band Kino, along with other Russian rock bands, appeared as themselves in Assa (Асса), a film by Sergei Solovyov.

In 1988, Viktor Tsoi starred in a feature film directed by Rashid Nugmanov and written by Aleksandr Baranov and Bakhyt Kilibayev. It was entitled The Needle (Russian: Игла, Igla) with Tsoi playing the movie's protagonist. The plot is centered around the character Moro, who returns to Almaty, Kazakhstan, to collect money owed to him. While waiting out an unexpected delay, he visits his former girlfriend Dina, and discovers she has become a morphine addict. He decides to help her kick the habit and fight the local drug mafia responsible for her condition. But Moro finds a deadly opponent in "the doctor," the mafia kingpin who is exploiting Dina.[12]

The film's soundtrack, including original music by Tsoi's band Kino, contributes to the overall feeling of the movie, in addition to the film's use of post-modern twists and surreal scenes.

The movie was officially released in February 1989 in the Soviet Union. 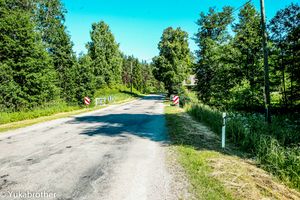 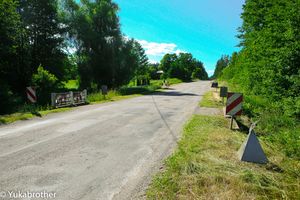 While in Latvia, on 14 August 1990, Tsoi finished recording the vocals for Kino's next album. He was supposed to travel back to Leningrad so that his band mates could record its musical score. Early in the morning of 15 August, Viktor Tsoi was driving on the Sloka – Talsi road from a fishing trip when his Moskvitch 2141 Aleko collided with an Ikarus 250 bus outside Tukums at high speed. Tsoi died almost instantly. His car was completely destroyed to the point that one of its tires was never found. The investigation concluded that Tsoi had fallen asleep while driving, possibly due to fatigue;[13] he had not consumed alcohol for at least 48 hours before his death. Tsoi had wanted to take his son Alexander (Sasha) with him on the trip, but Sasha did not go. Tsoi was buried in a closed casket.

On 17 August, Komsomolskaya Pravda, one of the main Soviet newspapers, had the following to say about Tsoi and his meaning to the youth of the nation:

Tsoi means more to the young people of our nation than any politician, celebrity or writer. This is because Tsoi never lied and never sold out. He was and remains himself. It's impossible not to believe him... Tsoi is the only rocker who has no difference between his image and his real life, he lived the way he sang... Tsoi is the last hero of rock.

The tape which contained the only recording of Tsoi's vocals for the next album was recovered and the surviving members of Kino recorded the music to the album, which was christened Black Album as a sign of mourning for the fallen singer. The album became the band's most popular creation. 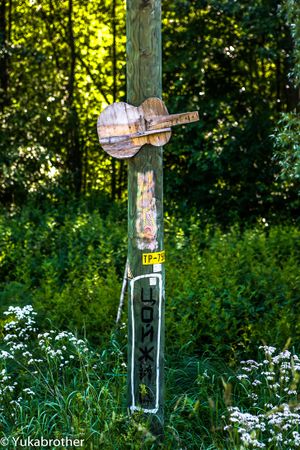 One of the most popular graffiti slogans in Russia and within ex-USSR nations says "Tsoi is alive and always will be in our hearts" ("Цой жив и всегда будет жить в наших сердцах!") or the common short version "Tsoi is alive" ("Цой жив"). 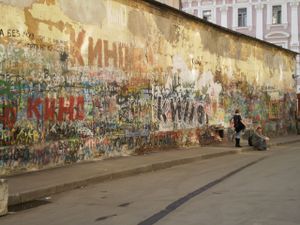 The Tsoi Wall in the Arbat District of Moscow.

Kino's impact on Soviet music and society was huge. The group introduced a sound and lyrics that no other Soviet artist before them was able or willing to produce. Kino opened the doors for modern Russian rock bands. It's displayed today in many places around Russia, from graffiti on the fences of St. Petersburg to an entire wall dedicated to Viktor Tsoi in a bylane of the famous Arbat street in Moscow, where fans still gather to remember their hero. In 2000 some of the nation's top rock bands came together and released their interpretations of Kino's best songs as a tribute to Viktor Tsoi on what would have been his 38th birthday.