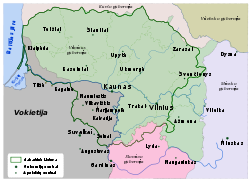 The Vilna Governorate (1795–1915; also known as Lithuania-Vilnius Governorate from 1801 until 1840; Russian: Виленская губерния, Vilenskaya guberniya, Lithuanian: Vilniaus gubernija, Polish: gubernia wileńska) or Government of Vilnius was a governorate (guberniya) of the Russian Empire created after the Third Partition of the Polish-Lithuanian Commonwealth in 1795. It was part of the Lithuanian General Governorate, which was called the Vilnius General Governorate after 1830, and was attached to the Northwestern Krai. The seat was in Vilnius (Vilna in Russian), where the Governors General resided.

During the Polish-Soviet War, the area was annexed by Poland. The Council of Ambassadors and the international community (with the exception of Lithuania) recognized Polish sovereignty over Vilnus region in 1923.[4] In 1923, the Wilno Voivodeship was created, which existed until 1939, when the Soviet Union occupied Lithuania and Poland and returned most of the Polish-annexed land to Lithuania.

In 1834, the Vilnius Governorate had about 789,000 inhabitants; by 1897, the population had grown to about 1,591,000 residents[5] (37 per square kilometer) The population was 56.1 percent Belarusian, 17.6 percent Lithuanian, 12.7 percent ethnic Jewish and 8.2 percent Polish.[6] Between 1944 and 1946, about 150,000 people, mostly but not all of Polish extraction, left the area for Poland (about 10 percent of this group may have been Lithuanians hoping to escape Soviet rule). Between 1955 and 1959, another 46,000 Poles left Lithuania (see the Ethnic history of the Vilnius region). Meanwhile, the Jewish population of the area, just as in the rest of Lithuania, was virtually exterminated by the Nazis during World War II. As of 2001, ethnic Lithuanians once again predominated within the city of Vilnius (59 percent), but the area of the former governorate as a whole remained about 62 percent Polish, with the percentage of Russians (8.6) and Belarusians (4.4) having dwindled to a tiny minority.