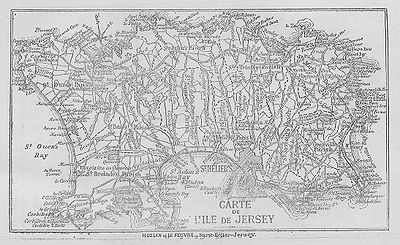 This map, published 1891, shows the location of vingtaines and cueillettes in Jersey

A vingtaine (literally "group of twenty" in French) is a political subdivision of Jersey. They are subdivisions of the various parishes of Jersey, and one, La Vingtaine de la Ville (The Vingtaine of the town), in Saint Helier is further divided into two cantons.

In each vingtaine, vingteniers and Constable's officers (in French: officiers du Connétable) are elected as part of Jersey's Honorary Police system. They do not have to live within the vingtaine or cueillette they represent, but they must live in the parish they represent (except in St. Helier, where ratepayers and mandataires are eligible).

Vingteniers are elected by a Parish Assembly of electors and ratepayers for a term of three years but are elected to a particular vingtaine (or cueillette) in that Parish. Vingteniers carry out general community policing in the parish, and fulfill administrative roles within their vingtaine in respect of tasks such as the Visite du Branchage.

Constable's Officers are elected to serve a vingtaine or cueillette at an Assembly of the electors of that Parish. They assist the Centeniers and vingteniers of the parish with community policing.

Roads Inspectors are elected to serve a vingtaine or cueillette at an Assembly of the electors of the Parish. They are responsible to for maintaining the highways and byways of the Vingtaine. Along with Honorary Police they are sworn in as officers by the Royal Court. Roads Inspectors report to and must enforce the decisions of the Roads Committee of the Parish.

By parish, the vingtaines are as follows-

The Minquiers are part of the parish of Grouville, but are uninhabited.

The Écréhous (including Les Dirouilles and Pierres de Lecq) are part of the parish of St. Martin, but are uninhabited.

Unusually, the subdivisions of this parish are not named vingtaines, they are instead named cueillettes.