Vinnytsia (Ukrainian: Ві́нниця, pronounced [ˈvʲinːɪt͡sʲɐ], Vinnytsya; Russian: Ви́нница Vinnitsa; Polish: Winnica; German: Winniza, and Romanian: Vinnița) is a city in west-central Ukraine, located on the banks of the Southern Bug. It is the administrative center of Vinnytsia Oblast and the largest city in the historic region of Podillia. Administratively, it is incorporated as a town of oblast significance. It also serves as an administrative center of Vinnytsia Raion, one of the 27 districts of Vinnytsia Oblast, though it is not a part of the district. Population: 371,698 (2013 est.)[2].

A historic town known since Middle Ages and a former Soviet Cold War-airbase, Vinnytsia is now an industrial center (particularly, dominated by the Roshen corporation), a growing international IT-outsource center and the headquarters of the Ukrainian Air Force. The city is also home to the RPC Fort, the largest Ukrainian firearms manufacturer.

Vinnytsia is considered the long-time political base for the current Ukrainian President Petro Poroshenko. He owns a local confectionery (as part of the Roshen Corporation) and was elected member of parliament from the local constituency for several convocations. However, contrary to some speculations, Poroshenko has never lived in the city.

The current estimated population is 370,100.

A long lasting warm summer with a sufficient quantity of moisture and a comparatively short winter is characteristic of Vinnytsia. The average temperature in January is −5.8 °C (21.6 °F) and 18.3 °C (64.9 °F) in July. The average annual precipitation is 638 mm (25 in).

Over the course of a year there are around 6–9 days when snowstorms occur, 37–60 days when mists occur during the cold period, and 3–5 days when thunderstorms with hail occur.

Vinnytsia has been an important trade and political center since the fourteenth century, when Fiodor Koriatowicz, the nephew of the Lithuanian Duke Algirdas, built a fortress (1363) against Tatar raiders on the banks of the Southern Bug. The original settlement was built and pupulated by Aleksander Hrehorovicz Jelec, hetman under Lithuanian Prince Švitrigaila. Aleksander Hrehorowicz Jelec. He built the fort, which he commanded as starosta afterwards. In the 15th century, Polish King Alexander Jagiellon granted Winnica Magdeburg city rights. In 1566, it became part of the Bracław Voivodeship. Between 1569 and 1793 the town was a part of Poland and in this period, for a short time between 1672 and 1699 was a part of the Ottoman Empire. During period of Polish rule, Winnica was a Polish royal city. On March 18, 1783, Antoni Protazy Potocki opened in Winnica the Trade Company Poland. After Second Partition of Poland in 1793 the Russian Empire annexed the city and the region. Russia moved to expunge the Roman Catholic religion – Catholic churches in the city (including what is now the Transfiguration Cathedral) were converted to Russian Orthodox churches. 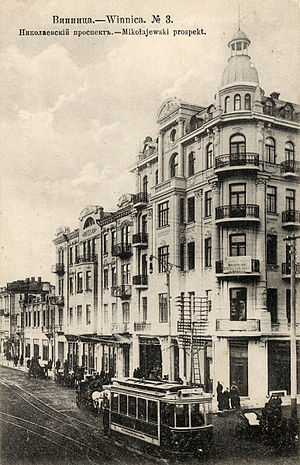 Vinnytsia on a 1910s postcard

According to the Russian census of 1897, Vinnytsia with a population of 30,563 was the third largest city of Podolia after Kamianets-Podilskyi and Uman.

In 1943, the invading Germans exhumed almost 10,000 people, mostly male Ukrainians, from mass graves in Vinnytsia. The majority of the executions happened during the Stalinist Great Purge between 1937–1938 in the Vinnytsia massacre.

Adolf Hitler sited his easternmost headquarters Führerhauptquartier Werwolf near the town and spent a number of weeks there in 1942 and early 1943.

Nazi atrocities were committed in and near Vinnytsia by Einsatzgruppe C. Estimates of the number of victims run as high as 28,000. This included the virtual extinction of the town's large Jewish population. One infamous photo, The Last Jew of Vinnytsia, shows a member of Einsatzgruppe D about to execute a Jew kneeling before a mass grave.[5] The text The Last Jew of Vinnytsia was written on the back of the photograph, which was found in a photo album belonging to a German soldier.

In 1959, the United States Government reported that the Soviet Union had built a school in Vinnytsia for training KGB infiltrators in how to live in the United States. A mock-up of an entire American small town was built, complete with American-style stores, movie theater, houses, restaurants, American vehicles, and a small college campus that served as the classrooms of the school.[6][7] 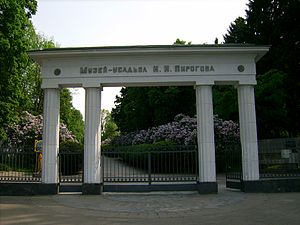 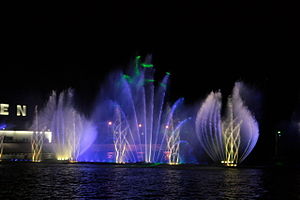 Fountain Roshen[9] is the only one in Ukraine and the largest floating fountain in Europe, built in the river Southern Buh in Vinnytsia City near Festivalny Isle (Campa Isle) 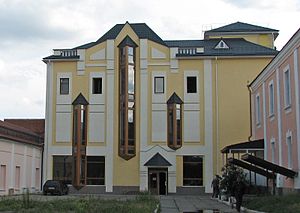 Havryshivka International Airport (IATA: VIN, ICAO: UKWW) is situated near Vinnytsia.[13][14] Since the end of World War II, Vinnytsia has been the home for major Soviet Air Forces base, including an airfield, a hospital, arsenals, and other military installations. The headquarters of the 43rd Rocket Army of the Strategic Rocket Forces was stationed in Vinnytsia from 1960 to the early 1990s.[15] The 2nd Independent Heavy Bomber Aviation Corps, which later became 24th Air Army, was also stationed in Vinnitsa from 1960 to 1992. The Ukrainian Air Force Command has been based in Vinnytsia since 1992. Currently from the airport there are regular flights to Israel, Montenegro and Moscow. 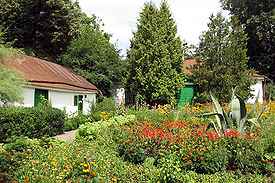 The house where Mykhailo Kotsiubynsky was born.

Vinnytsia is twinned with:[16]