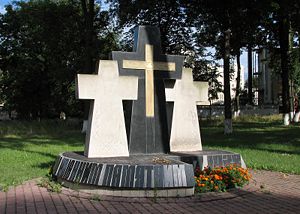 Modern memorial for the victims of the Soviet terror of 1937–1938 close to Gorky park, Vinnytsia. 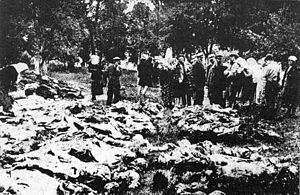 People of Vinnytsia looking for their relatives among exhumed bodies.

The Vinnytsia massacre was a mass execution of (mostly ethnic Ukrainian) people in the Ukrainian town of Vinnytsia by the Soviet secret police NKVD during Joseph Stalin's Great Purge in 1937–1938. Mass graves in Vinnytsia were discovered during the German occupation of Ukraine in 1943.[1] The investigation of the site first conducted by the international Katyn Commission coincided with the discovery of a similar mass murder site of Polish prisoners of war in Katyn. Because the Germans utilized this evidence of Communist terror to discredit the Soviet Union internationally, it became one of the better researched sites of the politically motivated NKVD massacres among many in Ukraine.

Much as in the case of other massacres of people considered enemies of the people by the communist regime of Russia, the victims buried at Vinnytsia were mostly murdered in the local NKVD prison. Most were killed using a .22 calibre bullet fired into the back of the neck.[2] Because of the small calibre of the bullet, most victims had to be shot twice, and at least 78 of them had to be shot three times; 395 of the victims found there had their skulls broken in addition to traces of gunshot trauma[2] Almost all men whose remains were excavated had their hands tied. Older women were dressed in some form of clothing, whereas younger victims were buried naked.[2]

The executions were clandestine; the families were not informed of their relatives' fate. In rare cases the Soviet authorities claimed that the missing people had died of natural causes, had been sentenced to the Gulag in the Far North, or had been transferred to prisons in other parts of the Soviet Union.[2] Personal belongings, documents and trial documentation were not preserved and instead were buried in a separate pit not far from the mass graves.[2] 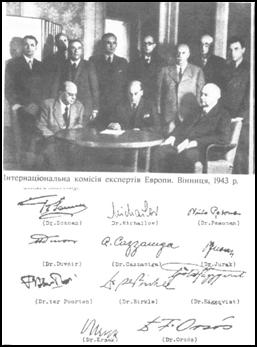 The International commission investigating the mass murder in Vinnytsia, 1943

The first examinations of the exhumed bodies were made by German, Ukrainian, and Russian doctors such as professor Gerhard Schrader of the University of Halle-Wittenberg, docent Doroshenko of Vinnytsia, and professor Malinin of Krasnodar, respectively. The excavations started in May 1943 at three different locations: the fruit orchard in the west, the central cemetery, and the People's Park. Most of the bodies were found in the fruit orchard (5,644 bodies). Altogether, 91 mass graves were discovered at the three different locations, and 9,432 bodies were exhumed; 149 of them were women. The excavations at the People's Park were not finished, though many more bodies were thought to be buried there.[3]

After a preliminary investigation conducted by Professor Schrader's team, two teams of medical examiners were invited — one international and the other made up of 13 experts from different universities in Nazi Germany. An international commission of experts in anatomy and forensic pathology was invited from eleven countries in Europe. The experts were the following:[4]

The international commission visited the mass graves between July 13 and July 15, 1943. The German commission completed its report on July 29, 1943. Both commissions determined that almost all of the victims were executed by two shots in the back of the head between 1937–1938.[5]

Four-hundred sixty-eight bodies were identified by people of Vinnytsia and the surroundings; the other 202 were identified on the basis of documents and evidence found in the graves. Most were identified as Ukrainians, but there were also 28 ethnic Poles.[6]

Besides the international expert commission, several other international delegations visited the sites in mid-1943. Among them were politicians and other officials from Bulgaria, Denmark, Greece, Finland, and Sweden.[7] Photos and results of the investigation were published in many countries in Europe, and were used by Germany in the propaganda war against the Soviet Union.

Most of the bodies were reburied after a burial service led by metropolit Vissarion of Odessa. The service was also attended by many other Orthodox bishops and foreign church officials.[8]

A monument was also erected to the "Victims of Stalinist Terror". Later the Soviet authorities rededicated the monument to the "Victims of Nazi Terror", finally completely removing it and creating an entertainment park in its place. In the last ten years a new monument has been constructed at the burial site in the park; it only refers to "victims of totalitarianism".[5] During Soviet times, information about the massacre was disseminated and investigated by the Ukrainian diaspora in the West. The mass murder in Vinnytsia was an officially forgotten topic in Ukraine until 1988.[1]