Vinton Gray "Vint" Cerf[1] (/ˈsɜːrf/; born June 23, 1943) is an American Internet pioneer, who is recognized as one of[5] "the fathers of the Internet",[6] sharing this title with fellow engineers Bob Kahn[7][8] and Donald Davies.[9][10] His contributions have been acknowledged and lauded, repeatedly, with honorary degrees and awards that include the National Medal of Technology,[1] the Turing Award,[11] the Presidential Medal of Freedom,[12] the Marconi Prize and membership in the National Academy of Engineering.

In the early days, Cerf was a manager for the United States' Defense Advanced Research Projects Agency (DARPA) funding various groups to develop TCP/IP technology. When the Internet began to transition to a commercial opportunity during the late 1980s,[citation needed] Cerf moved to MCI where he was instrumental in the development of the first commercial email system (MCI Mail) connected to the Internet.

Cerf was instrumental in the funding and formation of ICANN from the start. He waited in the wings for a year before he stepped forward to join the ICANN Board, eventually becoming chairman. He was elected as the president of the Association for Computing Machinery in May 2012,[13] and in August 2013 he joined the Council on CyberSecurity's Board of Advisors.[14]

Cerf is also known for his sartorial style, typically appearing in three-piece suit—a rarity in an industry known for its casual dress norms.[15][16]

Cerf was born in New Haven, Connecticut, the son of Muriel (née Gray), a housewife, and Vinton Thruston Cerf, an aerospace executive.[17][18] Cerf went to Van Nuys High School in California along with Jon Postel and Steve Crocker; he wrote the former's obituary. Both were also instrumental in the creation of the Internet. Cerf's first job after obtaining his B.S. degree in mathematics from Stanford University was at IBM, where he worked for two years as a systems engineer supporting QUIKTRAN.[1] He left IBM to attend graduate school at UCLA where he earned his M.S. degree in 1970 and his PhD degree in 1972.[4][19] During his graduate student years, he studied under Professor Gerald Estrin, worked in Professor Leonard Kleinrock's data packet networking group that connected the first two nodes of the ARPANet,[20] the predecessor[20] to the Internet, and "contributed to a host-to-host protocol" for the ARPANet.[21] While at UCLA, he also met Robert E. (Bob) Kahn, who was working on the ARPANet hardware architecture.[21] After receiving his doctorate, Cerf became an assistant professor at Stanford University from 1972–1976, where he conducted research on packet network interconnection protocols and co-designed the DoD TCP/IP protocol suite with Kahn.[21] Cerf then moved to DARPA in 1976, where he stayed until 1982. 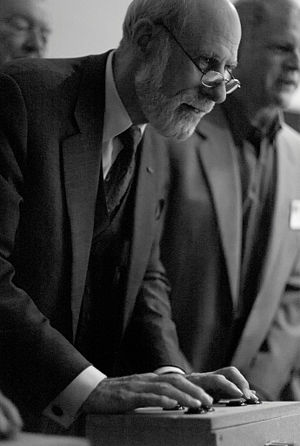 As vice president of MCI Digital Information Services from 1982 to 1986, Cerf led the engineering of MCI Mail, the first commercial email service to be connected to the Internet. In 1986, he joined Bob Kahn at the Corporation for National Research Initiatives as its vice president, working with Kahn on Digital Libraries, Knowledge Robots, and gigabit speed networks. It was during this time, in 1992, that he and Kahn, among others, founded the Internet Society (ISOC) to provide leadership in education, policy and standards related to the Internet. Cerf served as the first president of ISOC. Cerf rejoined MCI during 1994 and served as Senior Vice President of Technology Strategy. In this role, he helped to guide corporate strategy development from a technical perspective. Previously, he served as MCI's senior vice president of Architecture and Technology, leading a team of architects and engineers to design advanced networking frameworks, including Internet-based solutions for delivering a combination of data, information, voice and video services for business and consumer use.

During 1997, Cerf joined the Board of Trustees of Gallaudet University, a university for the education of the deaf and hard-of-hearing.[22] Cerf himself is hard of hearing.[23] He has also served on the university's Board of Associates.[24]

Cerf, as leader of MCI's internet business, was criticized due to MCI's role in providing the IP addresses used by Send-Safe.com, a vendor of spamware that uses a botnet in order to send spam. MCI refused to terminate the spamware vendor.[25][26] At the time, Spamhaus also listed MCI as the ISP with the most Spamhaus Block List listings.[27]

Cerf has worked for Google as a Vice President and Chief Internet Evangelist since October 2005.[3] In this function he has become well known for his predictions on how technology will affect future society, encompassing such areas as artificial intelligence, environmentalism, the advent of IPv6 and the transformation of the television industry and its delivery model.[28]

Since 2010, Cerf has served as a Commissioner for the Broadband Commission for Digital Development, a UN body which aims to make broadband internet technologies more widely available.

Cerf joined the board of the Internet Corporation for Assigned Names and Numbers (ICANN) in 1999, and served until November 2007.[29] He was chairman from November 2000 to his departure from the Board.

Cerf was a member of Bulgarian President Georgi Parvanov's IT Advisory Council (from March 2002 - January 2012). He is also a member of the Advisory Board of Eurasia Group, the political risk consultancy.[30]

Cerf is also working on the Interplanetary Internet, together with NASA's Jet Propulsion Laboratory and other NASA laboratories. It will be a new standard to communicate from planet to planet, using radio/laser communications that are tolerant of signal degradations including variable delay and disruption caused, for example, by celestial motion.[31]

On February 7, 2006, Cerf testified before the U.S. Senate Committee on Commerce, Science, and Transportation's hearing on network neutrality. Speaking as Google's Chief Internet Evangelist, Cerf noted that nearly half of all consumers lacked meaningful choice in broadband providers and expressed concerns that without network neutrality government regulation, broadband providers would be able to use their dominance to limit options for consumers and charge companies like Google for their use of bandwidth.[32]

Cerf currently serves on the board of advisors of Scientists and Engineers for America, an organization focused on promoting sound science in American government.[33] He also serves on the advisory council of CRDF Global (Civilian Research and Development Foundation) and was on the International Multilateral Partnership Against Cyber Threats (IMPACT) International Advisory Board.[34]

Cerf is chairman of the board of trustees of ARIN, the Regional Internet Registry (RIR) of IP addresses for United States, Canada, and part of the Caribbean.[35] Until Fall 2015, Cerf chaired the board of directors of StopBadware, a non-profit anti-malware organization that started as a project at Harvard University's Berkman Center for Internet & Society.[36][37] Cerf is on the board of advisors to The Liquid Information Company Ltd of the UK, which works to make the web more usefully interactive and which has produced the Mac OS X utility called ‘Liquid'.[38] Vint Cerf is a member of the CuriosityStream Advisory Board.[39]

During 2008 Cerf chaired the Internationalized domain name (IDNAbis) working group of the IETF.[40] In 2008 Cerf was a major contender to be designated the US's first Chief Technology Officer by President Barack Obama.[41] Cerf is the co-chair of Campus Party Silicon Valley, the US edition of one of the largest technology festivals in the world, along with Al Gore and Tim Berners-Lee.[42] From 2009-2011, Cerf was an elected member of the Governing Board of the Smart Grid Interoperability Panel (SGIP). SGIP is a public-private consortium established by NIST in 2009 and provides a forum for businesses and other stakeholder groups to participate in coordinating and accelerating development of standards for the evolving Smart Grid.[43] Cerf was elected to a two-year term as President of the Association for Computing Machinery (ACM) beginning July 1, 2012.[44] On January 16, 2013, US President Barack Obama announced his intent to appoint Cerf to the National Science Board.[45] 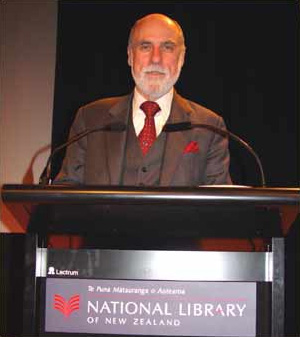 Cerf speaking at the National Library of New Zealand 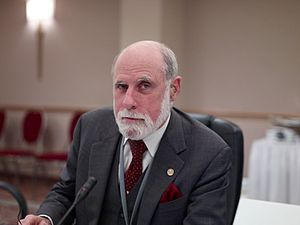