Visual merchandising is the activity and profession of developing the floor plans and three-dimensional displays in order to maximize sales.[1]

Both goods or services can be displayed to highlight their features and benefits. The purpose of such visual merchandising is to attract, engage, and motivate the customer towards making a purchase.

When the giant nineteenth century dry goods establishments like Marshall Field & Co. shifted their business from wholesale to retail, the visual display of goods became necessary to attract the general consumers. The store windows were often used to attractively display the store's merchandise. Over time, the design aesthetic used in window displays moved indoors and became part of the overall interior store design, eventually reducing the use of display windows in many suburban malls.[citation needed]

In the twentieth century, well-known artists such as Salvador Dalí[2] and Andy Warhol [3][4] created window displays.

In the beginning of twenty-first century visual merchandising is forming as a sсience. Nowadays, Visual Merchandising became one of the major tool of business promotion which is widely used to attract customers and increase sales.[5] 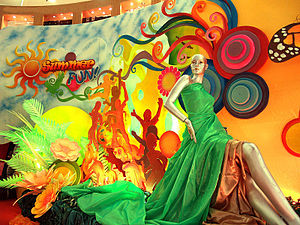 Visual merchandising builds upon or augments the retail design of a store. It is one of the final stages in setting out a store in a way customers find attractive and appealing.

Many elements can be used by visual merchandisers in creating displays including color,[6] lighting, space, product information, sensory inputs (such as smell, touch, and sound), as well as technologies such as digital displays and interactive installations.

As methods of visual merchandising [7] can be used color and style, symmetry and rhythm, face and side presentation etc.[8]

A floor map helps visual merchandisers to find the best place for garments, color stories of clothes and footwear in the shop.[9] It is a kind of floor plan with merchandise marked.

Window displays are often used by stores to entice customers into the store. Store visual merchandisers will dress the window in current season trends - often including fully dressed mannequins as well as accessories on plinths or hanging from special display equipment.

A study in 2002 (Sen et al, 2002)[11] found that clothing retailers will have most success enticing their customers into their store my focusing on communicating current fashion trends and styling suggesting and ensure that they have a strong store image portrayed in the window display. Sen et al’s study was an in-depth analysis of the various factors of window displays and its findings argue that stylisation and display of clothing, instead of atmospherics, play a large part in consumer behavior and purchasing.

Display windows may also be used to advertise seasonal sales or inform passers-by of other current promotions.

Restaurants, grocery stores, convenience stores, etc. use visual merchandising as a tool to differentiate themselves in a saturated market.