Vital signs (often shortened to just vitals) are a group of the 4 to 6 most important signs that indicate the status of the body’s vital (life-sustaining) functions. These measurements are taken to help assess the general physical health of a person, give clues to possible diseases, and show progress toward recovery.[1][2] The normal ranges for a person’s vital signs vary with age, weight, gender, and overall health.[3]

Early warning scores have been proposed that combine the individual values of vital signs into a single score. This was done in recognition that deteriorating vital signs often precede cardiac arrest and/or admission to the intensive care unit. Used appropriately, a rapid response team can assess and treat a deteriorating patient and prevent adverse outcomes.[6][7][8]

There are four primary vital signs which are standard in most medical settings:

The equipment needed is a thermometer, a sphygmomanometer, and a watch. Though a pulse can be taken by hand, a stethoscope may be required for a patient with a very weak pulse.

Temperature recording gives an indication of core body temperature which is normally tightly controlled (thermoregulation) as it affects the rate of chemical reactions.

Temperature depression (hypothermia) also needs to be evaluated. It is also noteworthy to review the trend of the patient's temperature. A patient with a fever of 38 °C does not necessarily indicate an ominous sign if his previous temperature has been higher. Body temperature is maintained through a balance of the heat produced by the body and the heat lost from the body.

Temperature is commonly considered to be a vital sign most notably in a hospital setting. EMTs (Emergency Medical Technicians), in particular, are taught to measure the vital signs of: respiration, pulse, skin, pupils, and blood pressure as "the 5 vital signs" in a non-hospital setting.[9]

Varies with age, but the normal reference range for an adult is 16–20 breaths/minute (RCP 2012). The value of respiratory rate as an indicator of potential respiratory dysfunction has been investigated but findings suggest it is of limited value. Respiratory rate is a clear indicator of acidotic states, as the main function of respiration is removal of CO2 leaving bicarbonate base in circulation.

The blood pressure is recorded as two readings: a high systolic pressure, which occurs during the maximal contraction of the heart, and the lower diastolic or resting pressure. A normal blood pressure would be 120 being the systolic over 80, the diastolic. Usually the blood pressure is read from the left arm unless there is some damage to the arm. The difference between the systolic and diastolic pressure is called the pulse pressure. The measurement of these pressures is now usually done with an aneroid or electronic sphygmomanometer. The classic measurement device is a mercury sphygmomanometer, using a column of mercury measured off in millimeters. In the United States and UK, the common form is millimeters of mercury, whilst elsewhere SI units of pressure are used. There is no natural 'normal' value for blood pressure, but rather a range of values that on increasing are associated with increased risks. The guideline acceptable reading also takes into account other co-factors for disease. Therefore, elevated blood pressure (hypertension) is variously defined when the systolic number is persistently over 140–160 mmHg. Low blood pressure is hypotension. Blood pressures are also taken at other portions of the extremities. These pressures are called segmental blood pressures and are used to evaluate blockage or arterial occlusion in a limb (see Ankle brachial pressure index).

In the U.S., in addition to the above four, it is required to record the patients Height, Weight, and Body Mass Index.[10]

The "fifth vital sign" may refer to a few different parameters.

There is no standard "sixth vital sign"; its use is more informal and discipline-dependent than the above.

Children and infants have respiratory and heart rates that are faster than those of adults as shown in the following table: 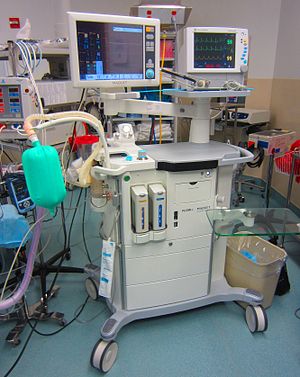 An anesthetic machine with integrated systems for monitoring of several vital parameters, including blood pressure and heart rate.

Monitoring of vital parameters most commonly include at least blood pressure and heart rate, and preferably also pulse oximetry and respiratory rate. Multimodal monitors that simultaneously measure and display the relevant vital parameters are commonly integrated into the bedside monitors in critical care units, and the anesthetic machines in operating rooms. These allow for continuous monitoring of a patient, with medical staff being continuously informed of the changes in general condition of a patient.

While monitoring has traditionally been done by doctors, a number of companies are developing devices which can be used by consumers themselves. These include Scanadu and Azoi.