Vitebsk or Vitsebsk (Belarusian: Ві́цебск, Łacinka: Viciebsk, pronounced [ˈvʲitsʲepsk]; Russian: Ви́тебск, pronounced [ˈvʲitʲɪpsk]; Polish: Witebsk, Yiddish: וויטעבסק‎), is a city in Belarus. The capital of the Vitebsk Region, in 2004 it had 342,381 inhabitants, making it the country's fourth largest city. It is served by Vitebsk Vostochny Airport and Vitebsk air base.

File:Church of Christ Resurrection in Viciebsk, J. Pieška.jpg
View of Vitebsk in the early 19th century.

Vitebsk developed from a river harbor where the Vitba River (Віцьба, from which it derives its name) flows into the larger Western Dvina, which is spanned in the city by the Kirov Bridge.

Archaeological research indicates that at the mouth of Vitba there were settlements by Baltic tribes, which were replaced in the 9th century by Slavic tribes Krivichs. According to the Chronicle of Michael Brigandine (1760), Vitebsk (also known mentioned as Dbesk, Vidbesk, Videbsk, Vitepesk, Vitbesk) was founded by Princess Olga of Kiev in 974. Other versions give 947 or 914. Academician Boris Rybakov and historian Leonid Alekseyev, based on the chronicles, have come to the conclusion that Princess Olga of Kiev could have established Vitebsk in 947. Leonid Alekseyev suggested that the chroniclers, moving the date from the account of the Byzantine era (since the creation of the world) to a new era, got the year 947, but later mistakenly written in copying manuscripts 974. an important place on trade route from the Varangians to the Greeks, by the end of the 12th century Vitebsk became a center of trade and commerce, became the center of an independent principality, following Polotsk, and at times, Smolensk and Kiev princes.

The official year of founding Vitebsk is 974, based on an anachronistic legend that it was founded by Olga of Kiev, but the first mention in historical record is from 1021, when Yaroslav the Wise of Kiev gave it to Bryachislav Izyaslavich, Prince of Polotsk.[2]

In the 12th and 13th centuries Vitebsk was the capital of the Principality of Vitebsk, an appanage principality which thrived at the crossroads of the river routes among the Baltic and Black seas. In 1320 the city was incorporated into the Grand Duchy of Lithuania as a dowry of the Princess Maria, the first wife of Grand Duke of Lithuania Algirdas. By 1351 the city had erected a stone Upper and Lower Castle, the prince's palace. In 1410 Vitebsk participated in the Battle of Grunwald. In 1597, the townsfolk of Vitebsk were privileged with Magdeburg rights. However, the rights were taken away in 1623 after the citizens revolted against the imposed Union of Brest and killed Archbishop Josaphat Kuntsevych. During the First Partition of Poland in 1772, Vitebsk was annexed by the Russian Empire.

Under Russian Empire the historic centre of Vitebsk was rebuilt with Neoclassical architecture.

By the World War II, Vitebsk had a significant Jewish population: according to Russian census of 1897, out of the total population of 65,900, Jews constituted 34,400 (around 52% percent).[3] The most famous of its Jewish natives was the painter Marc Chagall.

During World War II, the city was under the Nazi Germany occupation (10 July 1941 - 26 June 1944). Much of the old city was destroyed in the ensuing battles between the Germans and the Red Army soldiers. Most of the local Jews perished in the Vitebsk Ghetto massacre. 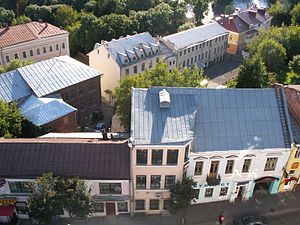 In the first postwar five-year period the city was rebuilt. In the structure of its industrial complex stands machinery and light industry, and machine tools.

In 1959, TV tower was commissioned and started broadcasting the 1st Central Television program. In the same year during excavations on the Liberation Square, a birch-bark scroll was found dating from the turn of the 13th and 14th centuries. It read:

From Stpana to Nezhilovi. Also, if hast sold trousers, buy me rye for 6 hryvnia. And if some didst not sold, send to my person. And if thou hast sold, do good to buy rye for me

In January 1991, Vitebsk celebrated the first Marc Chagall Festival. In June 1992, a monument to Chagall was erected on his native Pokrovskaja street and a memorial inscription was placed on the wall of his house.

Since 1992, Vitebsk has been hosting the annual Slavianski Bazaar in Vitebsk, an international art festival. The main participants are artists from Russia, Belarus and Ukraine, with guests from many other countries, both Slavic and non-Slavic. In 1999, a free economic zone "Vitebsk" was established. The city built the Ice Sports Palace, there was a remarkable improvement and expansion in the city. The central stadium was reconstructed and the Summer Amphitheatre for the international art festival, the Slavic Bazaar, the railway station and other historical sites and facilities were restored, and a number of new churches and other public facilities were built, together with the construction of new residential areas. 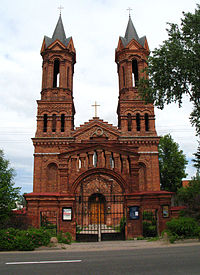 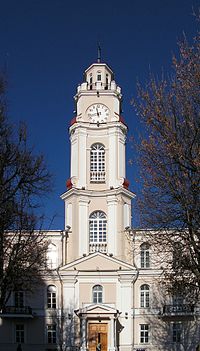 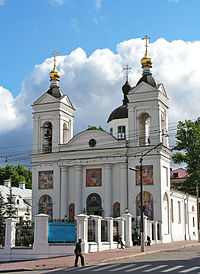 Cathedral of the Blessed Virgin Mary in Vitebsk

The city long preserved one of the oldest buildings in the country: the Annunciation Church. This magnificent six-pillared building dates back to the period of Kievan Rus. It was constructed in the 1140s, rebuilt in the 14th and 17th centuries, repaired in 1883 and destroyed by the Communist administration in 1961. Scarce remains of the church were conserved until 1992, when it was restored to its presumed original appearance, although it's a moot point how the church looked like when it was first built.[4]

Churches from the Polish-Lithuanian period were likewise destroyed, although the Resurrection Church (1772–77) has been rebuilt. The Orthodox cathedral, dedicated to the Intercession of the Theotokos, was erected in 1760. There are also the town hall (1775); the Russian governor's palace, where Napoleon celebrated his 43rd birthday in 1812; the Neo-Romanesque Roman Catholic cathedral (1884–85); and an obelisk commemorating the centenary of the Russian victory over Napoleon.

Vitebsk is also home to a lattice steel TV tower carrying a horizontal cross on which the antenna mast is guyed. This tower, which is nearly identical to that at Grodno, but a few metres shorter (245 metres in Vitebsk versus 254 metres at Grodno) was completed in 1983. The city is also home to the Marc Chagall Museum and the Vitebsk regional museum.