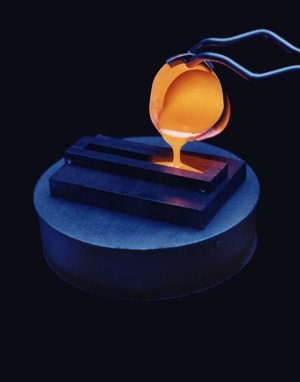 Vitrification (from Latin vitreum, "glass" via French vitrifier) is the transformation of a substance into a glass,[1] that is to say a non-crystalline amorphous solid. In ceramics it gives impermeability to water.[2]

Usually, it is achieved by rapidly cooling a liquid through the glass transition. Certain chemical reactions also result in glasses. An important application is the vitrification of an antifreeze-like liquid in cryopreservation.

In a wider sense, the embedding of material in a glassy matrix is also called vitrification. An important application is the vitrification of radioactive waste to obtain a stable compound that is suitable for ultimate disposal.

Vitrification is the progressive partial fusion of a clay, or of a body, as a result of a firing process. As vitrification proceeds the proportion of glassy bond increases and the apparent porosity of the fired product becomes progressively lower.[4][5] Vitreous bodies have open porosity, and may be either opaque or translucent. In this context 'zero porosity'; may be defined as less than 1% water absorption. However, various standard procedures define the conditions of water absorption. [6][7][8] An example is by ASTM, who state "The term vitreous generally signifies less than 0.5 % absorption. except for floor and wall tile and low-voltage electrical insulators which are considered vitreous up to 3 % water absorption."[9]

When sucrose is cooled slowly it results in crystal sugar (or rock candy), but when cooled rapidly it can form syrupy cotton candy (candyfloss). In the process of vitrification the solid waste is exposed to heat and is converted into a sort of glass-like substance.

Vitrification can also occur when starting with a liquid such as water, usually through very rapid cooling or the introduction of agents that suppress the formation of ice crystals. This is in contrast to ordinary freezing which results in ice crystal formation. Additives used in cryobiology or produced naturally by organisms living in polar regions are called cryoprotectants.

Arctic frogs and some other ectotherms naturally produce glycerol or glucose in their livers to reduce ice formation. When glucose is used as a cryoprotectant by arctic frogs, massive amounts of glucose are released at low temperature and a special form of insulin allows for this extra glucose to enter the cells. When the frog rewarms during spring, the extra glucose must be rapidly eliminated, but stored. Arctic insects also use sugars as cryoprotectants. Arctic fish use antifreeze proteins, sometimes appended with sugars, as cryoprotectants.

Ordinary soda-lime glass, used in windows and drinking containers, is created by the addition of sodium carbonate and lime (calcium oxide) to silicon dioxide. Without these additives silicon dioxide will require very high temperature to obtain a melt and subsequently (with slow cooling) a glass.

Vitrification is a proven technique in the disposal and long-term storage of nuclear waste or other hazardous wastes[13] in a method called geomelting. Waste is mixed with glass-forming chemicals in a furnace to form molten glass that then solidifies in canisters, thereby immobilizing the waste. The final waste form resembles obsidian and is a non-leaching, durable material that effectively traps the waste inside. The waste can be stored for relatively long periods in this form without concern for air or groundwater contamination. Bulk vitrification uses electrodes to melt soil and wastes where they lay buried. The hardened waste may then be disinterred with less danger of widespread contamination. According to the Pacific Northwest National Labs, "Vitrification locks dangerous materials into a stable glass form that will last for thousands of years."[14]

Ethylene glycol is used as automotive antifreeze and propylene glycol has been used to reduce ice crystals in ice cream, making it smoother.

Vitrification in cryopreservation is used as a common method to preserve, for example, human egg cells (oocytes) (in oocyte cryopreservation) and embryos (in embryo cryopreservation). For years, glycerol has been used in cryobiology as a cryoprotectant for blood cells and bull sperm, allowing storage at liquid nitrogen temperatures. However, glycerol cannot be used to protect whole organs from damage. Instead, many biotechnology companies are researching the development of other cryoprotectants more suitable for such uses. A successful discovery may eventually make possible the bulk cryogenic storage (or "banking") of transplantable human and xenobiotic organs. A substantial step in that direction has already occurred. Twenty-First Century Medicine has vitrified a rabbit kidney to -135 °C with their proprietary vitrification cocktail. Upon rewarming, the kidney was successfully transplanted into a rabbit, with complete functionality and viability, able to sustain the rabbit indefinitely as the sole functioning kidney.[15]

Currently, vitrification techniques have only been applied to brains (neurovitrification) by Alcor and to the upper body by the Cryonics Institute, but research is in progress by both organizations to apply vitrification to the whole body.