The viviparous lizard or common lizard, Zootoca vivipara (formerly Lacerta vivipara), is a Eurasian lizard. It lives farther north than any other reptile species, and most populations are viviparous (giving birth to live young), rather than laying eggs as most other lizards do. It is the only species in the monotypic genus Zootoca.[3]

Zootoca vivipara can be seen in a variety of different colors. Female Zootoca vivipara undergo color polymorphism (biology) more commonly than males. A female lizard's display differs in ventral coloration, ranging from pale yellow to bright orange and a mixed coloration. There have been many hypothesis for the genetic cause of this polymorphic coloration. These hypothesis test for coloration due to thermoregulation, predator avoidance, and social cues, specifically sexual reproduction. Through an experiment conducted by Vercken et. al., color polymorphism in viviparous lizard is caused by social cues, rather than the other hypotheses. More specifically, the ventral coloration that is seen in female lizards is associated with patterns of sexual reproduction and sex allocation. [4]

The length of the body is less than 12 cm (5 in) (excluding the tail). The tail is up to twice as long as the body, although it is often partially or wholly lost. The limbs are short, and the head is rather round. Males have more slender bodies than females. The neck and the tail are thick. The collar and other scales seem jagged.

The colour and patterning of this species is variable. The main colour is typically medium brown, but it can be also grey, olive brown or black. Females may have dark stripes on their flanks and down the middle of their backs. Sometimes females also have light-coloured stripes, or dark and light spots along the sides of their backs. Most males and some females have dark spots in their undersides. Males have brightly coloured undersides – typically yellow or orange, but more rarely red. Females have paler, whitish underparts. The throat is white, sometimes blue.

The viviparous lizard is widely distributed throughout Europe and Asia. Its range extends to the north of the Arctic Circle. It ranges from Ireland to Hokkaidō and Sakhalin. It is absent from most of the Mediterranean area, although it occurs in northern Spain, northern Italy, Serbia, Republic of Macedonia and Bulgaria. It is also absent from the area surrounding the Black Sea. 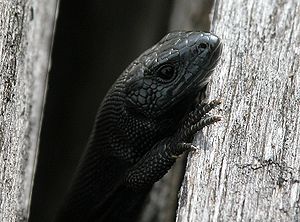 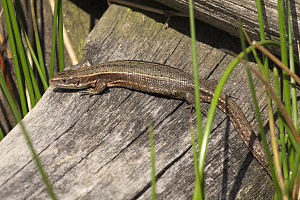 In the southern parts of its distribution range, the species lives at high elevations, occurring as high as 3,000 metres (9,800 ft) above sea level in the Alps. In these areas, the viviparous lizard lives in damp locations, often near water, including meadows, swamps, rice fields, by brooks and in damp forests. In the northern part of the range, the species is also found in lowlands, where it occurs in drier environments, including open woodland, meadows, moorland, heathland, fens, dunes, rocks, roadsides, hedgerows and gardens. It lives mainly on the ground, although it may climb onto rocks, logs and low-growing vegetation.

The viviparous lizard feeds on invertebrates, mostly small insects. It shakes larger prey in its jaws before chewing it and swallowing it whole. In early spring, late autumn, and cool summer days, it basks in the sun to reach its optimum body temperature, which is about 30°C (86°F).

These lizards mate in April or May. Males take females in their jaws before mating – if the female is not interested, she will bite the male fiercely. The offspring develop inside the female for about three months.

The name of the species is derived from its ability to give birth to live young, an adaptation to a cool climate, but some southern populations are oviparous (egg-laying). The three to 10 young (or eggs) are usually produced in July. The blackish young measure about 3 cm (1.2 in), and when first born are surrounded by egg membrane, from which they break free after about a day. Males reach sexual maturity at the age of two years, females at the age of three years. Individuals from viviparous and oviparous populations may be hybridized, but with significant embryonic malformation.[5] Viviparous Z. vivipara do develop placentae to facilitate pregnancy but there is no substantial transport of nutrients as seen in some other species of viviparous reptiles (e.g. Pseudemoia entrecasteauxii).

Due to the cool climate, in northern regions, viviparous lizards begin hibernation in September or October, underground or in log piles. Hibernation ends about mid-February. Further south, the species is active throughout the year.

The color polymorphism of female Zootoca vivipara has not been thoroughly studied in past years, regardless of the extensive research done on the species itself.[6] Female lizards exhibit three types of body coloration within a population: yellow, orange, and mixture of the two. These discrete traits are inherited maternally and exist throughout the individual’s lifetime.[6] The organism's color morphs are determined by their genotype as well as their environment.

The frequency of multiple morphs occurring in a population varies with the level of population density and frequency-dependent environments.[6] These factors cause the lizards to vary in terms of their fitness (clutch size, sex ratio, hatching success). [6] In lower density populations, color polymorphism is more prevalent. [4] This is because viviparous lizards thrive in environments where intraspecific competition is low.[7] Increased competition among individuals results in lower survival rates of lizards. Additionally, female lizards disperse through habitats based on the frequency of color types that are already present in the population [7] Their reproductive abilities vary according to this frequency-dependent environment. The number of offspring they produce correlates with the color morph: yellow females produce the fewest offspring, while orange females produce more than yellow, but fewer than mixed females, which produce the most offspring.[4] The amount of offspring produced varies in regards to color frequencies in the population; for example, if yellow females have higher density within the population, clutch size for orange lizards is usually lower. [4]

Orange females are more sensitive to intraspecific and color-specific competition.[4] They have smaller clutch sizes when the density of the population is high, or when the number of yellow females in the population was high. This could be due to their need to conserve energy for survival and reproductive events.[4] Their color morph remains the population due to the trade-off between the size of offspring and the clutch size. Offspring born in smaller clutches are often larger in size and thus have higher survival.[4] Natural selection will favor individuals with larger size because of their advantage in physical competition with others. Yellow females have larger clutch sizes early in their life, but their hatch success decreases as the female ages.[4] Their reproductive viability decreases, resulting in fewer offspring throughout their lifetime. Yellow morphs remain in the population due to their large clutch size, which causes an increased frequency of those females.[4] Selection favors the yellow morph because of the ability to produce large clutch sizes, which increases the female's fitness (biology). In mixed-colored females, reproductive success is less sensitive to competition and frequency-dependent environments.[4] Since these lizards show a mixture of yellow and orange coloration, they adopt benefits from both of the morphs. As a result, they can maintain high reproductive success and hatching success with large clutch sizes.[4] Their color morph remains in the population due to its high fitness, which selection will favor.