From Infogalactic: the planetary knowledge core
Jump to: navigation, search
This article is about the city. For other uses, see Vladimir.

Vladimir was one of the medieval capitals of Russia, with significant buildings surviving from the 12th century. Two of its Russian Orthodox cathedrals, a monastery, and associated buildings have been designated as among the White Monuments of Vladimir and Suzdal, a UNESCO World Heritage Site. In the past, the city was also known as Vladimir-on-Klyazma (Владимир-на-Клязьме)[14] and Vladimir-Zalessky (Владимир-Залесский), to distinguish it from another Vladimir in Volhynia (modern Ukraine).

Traditionally, the founding date of Vladimir has been acknowledged as 1108, as the first mention of Vladimir in the Primary Chronicle appears under that year. This view attributes the founding of the city, and its name, to Vladimir Monomakh, who inherited the region as part of the Rostov-Suzdal Principality in 1093. It is named there as Volodymyr.[15] Being established long after the city of Vladimir in Volhynia, initially it was named Vladimir-on-Klyazma. In 1958, the 850th anniversary of the city foundation was celebrated, with many monuments from the celebrations adorning the city.

In the 1990s, a new opinion developed that the city is older than this. Scholars reinterpreted certain passages in the Hypatian Codex, which mentions that the region was visited by Vladimir the Great, the "father" of Russian Orthodoxy, in 990, so as to move the city foundation date to that year. The defenders of the previously uncontested founding year of 1108 dispute the claims of those who support the new date, arguing that the new theory was fabricated in order to provide a reason to have a celebration in 1995.

The neighboring town of Suzdal, for instance, was mentioned in 1024. Its 12th-century inhabitants alluded to Vladimir as a young town and treated its rulers with arrogance. In the words of a major chronicle, they said that the people of Vladimir were "their kholops and scions". In the seniority conflicts of the 12th and early 13th centuries, Vladimir was repeatedly described as a "young town" compared to Suzdal and Rostov. Nevertheless, the Charter of Vladimir, the basic law of the city passed in 2005, explicitly mentions 990 as the date of the city's foundation.[16]

The city's most historically significant events occurred after the turn of the 12th century. Serving its original purpose as a defensive outpost for the Rostov-Suzdal Principality, Vladimir had little political or military influence throughout the reign of Vladimir Monomakh (1113–1125), or his son Yury Dolgoruky ("Far-Reaching") (1154–1157).

File:Успенский собор-2 (by Hd Elen).jpg
Dormition Cathedral was a venerated model for cathedrals all over Russia
File:Vladimir demetrios.jpg
St. Demetrius' Cathedral, shown on this 1912 photo, is famous for its masterfully carved exterior, representing the Biblical story of King David.

Under Dolgoruky's son, Andrey Bogolyubsky (1157–1175) (also known as Andrew the Pious), the city became the center of the Vladimir-Suzdal Principality. It had a Golden Age, which lasted until the Mongol invasion of Rus' in 1237. During this time, Vladimir enjoyed immense growth and prosperity. Andrey oversaw the building of the city's Golden Gates and the Dormition Cathedral. In 1164, Andrey attempted to establish a new metropolitanate in Vladimir, separate from that of Kiev. He was rebuffed by the Patriarch of Constantinople.[17]

Scores of Russian, German, and Georgian masons worked on Vladimir's white stone cathedrals, monastery, towers, and palaces. Unlike any other northern buildings, their exterior was elaborately carved with high relief stone sculptures. Only three of these edifices stand today: the Dormition Cathedral, the Cathedral of Saint Demetrius, and the Golden Gate. They are included among the White Monuments of Vladimir and Suzdal, designated as a UNESCO World Heritage Site. During Andrey's reign, a royal palace in Bogolyubovo was built, as well as the world-famous Church of the Intercession on the Nerl, now considered one of the jewels of ancient Russian architecture. Andrey was assassinated at his palace at Bogolyubovo in 1175. 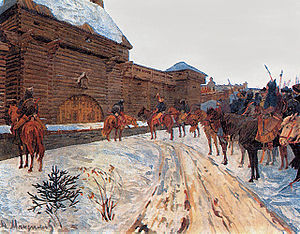 Vladimir was besieged by the Mongol-Tatars of the Golden Horde under Batu Khan. It was finally overrun on February 8, 1238. A great fire destroyed thirty-two limestone buildings on the first day alone, while the grand prince's family perished in a church where they sought refuge from the flames. The grand prince escaped, but was killed at the Battle of the Sit River the following month.

After the Mongols, Vladimir never fully recovered. The most important Rus' prince (usually the Prince of Moscow, but sometimes of Tver or another principality) was styled the Grand Prince of Vladimir, but the title had become an honorific symbol of majesty. From 1299 to 1325, the city was seat of the metropolitans of Kiev and All Rus', until Metropolitan Peter moved the see to Moscow.

The Grand Princes of Vladimir were originally crowned in Vladimir's Assumption Cathedral, but when Moscow superseded Vladimir in the 14th century as the seat of the Grand Prince, the Assumption Cathedral in the Moscow Kremlin became the site of their coronation. The Moscow cathedral was loosely copied by the Italian architect Aristotele Fioravanti from Vladimir's original.

After the rise of Moscow, Grand Princes of Moscow continued to build several new churches in Vladimir. Notable examples include the Annunciation Church at Snovitsy (ca. 1501), three kilometers northwest of the city, and a church in the Knyaginin nunnery (ca. 1505), with murals dating to 1648.

Remains of the prince-saint Alexander Nevsky were kept in the ancient Nativity abbey of Vladimir until 1703, when Peter the Great had them transferred to the Monastery (now Lavra) of Aleksandr Nevsky in St. Petersburg. The Nativity church (built in 1191–1196) collapsed several years later, after workmen tried to fashion more windows in its walls in an effort to brighten the interior.

In the years 1838-1840, Alexander Herzen exiled in Vladimir, passing through the city infamous "Vladimirka". In 1861, traffic on the route Moscow-Vladimir Moscow-Nizhny Novgorod Railway. Since December 1858 the city began to operate telegraph, in 1866 completed construction of water supply, with 1887 appeared telephone and on December 5, 1908 the first power. November 29, 1898 Vladimir provincial scientific archival commission was established.

After the establishment of Soviet power, many streets were renamed in Vladimir; most of the parish churches were closed and condemned to be demolished.

However, in the first decades of Soviet rule industrialization occurred in Vladimir. On January 14, 1929, the city became part of the newly formed Ivanovo Industrial Oblast.

On August 14, 1944, Vladimir became the administrative center of the region. In December 1944, based Vladimir Regional Library Gorky. In 1950 on the basis of teachers' institute created Vladimir Pedagogical Institute. On November 5, 1952 the first trolleybus line began to operate in the city.

In 1958 was created the Vladimir-Suzdal Historical -Architectural and Art Museum-Reserve, which is composed of a group of unique architectural monuments of Russian defense and church architecture, located in three cities - Vladimir, Suzdal and Gus-Khrustalny, as well as villages of Bogolyubovo and Kideksha.

Architecture of the Soviet period is represented by such structures as building complexes and polytechnic colleges, stadium "Torpedo" (1952), reinforced concrete arch bridge over the river Klyaz'ma (1960), the hotel Vladimir (1956), Drama Theatre (1971) and others. In 1971 the city was awarded the Order of Red Banner of Labor.

Vladimir is home to several electrical and chemical factories, several food processing plants and two large thermal power stations. Tourism related to the historical sites is a major contributor to the city economy.

The headquarters of the 27th Guards Rocket Army of the Strategic Missile Troops is located in the city. During the Cold War, Vladimir was host to the Dobrynskoye air force base. 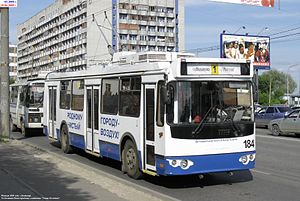 Since 1861, there has been a railway connection between Vladimir and Moscow.[18] Vladimir is also linked to Moscow and Nizhny Novgorod by the M7 highway. Local transport includes buses, trolleybuses,fixed-route minivans, and taxis.

Vladimir bus service links the city to all the district centers of Vladimir Oblast, as well as Moscow, Ivanovo, Kostroma, Nizhny Novgorod, Ryazan, Yaroslavl and other cities.

Developed suburban rail. Vladimir was the only city in Russia involving commuter trains at once with two Russian cities with subway. If you go by train from Vladimir, the nearest station in Moscow – "Novokosino", Nizhny Novgorod – "Moscow." In November 2012 Vladimir–Nizhny Novgorod train was canceled.

The city is served by the Semyazino Airport 5 km west of the city center.

Modern Vladimir is a part of the Golden Ring of the ancient Russian cities and a popular tourist destination. Its three chief monuments, White Monuments of Vladimir and Suzdal, inscribed by UNESCO on the World Heritage List, are the following:

Other remarkable monuments of pre-Mongol Russian architecture are scattered in the vicinity. For more information on them, see Suzdal, Yuriev-Polsky, Bogolyubovo, and Kideksha.

Vladimir is the site of the following education establishments:

Vladimir is also home to the Federal Centre for Animal Health and Welfare.

Vladimir is twinned with:[20] 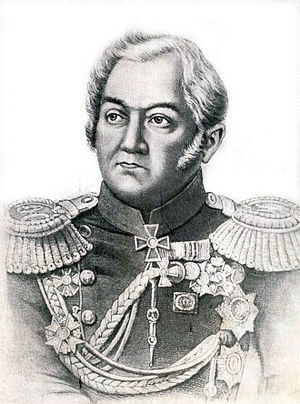