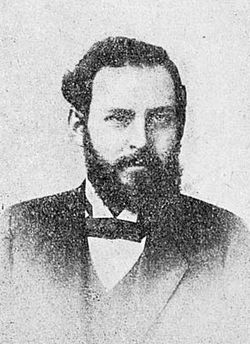 Vladimir Alexandrovich Rudnev was born August 8, 1874 (n.s.) in Tula, Russia, then part of the Russian empire headed by the Romanov dynasty.

In 1892, Rudnev entered Moscow University.[1] He became involved in revolutionary politics in 1896, activity which would lead to his expulsion from Moscow the following year.[1] He also adopted the surname "Bazarov" as an underground revolutionary pseudonym taking it from the Comtean positivist character in Turgenev's Fathers and Sons.[2] Thereafter, Bazarov returned home to Tula where, together with Alexander Bogdanov and Ivan Skvortsov-Stepanov, Bazarov organized a secret school for Tula workers.[1] Bogdanov resided at the house of Bazarov's father, and met his wife who worked for Alexander Rudenev. A guiding principle of this group was that the workers' movement should be led by workers themselves, assisted by educated members of the radical intelligentsia.[3]

Bazarov was expelled from Tula in 1899 and emigrated to Germany, settling in Berlin.[1] In the fall of 1900, Bazarov was instrumental in establishing a political organization called the "Neutral Group of Social-Democrats in Berlin." This organization dedicated itself to helping heal the split between the Union of Russian Social-Democrats Abroad, publishers of Rabochee Delo (The Workers' Cause), and the Emancipation of Labor Group, publishers of Iskra (The Spark). According to Bazarov, the Berlin group sent representatives to Geneva in an attempt to broker a reconciliation between these two groups of Marxist revolutionary groups.[4] Bazarov's Berlin group issued three or four political proclamations before disbanding in the summer of 1901.[4]

File:Materialism-and-Empirio-Criticism.jpg
Cover of the first edition of Lenin's Materialism and Empirio-Criticism: Critical Notes about One Reactionary Philosophy, published in 1909 against Alexander Bogdanov, Nikolai Valentinov, Vladimir Bazarov, and their co-thinkers.

In the fall of 1901, Bazarov returned to Russia to serve as a member of the Moscow Social Democratic Committee.[1] He was soon again arrested for his political activity, however, this time to be exiled for three years to Siberia.[1] In 1904, Bazarov joined the Bolshevik faction of the Russian Social Democratic Labor Party (RSDLP), an organization headed by V.I. Lenin.[1] Over the next several years, Bazarov wrote extensively for the Bolshevik party press, serving on the editorial board of the grouping's primary newspaper, Rabochii put' (The Workers' Path), and sitting as a member of the party's underground leadership in the country, the so-called "Bolshevik Center."[1]

Also in this period Bazarov joined with his old Tula comrades Ivan Skvortsov-Stepanov and Alexander Bogdanov in retranslating and publishing a new Russian-language edition of the three volumes of Capital by Karl Marx.[5] This edition of the book gained recognition as the basic Russian translation and was reissued for decades in the Soviet Union, although for political reasons any mention of the participation of Bazarov and Bogdanov in the translation was later avoided.[5]

Bazarov also became interested in philosophy during the first decade of the 20th Century, coming to reject Marx's formulaic dialectical materialism in favor of the use of the scientific method to observe and theorize about human behavior, as espoused by the Austrian Ernst Mach and the German-Swiss philosopher Richard Avenarius.[5] The Bolshevik supporters of the "empirical-criticism" of Mach and Avenarius, including Bazarov, Bogdanov, and Nikolai Valentinov, were soon the target of a bitter polemic by Lenin published in 1909, Materialism and Empirio-criticism. Bazarov subsequently moved away from membership and participation in the Bolshevik organization, while remaining politically radical.[1]

In 1911, Bazarov was arrested once again and was deported once more, this time a three-year sentence to Astrakhan.[1] In November 1912, Bazarov joined with Bogdanov, Anatoly Lunacharsky, Maxim Gorky, and Lenin, writing for a new paper in St. Petersburg called Pravda.[6]

Following the October Revolution of 1917, Bazarov moved to Kharkov in the Ukraine, where he wrote for various Menshevik publications.[5] In 1919 he published Na puti k sotsializmu (Khar'kov, 1919), for which he was attacked by Bukharin, who viewed him and Bogdanov as being part of a combined opposition espousing a theory of a "bureaucratic degeneration (the technico-intellectual bureaucracy, the 'organizing' caste)".

In 1922, Bazarov joined the staff of the State Planning Commission, where he met Vladimir Groman, with whom he would work intimately for the next half decade.[5] Bazarov and Groman worked together developing the basics of Soviet industrial planning, setting the foundation stones for the next half century of the Soviet economy. On November 21, 1923, Groman presented the Presidium of Gosplan with a paper entitled "Problems of Planning the National Economy as a Whole," in which Bazarov argued that the adoption of the mixed economy of the New Economic Policy actually accentuated rather than lessened the need for central economic planning.[8]

Together with Groman, Bazarov was influential in developing the idea that a diminishing rate of growth was an earmark of economies such as that of the Soviet Union which were in the process of recovery.[9] Although in retrospect the observation seems obvious, the "theory of the leveling-off curve" espoused by Groman and Bazarov postulated that an economy with substantial reserves of idle capacity would initially show an inordinately rapid pace of growth as productive capital returned to use, with this rate tapering off as available plant approached full capacity.[10]

In 1924 Bazarov published a pamphlet entitled Towards a Methodology for Strategic Planning in which he further expanded his ideas on the development of central planning procedures as the Soviet economy moved from recovery to expansion.[11] Bazarov remained convinced that central direction of economic investment would provide the impetus for accelerated economic growth, speaking in 1926 of the "hope to overtake and surpass in our development the advanced countries of the capitalist world."[12]

Bazarov was a staunch advocate of using material incentives to motivate the peasantry to expand agricultural output, declaring early in 1927 that "only by amply supplying the village with good industrial products at very low prices can we create a real impulse toward the development of our backward agriculture..."[13] In the wake of weak agricultural marketing by the peasantry in 1927 and 1928, Soviet political leaders moved another direction, however, returning to the coercive requisitioning methods first used during the earlier period of War Communism before moving to a radical drive for complete collectivization of agriculture at the end of the decade.

Bazarov was a voice in the Soviet planning apparatus for a rational rate of growth. In response to a draft Five-Year Plan prepared by the Supreme Council of National Economy (VSNKh) which posited industrial growth of 135% over the five economic years 1927/28 to 1932/33, Bazarov deemed the long-term possibilities "fascinating" and "enchanting."[14] Such a pace was soon dismissed as inadequate by those holding more extreme views, however, and Bazarov was sharply criticized for pessimism in underestimating "the advantages inherent in the Soviet system."[15] Ultimately, a growth of 179% over the five-year period was approved by Soviet planning authorities, and Bazarov, Groman, and others holding similar views favoring a less drastic rate of capital accumulation were shunted aside.[16]

Bazarov was arrested by the Soviet secret police during the summer of 1930. At his interrogation of August 15, 1930, he signed a deposition acknowledging his participation in a group with other economists who had been arrested and interrogated by the GPU, including his friend and co-worker Groman and former Socialist Revolutionary Party member Nikolai Kondratiev.[17]

In 1931 the Menshevik Trial was held charging "Mensheviks" in the state planning apparatus with the "wrecking" of Soviet industry through the setting of artificially low planning targets. Although Bazarov was not in the dock among the public defendants in this 1931 Menshevik Trial, his associate Groman was. Groman gave public testimony that he and Bazarov headed a counterrevolutionary group in Gosplan, purportedly organized in 1923, which attempted at "influencing the economic policy of the Soviet authorities so as to hold the position of 1923-25."[18] Historian Naum Jasny has speculated that Bazarov's failure to appear as a defendant at this major public trial was likely a reflection of the fact that "the GPU did not succeed in breaking him completely enough to make him a desirable member of the trial."[19]

Groman, the star figure among the accused, damned himself and his colleagues with testimony that at Gosplan they had spent their time

"Putting into the control figures and into the surveys of current business planning ideas and deliberately distorted appraisals antagonistic to the general Party line (lowering the rates of expansion of socialist construction, distorting the class approach, exaggerating the difficulties), stressing the signs of an impending catastrophe (Groman) or, what is close to this, assigning a negligible chance of success to the Party line directed toward the socialist attack (Bazarov, Gukhman)..."[20]

Although excluded from the public trial which besmirched him, Bazarov was tried in secret and sentenced to a term of prison for his alleged wrecking activities.[21] A December 1931 letter from the USSR published in the Menshevik journal Sotsialisticheskii vestnik (Socialist Herald) reported that Bazarov was being held at that time in a political "isolator" at Yaroslavl.[22]

In 1999 a two volume collection of documents relating to the 1931 Menshevik Trial was published in Russia. Included were the text of several handwritten depositions collected from Bazarov during the process of his interrogation during the summer of 1930.[23]