Vladimir Nikolayevich Chelomey (Russian: Влади́мир Никола́евич Челоме́й; Ukrainian: Володимир Миколайович Челомей; 30 June 1914 – 8 December 1984) was a Soviet mechanics scientist, aviation and missile engineer. He invented the very first Soviet pulse jet engine and was responsible for the development of the world's first anti-ship cruise missiles and ICBM complexes like the UR-100, UR-200, UR-500 and UR-700.[1]

Chelomey was born in Siedlce, Lublin Governorate, Russian Empire (now Poland) into a family of Ukrainian Cosack origin. At the age of three months, his family fled to Poltava, when World War I came close to Siedlce.

When Vladimir was twelve years old, the family moved again to Kiev.

In 1932, Chelomey was admitted to the Kiev Polytechnic Institute (later the basis of Kiev Aviation Institute), where he showed himself as a student with outstanding talent. In 1936, his first book Vector Analysis was published. Studying at the institute, Chelomey also attended lectures on mathematical analysis, theory of differential equations, mathematical physics, theory of elasticity and mechanics in the Kiev University. He also attended lectures by Tullio Levi-Civita in the Ukrainian SSR Academy of Sciences. Namely in this time Chelomey became interested in mechanics and in the theory of oscillations and remained interested the rest of his life. In 1937, Chelomey graduated from the institute with honours. After that he worked there as a lecturer, defending a dissertation for the Candidate of Science (in 1939).[1]

From the beginning of the Great Patriotic War, Chelomey worked at the Baranov Central Institute of Aviation Motor Building (TsIAM) in Moscow, where he created the first Soviet pulsating air jet engine in 1942, independently of similar contemporary developments in Nazi Germany.

In the summer of 1944, it became known that Nazi Germany used V-1 cruise missiles against Southern England. On 9 October 1944, following a decision by the USSR State Defense Committee and People's Commissar for Aviation Industry Alexey Shakhurin, Chelomey was appointed the Director and Chief Designer of Plant N51 (its previous director Nikolay Polikarpov having died a short time before). Chelomey was to design, build, and test the first Soviet cruise missile at the earliest possible date. As early as December 1944, the missile, code-named 10Kh, was test fired from Petlyakov Pe-8 and Tupolev Tu-2 aircraft.[1]

Following his success with the 10Kh, the USSR Special Design Bureau on designing pilot-less aircraft (OKB-52) was established under Chelomey's leadership. In 1955, Chelomey was appointed the Chief Designer of the OKB-52, where he continued to work on cruise missiles.

Chelomey continued his scientific research, earning a doctorate in science from Bauman Moscow Higher Technical School. After his dissertation defense in 1951, he became a professor at the School in 1952.

In 1958, OKB-52 put forward a proposal for a multi-stage Intercontinental ballistic missile. Although their UR-200 rocket design was rejected in favour of Mikhail Yangel's R-36 (NATO designation SS-9 Scarp), their UR-100 design was accepted.

Chelomey's OKB was part of the General Machine-Building Ministry headed by Sergey Afanasyev.[1] 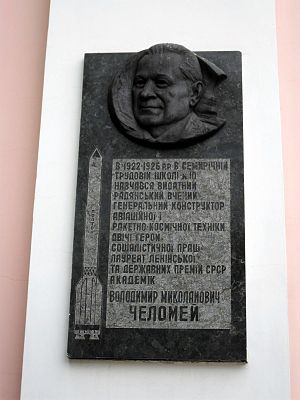 Plaque to Chelomey in Poltava, Ukraine

In 1959, Chelomey was appointed the Chief Designer of Aviation Equipment.

OKB-52, along with designing ICBMs, started to work on spacecraft, and in 1961 began work on a design for a much more powerful ICBM, the UR-500, although it was rather quickly rejected as impractical to use as a missile.

In 1962, Chelomey became an Academician of the USSR Academy of Sciences, Mechanics Department.

Chelomey became Korolyov's internal competitor in the "Moon race". Chelomey proposed that the powerful UR-500 be used to launch a small two-man craft on a lunar flyby, and managed to gain support for his proposal by employing members of Khrushchev's family. He also claimed the UR-500 could be used to launch a military space station. Korolev aggressively opposed the UR-500 due to its use of extremely toxic nitrogen tetroxide and UDMH propellants.

Following Khrushchev's removal, Chelomey's and Korolyov's projects were combined, but the Soviet Lunar program continued. The first launch of the UR-500 (also known as Proton) took place in early 1965.

Although it was never used to send cosmonauts to the Moon as Chelomey had hoped, Proton became the staple heavy lift launch vehicle of the Soviet/Russian fleet and would be used over the years for planetary probes, space stations, geosynchronous satellites, and more.

The Earth satellites such as Polyot were also designed by Chelomey's OKB. Unlike earlier such craft, even Chelomey's first satellites Polyot-1 (1963) and Polyot-2 (1964) were able to change their orbits themselves. He also headed the development of the Proton satellite. In the 1970s Chelomey's OKB proposed non-realised Proton-based 20-ton LKS (Kosmolyot) spaceplane and worked on the Almaz military orbital stations (flown as Salyut 2, Salyut 3 and Salyut 5) which also became the basis for the Salyut, Mir and Zvezda civil space stations. To support his Almaz stations, Chelomey designed the TKS, as an large alternative to Soyuz. The TKS never flew manned as planned but derivatives flew as modules on Salyut 7 and Mir. In the 1980s Chelomey's OKB proposed non-realised 15-ton Uragan spaceplane based on Zenit-2 launcher.[1] 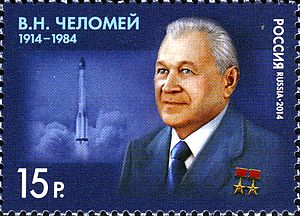