In 1949, while studying in the first year, he was arrested on charges of creating a youth underground organization and sentenced to 10 years in the camps. Released in 1954, he worked as a bricklayer. In the 1960s, he joined human rights movement in the Soviet Union, signed a number of collective letters, participated in collecting materials for Alexander Solzhenitsyn's The Gulag Archipelago. In 1969, he was re-arrested, declared insane and sent for compulsory treatment in the Orel special psychiatric hospital. He was released in 1974. 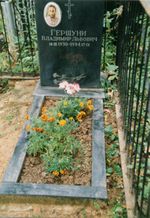 In 1978, a member of the Royal College of Psychiatrists Dr. Gerard Low-Beer visited Moscow and examined nine Soviet political dissidents, including Gershuni, and came to the conclusion that they have no signs of mental illness, which would require mandatory treatment currently or in the past.[1]

In 1976–1978, he was continuing to participate in dissident activity and was co-editor of the samizdat magazine "Quest" (1976–1978), in 1979, he was one of the founders of the Free Interprofessional Association of Workers (SMOT). Simultaneously he published humorous miniatures in the Soviet press under the pseudonym V. Lvov. In 1982, he for the third time was arrested for publishing a SMOT newsletter and placed in a specialized psychiatric hospital in Blagoveshchensk, then in Almaty. He was released in 1987.