Vladimir Kosmich Zworykin (Russian: Влади́мир Козьми́ч Зворы́кин, Vladimir Koz'mich Zvorykin; July 29 [O.S. July 17] 1888 – July 29, 1982)[1][2] was a Russian inventor, engineer, and pioneer of television technology. Educated in Russia and in France, he spent most of his life in the United States. Zworykin invented a television transmitting and receiving system employing cathode ray tubes. He played a role in the practical development of television from the early thirties, including charge storage-type tubes, infrared image tubes and the electron microscope.[3]

Vladimir Kosmich Zworykin was born in Murom, Russia, in 1888, on July 29 (old style July 17), to the family of a prosperous merchant. He had a relatively calm upbringing, and he rarely saw his father except on religious holidays. He studied at the St. Petersburg Institute of Technology, under Boris Rosing. He helped Rosing with experimental work on television in the basement of Rosing's private lab at the School of Artillery of Saint Petersburg. They worked on the problem of "electrical telescopy," something Zworykin had never heard of before. At this time, electrical telescopy (or television as it was later called) was just a dream. Zworykin did not know that others had been studying the idea since the 1880s, or that Professor Rosing had been working on it in secret since 1902 and had made excellent progress. Rosing had filed his first patent on a television system in 1907, featuring a very early cathode ray tube as a receiver, and a mechanical device as a transmitter. Its demonstration in 1911, based on an improved design, was the first world's first demonstration of TV of any kind.[4]

Zworykin graduated in 1912 and, thereafter, studied X-rays under professor Paul Langevin in Paris.[4] During World War I, Zworykin was enlisted and served in the Russian Signal Corps, then succeeded in getting a job working for Russian Marconi, testing radio equipment that was being produced for the Russian Army. Zworykin decided to leave Russia for the United States in 1918, during the Russian Civil War. He left through Siberia, travelling north on the River Ob to the Arctic Ocean as part of an expedition led by Russian scientist Innokenty P. Tolmachev, eventually arriving in the US at the end of 1918. He returned to Omsk, then capital of Admiral Kolchak's government in 1919, via Vladivostok, then to the United States again on official duties from the Omsk government. These duties ended with the collapse of the White movement in Siberia at the death of Kolchak. Zworykin then decided to remain permanently in the US. 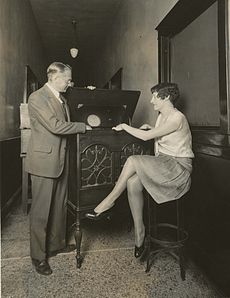 Once in the U.S., Zworykin found work at the Westinghouse laboratories in Pittsburgh, where he eventually had an opportunity to engage in television experiments. He summarized the resulting invention in two patent applications. The first, entitled "Television Systems", was filed on December 29, 1923, and was followed by a second application in 1925 of essentially the same content, but with minor changes and the addition of a Paget-type screen for color transmission and reception.[5] He was awarded a patent for the 1925 application in 1928,[5] and two patents for the 1923 application that was divided in 1931,[6][7] although the equipment described was never successfully demonstrated.[8][9][10]

Zworykin described cathode ray tubes as both transmitter and receiver. The operation, whose basic thrust was to prevent the emission of electrons between scansion cycles, was reminiscent of A. A. Campbell Swinton's proposal published in Nature in June 1908.[11][12] This would result in the television signal being derived from the modest number of electrons released at the instant the cathode ray swept over an image point.[citation needed] 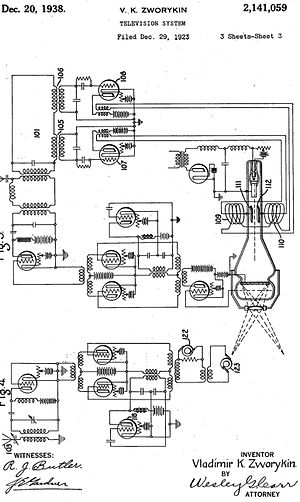 The demonstration given by Zworykin sometime in late 1925 or early 1926, was far from a success with the Westinghouse management, even though it showed the possibilities inherent in a system based on the Braun tube. Although he was told by management to "devote his time to more practical endeavours", Zworykin continued his efforts to perfect his system. As attested by his doctoral dissertation of 1926, earning him a PhD from the University of Pittsburgh, his experiments were directed at improving the output of photoelectric cells.

There were, however, limits to how far one could go along these lines, and so, in 1929, Zworykin returned to vibrating mirrors and facsimile transmission, filing patents describing these. At this time, however, he was also experimenting with an improved cathode ray receiving tube, filing a patent application for this in November 1929, and introducing the new receiver that he named the "kinescope", reading a paper two days later at a convention of the Institute of Radio Engineers.

Having developed the prototype of the receiver by December, Zworykin met David Sarnoff,[13] who eventually hired him and put him in charge of television development for RCA at their newly established laboratories in Camden, New Jersey.

The move to the laboratories occurred in the spring of 1930, and the difficult task of developing a transmitter could begin. There was an in-house evaluation in mid-1930, where the kinescope performed well (but with only 60 lines definition[14]), and the transmitter was still of a mechanical type. A "breakthrough" would come when the Zworykin team decided to develop a new type of cathode ray transmitter, one described in the French and British patents of 1928 priority by the Hungarian inventor Kalman Tihanyi whom the company had approached in July 1930, after the publication of his patents in England and France. This was a curious design, one where the scanning electron beam would strike the photoelectric cell from the same side where the optical image was cast. Even more importantly, it was a system characterized by an operation based on an entirely new principle, the principle of the accumulation and storage of charges during the entire time between two scansions by the cathode-ray beam. 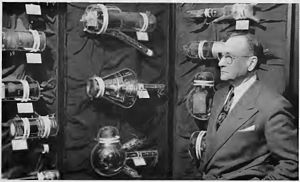 Zworykin and some of the historic camera tubes he developed

According to Albert Abramson, Zworykin's experiments started in April 1931, and after the achievement of the first promising experimental transmitters, on October 23, 1931, it was decided that the new camera tube would be named the iconoscope. The system was ready to be launched at the end of 1934; a contract had of course been signed with the Hungarian inventor for the purchase of his patents. In early 1935, the new tube was introduced in Germany. It was soon developed there, with some improvements, and was successfully used at the 1936 Berlin Olympic Games as one of several cameras, including Philo Farnsworth's Image Dissector, for film transmission only, broadcasting the games to some two-hundred public theaters. Although the tube went through a number of adjustments and improvements, it continued to be called by the generic name of iconoscope.

The developments in England, by the British firm Marconi/EMI, followed the original charge storage design under a patent exchange. This electronic system was officially adopted by the BBC, whose experimental public broadcasts began in England in November 1936 and initially included the Baird-system. The British electronic system featured 405 scanning lines, while German television adopted 441 line scanning and so did RCA following the initial (1934) 375 line definition.

Zworykin kept his own photographic record album from 1933, which can be viewed page by page on the internet.[15]

Zworykin married for a second time in 1951. His wife was Katherine Polevitzky (1888-1985), a Russian-born professor of bacteriology at the University of Pennsylvania. It was the second marriage for both. The ceremony was in Burlington, New Jersey.[16] A photographic record of his marriage and world wide tour can be viewed online.[17] He retired in 1954.

But new frontiers in medical engineering and biological engineering appealed to him, and he became a founder and first president of the International Federation for Medical and Biological Engineering. The Federation continues to honor outstanding research engineering with a Zworykin Award, the prize being travelling funds to the award's presentation at a World Congress.[18]

Vladimir Zworykin's patent diagram of an iconoscope, 1931,[21] with an apparatus similar to the camera part.[6][7]

Throughout his steady rise in rank, Zworykin remained involved in the many important developments of RCA and received several outstanding honours, including, in 1934, the Morris Liebmann Memorial Prize from the Institute of Radio Engineers.[22]

He was awarded the Howard N. Potts Medal from The Franklin Institute in 1947.[23]

In 1966, the National Academy of Sciences awarded him the National Medal of Science for his contributions to the instruments of science, engineering, and television and for his stimulation of the application of engineering to medicine.[24]

He was founder-president of the International Federation for Medical Electronics and Biological Engineering, a recipient of the Faraday Medal from Great Britain (1965), and a member of the U.S. National Hall of Fame from 1977.[24]

From 1952 to 1986, the IEEE made awards to worthy engineers in the name of Vladimir K. Zworykin. More recently the Zworykin Award has been bestowed by the International Federation for Medical and Biological Engineering.[26]

The most complete list of Zworykin's awards can be found online at historyTV.net .[27]

Zworykin was inducted into the New Jersey Inventor's Hall of Fame and the National Inventors Hall of Fame. Additionally, Tektronix in Beaverton, Oregon has named a street on its campus after Zworykin.

In 1995 Albert Abramson wrote a biography of Zworykin, considered by some[who?] to be definitive.