Vladimir Galaktionovich Korolenko (Ukrainian: Володимир Галактионович Короленко, Volodymyr Halaktyonovych Korolenko; Russian: Влади́мир Галактио́нович Короле́нко) (27 July 1853 – 25 December 1921) was a Russian and Ukrainian short story writer, journalist, human rights activist and humanitarian. His short stories were known for their harsh description of nature based on his experience of exile in Siberia. Korolenko was a strong critic of the Tsarist regime and in his final years of the Bolsheviks.

Korolenko was born in Zhitomir, Volhynian Governorate, Russian Empire in 1853, the son of a Cossack and a district judge. He was educated at secondary schools in Zhitomir and Rovno before undertaking tertiary studies at the Saint Petersburg Technological Institute in 1871 and the Moscow College of Agriculture and Forestry in 1874. Korolenko was expelled from both institutions for participating in the revolutionary activities of the Narodniks movement. During 1876 he was exiled briefly to Kronstadt.

Korolenko's first short stories were published in 1879. However, his literary career was interrupted that year when he was arrested for revolutionary activity and exiled to the Vyatka region for five years. In 1881 he refused to swear allegiance to the new Tsar Alexander III and was exiled farther, to Yakutia.

Upon his return from the exile, he had more stories published. Makar's Dream (Сон Макара, Son Makara) established his reputation as a writer when it was published in 1885. The story, based on a dying peasant's dream of heaven, was translated and published in English in 1892.

Korolenko settled in Nizhniy Novgorod shortly afterwards and continued publishing popular short stories. He published a novel Слепой музыкант (Slepoi Musykant) in 1886, which was published in English as The Blind Musician in 1896-1898.

After visiting the Chicago exhibition during 1893, Korolenko wrote the story Without Language (Без языка, Bez Yazyka) based on what happens to a Ukrainian peasant who immigrates to the USA. His final story Мгновение (Mgnovenie, "Blink of an Eye"), was published in 1900.

By then, Korolenko was well established amongst Russian writers. He was a member of the Russian Academy of Sciences but resigned in 1902 when Maxim Gorky was expelled as a member because of his revolutionary activities. (Anton Chekhov resigned from the Academy for the same reason). 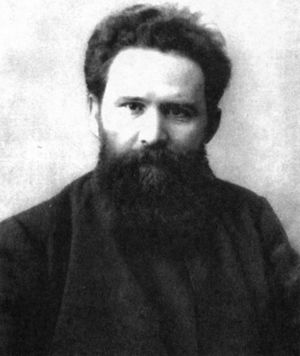 In 1895, Korolenko became the editor of the periodical Russkoe Bogatstvo (Russian Wealth) and used this position to criticise injustice occurring under the tsar. He also used his position to publish reviews of important pieces of literature such as Chekhov's final play The Cherry Orchard in 1904.

Vladimir Korolenko was a lifetime opponent of Czarism and reservedly welcomed the Russian Revolution of 1917. However, he soon opposed the Bolsheviks as their despotic nature became evident. During the Russian Civil War that ensued, he criticised both Red Terror and White Terror.

He worked on an autobiography История моего современника (Istoria moego sovremenika The History of My Contemporary.

Korolenko advocated for human rights and against injustices and persecutions on the basis of social class by his essay В Голодный год (During The Starving Year, 1891–1892), nationalism in his article Мултанское дело (The Multanskoye Affair, 1895–1896), and criticised[1] the anti-Semitic Beilis trial (in his Call to the Russian People in regard to the blood libel of the Jews, 1911–1913).

He died in Poltava in the Ukrainian Soviet Socialist Republic on 25 December 1921.

Korolenko is generally considered to be a major Russian writer of the late 19th century and early 20th century. Russian singer and literature student Pavel Lion (now Ph.D.) adopted his stage name Psoy Korolenko due to his admiration of Korolenko's work.

A minor planet 3835 Korolenko, discovered by Soviet astronomer Nikolai Stepanovich Chernykh in 1977 is named for him.[1]

The following is a list of Korolenko's most notable writings: