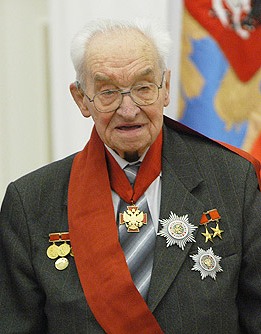 Vladimir Aleksandrovich Kotelnikov (Russian Владимир Александрович Котельников, scientific transliteration Vladimir Alexandrovič Kotelnikov, 6 September 1908 in Kazan – 11 February 2005 in Moscow) was an information theory and radar astronomy pioneer from the Soviet Union. He was elected a member of the Russian Academy of Science, in the Department of Technical Science (radio technology) in 1953. From 30 July 1973 to 25 March 1980 Kotelnikov served as Chairman of the RSFSR Supreme Soviet.

He is mostly known for having discovered, before e.g. Edmund Whittaker, Harry Nyquist, Claude Shannon), the sampling theorem in 1933. [2] This result of Fourier Analysis was known in harmonic analysis since the end of the 19th century and circulated in the 1920s and 1930s in the engineering community. He was the first to write down a precise statement of this theorem in relation to signal transmission. He also was a pioneer in the use of signal theory in modulation and communications.

He is also a creator of the theory of optimum noise immunity.[3] He obtained several scientific prizes for his work in radio astronomy and signal theory. In 1961, he oversaw one of the first efforts to probe the planet Venus with radar. In June 1962 he led the first probe of the planet Mercury with radar.[4][5][6]

Kotelnikov was also involved in cryptography, proving the absolute security of the one-time pad; his results were delivered in 1941, the time of Nazi Germany's invasion of the Soviet Union, in a report that apparently remains classified.[7] In this, as with the above-mentioned sampling theorem, he and Claude Shannon in the US reached the same conclusions independently of each other. For his achievements Kotelnikov was awarded the IEEE 2000 Gold Medal of Alexander Graham Bell and the honorable IEEE Third Millennium Medal. Prof. Bruce Eisenstein, the President of the IEEE, described Kotelnikov as follows: "The outstanding hero of the present. His merits are recognized all over the world. In front of us is the giant of radio engineering thought, who has made the most significant contribution to media communication development".[citation needed]