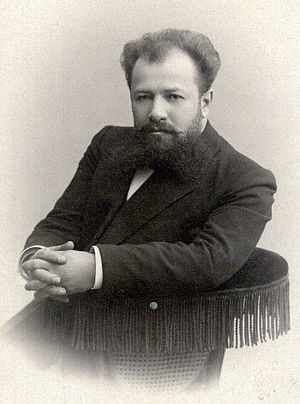 Vladimir Ivanovich Nemirovich-Danchenko was born into a mixed Ukrainian-Armenian family in Ozurgeti (Georgia) near Poti. His father was an officer of the Russian army, and his mother, Alexandra Yagubyan (1829–1914), was an Armenian. He was educated at High school in Tbilisi and then at Moscow State University (physical-mathematical and juridical departments 1876–1879). In 1879 he left the University for the theatre, starting as a theatre critic, and in 1881, his first play "Dog-rose", which was staged in one year by Maly Theatre, was published. He was a teacher of Moskvin, Knipper and Meyerhold.[1] In 1919 he established the Musical Theatre of the Moscow Art Theatre, which was reformed into the Nemirovich-Danchenko Musical Theatre in 1926.[1] In 1943 Nemirovich-Danchenko established the Moscow Art Theatre School, which is still extant.[citation needed]

Nemirovich-Danchenko opened for theatre a true sense of Chekhov and Gorky plays, a prose of Dostoevsky and Tolstoy. It has been said[according to whom?][citation needed] that "If Stanislavsky was the soul of Art Theatre, then Nemirovich was its heart".

Nemirovich-Danchenko created an "acting" and "directing" style of the Moscow Art Theatre, "actors ensemble" and "atmosphere". Because of this the Moscow Art Theatre was considered the best theatre of the world at that time.[according to whom?] But Nemirovich didn't write down his "system" of acting and we know only the "system of Stanislavsky" (or "Stanislavsky's system"). He was one of the first recipients of the title of People's Artist of the USSR in 1936. Later, he was awarded the USSR State Prize (1942, 1943), the Order of Lenin,[when?] and Order of the Red Banner of Labour.[when?]