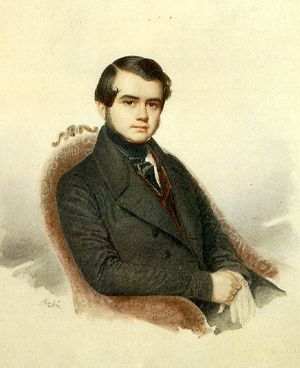 His paternal grandfather was a Polish aristocrat, and he grew up in the midst of St. Petersburg high society.[1] He graduated from the University of Dorpat in 1834 and was attached to the Ministry of Internal Affairs the following year in Vienna.[2] His literary career began in 1837 in the journal Sovremennik. In 1840 he married Sofya Mikhailovna Velgorskaya. In 1843 he visited Nice and met Gogol. From 1856 he was an Officer for Special Commissions in the imperial court; he took an interest in prison reform, and from 1875 was сhair of the Commission for the Reorganization of Prisons in Russia. In 1858 he was sent abroad to study European theater, and in 1877 he became an official historian at court.

Sollogub was a connoisseur of theatrical life and of St. Petersburg society. He hosted a well-known literary and musical salon where he brought to life the atmosphere of St. Petersburg of that era as related in his Memoirs (1887). He is best known for his 1845 novelette Tarantas ("The Tarantass"), "a satirical journey from Moscow to Kazán in a tumble-down traveling cart. The satire, superficial and uninspired, is directed against the ideas of the Slavophils and the unpractical dreaminess of the romantic idealists."[3]