From Infogalactic: the planetary knowledge core
Jump to: navigation, search
This article is about the Russian philosopher. For others with the same name, see Vladimir Solovyov.

Vladimir Sergeyevich Solovyov[1] (Russian: Влади́мир Серге́евич Соловьёв; January 28 [O.S. January 16] 1853 – August 13 [O.S. July 31] 1900) was a Russian philosopher, theologian, poet, pamphleteer and literary critic, who played a significant role in the development of Russian philosophy and poetry at the end of the 19th century and in the spiritual renaissance of the early 20th century.

Vladimir Sergeyevich Solovyov, the son of the historian Sergey Mikhaylovich Solovyov (1820–1879), was born in Moscow on 28 January 1853.[2] His mother, Polyxena Vladimirovna, belonged to a Polish origin family, having among her ancestors the thinker Gregory Skovoroda (1722–1794).[3]

In his teens Solovyov renounced Eastern Orthodoxy for nihilism, but later[when?] his disapproval of Positivism[4] saw him begin to express views in line with those of the Orthodox Church.[4]

In his The Crisis of Western Philosophy: Against the Positivists, Solovyov discredited the Positivists' rejection of Aristotle's essentialism or philosophical realism. In Against the Postivists he took the position of intuitive noetic comprehension, noesis or insight; he saw consciousness as integral (see the Russian term sobornost) and requiring both phenomenon (validated by dianonia) and noumenon validated intuitively.[4] Positivism, according to Solovyov, only validates the phenomenon of an object, denying the intuitive reality which people experience as part of their consciousness.[4]

Solovyov never married or had children, but he pursued idealized relationships as immortalized in his spiritual love-poetry, including with two women named Sophia.[7] He rebuffed the advances of mystic Anna Schmidt, who claimed to be his divine partner.[8] 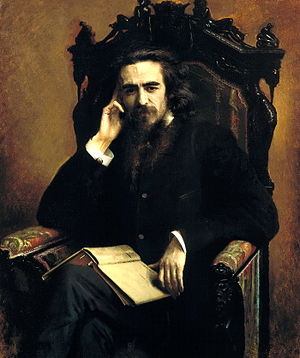 It is widely held that Solovyov was one of the sources for Dostoyevsky's characters Alyosha Karamazov and Ivan Karamazov from The Brothers Karamazov.[9] Solovyov's influence can also be seen in the writings of the Symbolist and Neo-Idealist writers of the later Russian Soviet era. His book The Meaning of Love can be seen as one of the philosophical sources of Leo Tolstoy's The Kreutzer Sonata (1889). This was also the work where he introduced the concept of 'syzygy', to denote 'close union'.[10]

He influenced the religious philosophy of Nicolas Berdyaev, Sergey Bulgakov, Pavel Florensky, Nikolai Lossky, Semyon Frank, brothers Sergei Nikolaevich Trubetskoy, and Evgenii Nikolaevich Trubetskoy, the ideas of Rudolf Steiner and the poetry and theory of Russian Symbolists, namely Andrei Belyi, Alexander Blok, Solovyov's nephew, and others. Hans Urs von Balthasar explores his work as one example of seven lay styles that reveal the glory of God's revelation, in volume III of The Glory of the Lord (pp. 279–352).

Solovyov compiled a philosophy based on Hellenistic philosophy (see Plato, Aristotle and Plotinus) and early Christian tradition with Buddhism and Hebrew Kabbalistic elements (Philo of Alexandria). He also studied Gnosticism and the works of Valentinus.[11] His religious philosophy was syncretic, and fused philosophical elements of various religious traditions with Orthodox Christianity and his own experience of Sophia.

Solovyov described his encounters with the entity Sophia in his works, Three Encounters and Lectures on Godmanhood among others. Solovyov's fusion was driven by the desire to reconcile and or unite with Orthodox Christianity these various traditions via the Russian Slavophiles' concept of sobornost. His Russian religious philosophy had a very strong impact on the Russian Symbolist art movements of his time.[12] Solovyov's teachings on Sophia, conceived as the merciful unifying feminine wisdom of God comparable to the Hebrew Shekinah or various goddess traditions,[13] have been deemed a heresy by ROCOR and as unsound and unorthodox by the Patriarchate of Moscow.[14] 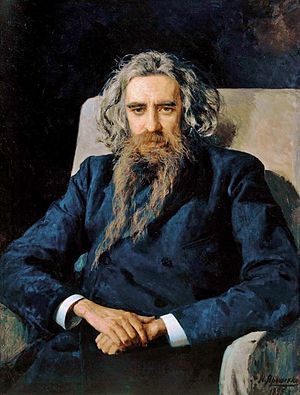 Solovyov sought to create a philosophy that could through his system of logic or reason reconcile all bodies of knowledge or disciplines of thought, and fuse all conflicting concepts into a single system. The central component of this complete philosophic reconciliation was the Russian Slavophile concept of sobornost (organic or Spontaneous order through integration; which is related to the Russian word for 'catholic'). Solovyov sought to find and validate common ground – or where conflicts found common ground – and by focusing on this common ground to establish absolute unity and or integral[15] fusion of opposing ideas and / or peoples.[16]

"As long as the dark foundation of our nature, grim in its all-encompassing egoism, mad in its drive to make that egoism into reality, to devour everything and to define everything by itself, as long as that foundation is visible, as long as this truly original sin exists within us, we have no business here and there is no logical answer to our existence. Imagine a group of people who are all blind, deaf and slightly demented and suddenly someone in the crowd asks, "What are we to do?"... The only possible answer is "Look for a cure". Until you are cured, there is nothing you can do. And since you don't believe you are sick, there can be no cure."

"But if the faith communicated by the Church to Christian humanity is a living faith, and if the grace of the sacraments is an effectual grace, the resultant union of the divine and the human cannot be limited to the special domain of religion, but must extend to all Man's common relationships and must regenerate and transform his social and political life."[17]