From Infogalactic: the planetary knowledge core
Jump to: navigation, search
This article is about the Russian ballet dancer. For other persons of the same name, see Vladimir Vasiliev (disambiguation). 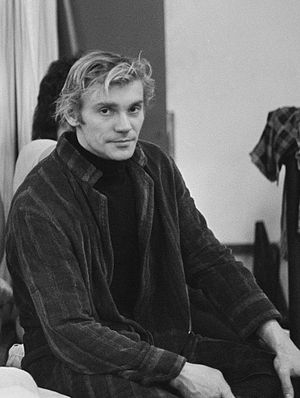 Vladimir Viktorovich Vasiliev (Владимир Викторович Васильев; born 18 April 1940 in Moscow, Soviet Union), a Russian ballet dancer, was principal dancer with the Bolshoi Ballet,[1][2][3] and was best known for his role of Spartacus and his powerful leaps and turns.

Born in Moscow in 1940, the son of a truck driver, Vasiliev graduated from the Moscow Ballet School in 1958 (his teachers included Aleksey Yermolayev) and joined the Bolshoi Ballet. He became a premier dancer who made enormous contributions to the development of classical male dance; he came to embody the strong new Bolshoi male.[1][2]

He was the first dancer to be given the award la médaille d’or du meilleur danseur du Monde (“The Gold Medal of the World’s Best Dancer”); subsequently Mikhail Baryshnikov and Patrick Dupond were also awarded the distinction. Russia’s influential ballet critic and choreographer Fyodor Lopukhov called him “God of the dance … A miracle in art, perfection”.[citation needed]

Numerous roles were created for him, and he performed throughout the world, usually partnering his wife, Bolshoi prima ballerina Ekaterina Maximova. Among the most notable were those created by Yuri Grigorovich, who gave him the principal roles in his original productions of The Stone Flower, Spartacus, The Nutcracker, the ballet version of Ivan the Terrible, Valery Gavrilin's Anyuta (1982), and Yakov Eshpay's Angara (1976). Besides Maximova, Vasiliev’s famous partners included: Galina Ulanova, Maya Plisetskaya, Alicia Alonso, Carla Fracci, Rita Poelvoorde and Ambra Vallo.[1][2]

Yet Vladimir Vasiliev is not as well known in the west as such dancers as Rudolf Nureyev and Mikhail Baryshnikov, because he remained in the Soviet Union and did most of his work there. Nonetheless, he and Maximova gleaned wide exposure for their appearances in Franco Zeffirelli's filmed version of Giuseppe Verdi's opera La traviata (1983). Both performed in Spanish costume (Vasiliev as a matador) in the divertissements composed for the equivalent of Act II, scene 2.

New York Times dance critic Anna Kisselgoff described the excitement of one of Vasiliev’s U.S. performances with the Bolshoi Ballet: “Yekaterina Maksimova and Vladimir Vasiliev burst upon New York City in 1959, the greatest of the passionate young dancers who, with Moscow's more established stars, made the Bolshoi Ballet's American debut a total triumph.”[4]

Since his exit from the Bolshoi, Vasiliev premiered in the ballet production Lungo Viaggio Nella Notte di Natale, set to Tchaikovsky’s music, in Opera di Roma, and continues to choreograph and stage new ballets.

Over the years Vasiliev has received many of the most prestigious Soviet, Russian and foreign prizes, orders and highest awards including the USSR State Prize, Russian State Prize, Order "For Merit to the Fatherland"[5][6] and State Order “For Merits” of France, Lithuanian State Order, Order of Rio Branco (Brazil), UNESCO Pablo Picasso Medal and others.