Vladimir Ivanovich Vernadsky (Russian: Влади́мир Ива́нович Верна́дский; Ukrainian: Володи́мир Іва́нович Верна́дський; 12 March [O.S. 28 February] 1863 – 6 January 1945) was a Russian, Ukrainian,[1][2][3] and Soviet mineralogist and geochemist who is considered one of the founders of geochemistry, biogeochemistry, and of radiogeology, founder of the Ukrainian Academy of Sciences (now National Academy of Sciences of Ukraine).[4] His ideas of noosphere were an important contribution to Russian cosmism[citation needed]. He is most noted for his 1926 book The Biosphere in which he inadvertently worked to popularize Eduard Suess’ 1885 term biosphere, by hypothesizing that life is the geological force that shapes the earth. In 1943 he was awarded the Stalin Prize. 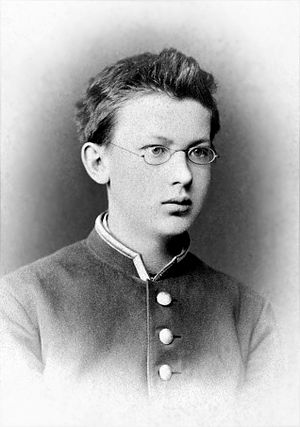 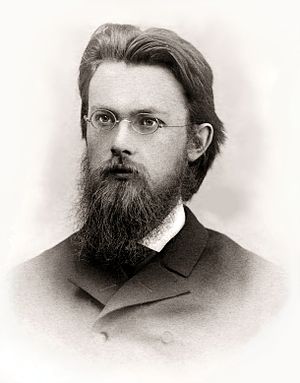 Vernadsky was born in Saint Petersburg, Russian Empire, on 12 March [O.S. 28 February] 1863 in family of the native Kiev residents Russian-Ukrainian economist Ivan Vernadsky and music instructor Hanna Konstantynovych. According to family legend, his father was a descendent of Zaporozhian Cossacks.[5] He had been a professor of political economy in Kiev before moving to Saint Petersburg. His mother was a Russian noblewoman of Ukrainian Cossack descent.[6] Vernadsky graduated from Saint Petersburg State University in 1885. As the position of mineralogist in Saint Petersburg State University was vacant, and Vasily Dokuchaev, a soil scientist, and Alexey Pavlov, a geologist, had been teaching Mineralogy for a while, Vernadsky chose to enter Mineralogy. He wrote to his wife Natasha on 20 June 1888 from Switzerland:

...to collect facts for their own sake, as many now gather facts, without a program, without a question to answer or a purpose, is not interesting. However, there is a task which someday those chemical reactions which took place at various points on earth; these reactions take place according to laws which are known to us, but which, we are allowed to think, are closely tied to general changes which the earth has undergone by the earth with the general laws of celestial mechanics. I believe there is hidden here still more to discover when one considers the complexity of chemical elements and the regularity of their occurrence in groups...

While trying to find a topic for his doctorate, he first went to Naples to study under crystallographer Arcangelo Scacchi, who was senile by that time. Scacchi's condition led Vernadsky to go to Germany to study under Paul Groth. Vernadsky learned to use Groth's modern equipment, who had developed a machine to study the optical, thermal, elastic, magnetic and electrical properties of crystals. He also gained access to the physics lab of Leonhard Sohncke (Direktor, Physikalisches Institut der Universität Jena, 1883–1886; Professor der Physik an der Technischen Hochschule München 1886 -1897), who was studying crystallisation during that period.

Vernadsky participated in the First General Congress of the zemstvos, held in Petersburg on the eve of the 1905 revolution to discuss how best to pressure the government to the needs of the Russian society; became a member of the liberal Constitutional Democratic Party (KD); and served in parliament, resigning to protest the Tsar's proroguing of the Duma. He served as professor and later as vice rector of Moscow University, from which he also resigned in 1911 in protest over the government's reactionary policies. After the February revolution of 1917, he served on several commissions of agriculture and education of the provisional government, including as assistant minister of education.[7]

Vernadsky first popularized the concept of the noosphere and deepened the idea of the biosphere to the meaning largely recognized by today's scientific community. The word 'biosphere' was invented by Austrian geologist Eduard Suess, whom Vernadsky met in 1911.

In Vernadsky's theory of the Earth's development, the noosphere is the third stage in the earth's development, after the geosphere (inanimate matter) and the biosphere (biological life). Just as the emergence of life fundamentally transformed the geosphere, the emergence of human cognition will fundamentally transform the biosphere. In this theory, the principles of both life and cognition are essential features of the Earth's evolution, and must have been implicit in the earth all along. This systemic and geological analysis of living systems complements Charles Darwin's theory of natural selection,[citation needed] which looks at each individual species, rather than at its relationship to a subsuming principle.

Vernadsky's visionary pronouncements were not widely accepted in the West. However, he was one of the first scientists to recognize that the oxygen, nitrogen and carbon dioxide in the Earth's atmosphere result from biological processes. During the 1920s he published works arguing that living organisms could reshape the planets as surely as any physical force. Vernadsky was an important pioneer of the scientific bases for the environmental sciences.[8]

Vernadsky was a member of the Russian and Soviet Academies of Sciences since 1912 and was a founder and first president of the Ukrainian Academy of Sciences in Kiev, Ukraine (1918). He was a founder of the National Library of Ukrainian State and worked closely with the Tavrida University in Crimea. During the Russian Civil War, he hosted gatherings of the young intellectuals who later founded the émigré Eurasianism movement.[9]

In the late 1930s and early 1940s Vernadsky played an early advisory role in the Soviet atomic bomb project, as one of the most forceful voices arguing for the exploitation of nuclear power, the surveying of Soviet uranium sources, and having nuclear fission research conducted at his Radium Institute. He died, however, before a full project was pursued.

On religious views, Vernadsky was an atheist.[10] He was interested in Hinduism and Rig Veda[11][12]

Vernadsky's son George Vernadsky (1887–1973) emigrated to the United States where he published numerous books on medieval and modern Russian history.

An avenue in Moscow, the National Library of Ukraine and the Tavrida National University in Crimea, are named in honor of Vladimir Vernadsky.