The Voice of Russia (Russian: Голос России, tr. Golos Rossii) was the Russian government's international radio broadcasting service from 1993 until 9 November 2014. Its interval signal was a chime version of "Majestic" chorus from the "Great Gate of Kiev" portion of Pictures at an Exhibition by Mussorgsky.

On 22 December 1993, Russian President Boris Yeltsin issued a decree which reorganized Radio Moscow with a new name: The Voice of Russia.[1]

A popular feature of Voice of Russia was Moscow Mailbag, which answered listeners' questions in English about Russia. Until 2005, the programme was presented by Joe Adamov, who was known for his command of the English language and his good humour.

On 9 December 2013, Russian President Vladimir Putin issued a presidential decree liquidating Voice of Russia as an agency and merging it with RIA Novosti to form the Rossiya Segodnya international news agency.[2]

Several reports published in 2013 claimed that Voice of Russia was to cease its shortwave service as of January 1, 2014 due to budget cuts, however service continued into the new year.[3] Margarita Simonyan, editor in chief of the Rossiya Segodnya, said in March 2014 that "We will stop using obsolete radio broadcasting models, when the signal is transmitted without any control and when it is impossible to calculate who listens to it and where."[4] Voice of Russia ceased shortwave and European mediumwave broadcasting effective 1 April 2014.[5] The service had continued to be available worldwide via the internet, in selected regions on satellite, and in several cities on FM, AM (in North America) or local digital radio.

On November 10, 2014, the Voice of Russia was replaced by Radio Sputnik, part of the Sputnik News multimedia platform operated by Rossiya Segodnya.[6] 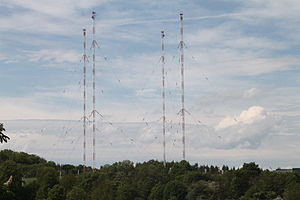 Antenna of "Voice of Russia" in Wachenbrunn, Germany

Voice of Russia had broadcast in short, medium and longwave formats, in DAB+, DRM, HD-Radio, as well as through cable, satellite transmission and in mobile networks. VOR’s Internet coverage came in as many as 38 languages.