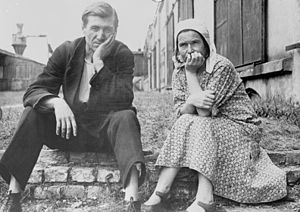 Ethnic Germans from the Volga region at a refugee camp in Schneidemühl, Germany, in 1920

The Volga Germans (German: Wolgadeutsche or Russlanddeutsche, Russian: Поволжские немцы, Povolzhskie nemtsy) are ethnic Germans who historically lived along the River Volga in the region of southeastern European Russia around Saratov and to the south. Recruited as immigrants to Russia in the 18th century, they were allowed to maintain their German culture, language, traditions, and churches (Lutheran, Reformed, Catholics, and Mennonites). In the 19th and early 20th centuries, many Volga Germans immigrated to the Dakotas and other states in the western United States, as well as to Canada and South America (mainly Argentina and Brazil). 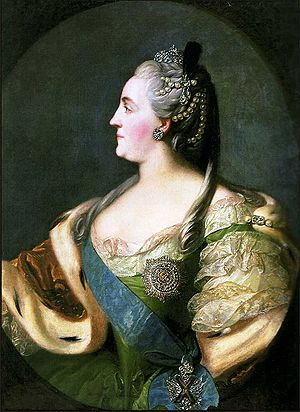 In 1762, Catherine II, born a German princess and a native of Stettin, Pomerania, deposed her husband Peter III, born German prince in Kiel, and took the Russian imperial throne. Catherine the Great published manifestos in 1762 and 1763 inviting Europeans (except Jews)[3] to immigrate and farm Russian lands while maintaining their language and culture. Although the first received little response, the second improved the benefits offered and was more successful in attracting colonists. People in other countries such as France and England were more inclined to migrate to the colonies in the Americas than to the Russian frontier. Other countries, such as Austria, forbade emigration. The settlers came mainly from Bavaria, Baden, Hesse, the Palatinate, and the Rhineland, over the years 1763 to 1767.

The early German settlements were attacked during the Pugachev uprising, which was centred on the Volga area, but they survived the rebellion. According to Darrel P. Kaiser, "Kazakh-Kirghiz tribesmen kidnapped 1573 settlers from colonies in 1774 alone and only half were successfully ransomed. The rest were killed or enslaved."[4]

Those who went to Russia had special rights under the terms of the manifesto. Some, such as being exempt from military service, were revoked in the latter part of the 19th century when the government needed more conscripts for the Russian army. The German Mennonite communities were opposed to military service because of their pacifist beliefs, so many Mennonites emigrated to the Americas instead. 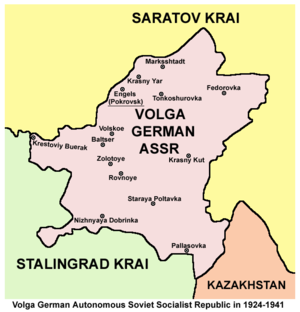 Following the Russian Revolution, the Volga German Autonomous Soviet Socialist Republic (Autonome Sozialistische Sowjet-Republik der Wolga-Deutschen in German; АССР Немцев Поволжья in Russian) was established in 1924, and it lasted until 1941. Its capital was Engels, known as Pokrovsk (Kosakenstadt in German) before 1931.

Of all the ethnic German communities in the Soviet Union, the Volga Germans represented the single largest group expelled from their historical homeland. Shortly after the German invasion, on June 22, 1941, Stalin sent Beria and Molotov to the Volga German Autonomous Soviet Socialist Republic to determine a course of action for its German inhabitants. On return, they recommended the deportation of the entire German population. Consequently, the Central Committee of the Communist Party issued a resolution on August 12, calling for the expulsion of the entire German population. With this authority, Beria on August 27 issued an order entitled "On Measures for Conducting the Operation of Resettling the Germans from the Volga German Republic, Saratov, and Stalingrad Oblasts," assigning the deputy head of the NKVD, (secret police) Ivan Serov, to command this operation. He also allocated NKVD and Red Army troops to carry out the transfer. The Germans were to be sent to various oblasts (provinces) in Siberia and Kazakhstan, beginning on September 3, and ending on September 20, 1941. On September 7, 1941, the Volga German Autonomous Soviet Socialist Republic was officially abolished, clearly showing that the Soviets considered the expulsion of the Germans final.

On August 28, 1941, the Presidium of the Supreme Soviet of the USSR approved and published a decree, which was the only official decree ever published by the Soviet Union concerning the deportation and exile of the German Russian community.The Soviet regime stated that the evacuation was a preventive measure—so that the German population would not be misled into collaborating with the German Army—rather than a punitive measure. Stalin gave the following "secret" order to the NKVD, which came to light in Latvia on September 20, 1941:

"After the house search, tell everyone who is scheduled to be deported that,
according to the government’s decision, they are being sent to other regions of the USSR.
Transport the entire family in one car until the train station, but at the station,
heads of families [read: men] must be loaded into a separate train car prepared
especially for them....Their families are deported for special settlements in the
far away regions of the Union. [Family members] must not know about the forthcoming
separation from the head of the family."

This above document may be a fabrication, as Latvia was under German occupation at that time. Nevertheless, the instructions were followed by the NKVD troops who directed the deportation.

The reason for separating the men is that they were all destined for the forced labor camps, Trudarmii (labor army). The German exiles coined this phrase, whereas Soviet documents only referred to "labor obligations" or "labor regulations." Men between the ages of 15 and 55 and, later, women between the ages of 16 and 45 were forced to do labor in the forests and mines of Siberia and Central Asia under conditions similar to that prevalent in the Gulag slave labor camps.

The expulsion of the Volga Germans finished on schedule at the end of September 1941. The number sent to Siberia and Kazakhstan totaled approximately 438,000. Together with 27,000 expelled in the same ethnic cleansing action from the Stalingrad Oblast and 47,000 from the Saratov Oblast, the total number sent to forced internal exile was about 512,000. It should be noted that the source of these figures is from the Soviet Union. It took 151 train convoys to accomplish the transfer of the Volga German population, an astounding figure when one considers that the Soviet Union was heavily engaged fighting the advancing German army, and all railway stock was required to bring soldiers to the front. This operation also involved 1,550 NKVD and 3,250 police agents assisted by 12,150 soldiers of the Red Army.[5]

In 1941 after the Nazi invasion, the NKVD (via Prikaz 35105) banned ethnic Germans from serving in the Soviet military. They sent tens of thousands of these soldiers to the Trudarmii.[6]

In 1942, nearly all the able-bodied German population was conscripted to the NKVD labor columns. About one-third did not survive the camps.[7] 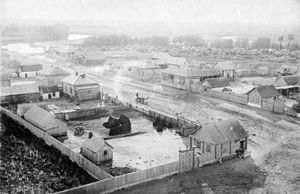 The Volga Germans never returned to the Volga region in their old numbers. They were not allowed to settle in the area for decades.[citation needed]. After the war, many remained in the Ural Mountains, Siberia, Kazakhstan (1.4% of today's Kazakh population are recognized as Germans - around 200,000), Kyrgyzstan, and Uzbekistan (about 16,000 = 0.064%).[8] After the initial period of persecution, they recovered in their new locations, where their numbers increased, and they continued to preserve their distinct cultural identity. Decades after the war, some talked about resettling where the German Autonomous Republic used to be. They met opposition from the population that had been resettled in the territory and did not persevere.

A proposal in June 1979 called for a new German Autonomous Republic within Kazakhstan, with a capital in Ermentau. The proposal was aimed at addressing the living conditions of the displaced Volga Germans. At the time, around 936,000 ethnic Germans were living in Kazakhstan, as the republic's third-largest ethnic group. On June 16, 1979, demonstrators in Tselinograd (Astana) protested this proposal. Fearing a negative reaction among the majority Kazakhs and calls for autonomy among local Uyghurs, the ruling Communist Party scrapped the proposal for ethnic German autonomy within Kazakhstan.

Since the late 1980s and the fall of the Soviet Union, some ethnic Germans have returned in small numbers to Engels, but many more emigrated permanently to Germany. They took advantage of the German law of return, a policy which grants citizenship to all those who can prove to be a refugee or expellee of German ethnic origin or as the spouse or descendant of such a person. (Greece had a similar law for the ethnic Greek minority from the former Soviet Union). This exodus occurred, although some Volga Germans speak little or no German.[citation needed]

By the late 1990s, however, Germany made it more difficult for Russians of German descent to settle in Germany,[citation needed] especially for those who do not speak some of the Volga dialects of German. A number of German families who originally migrated to Germany from former Soviet territories have since moved on to places such as Steinbach, Manitoba, fewer than 100 km from Winnipeg, where the world's largest population of ethnic German Mennonites can be found.[citation needed]

Today, about 600,000 ethnic Germans are in Russia (Russian Census (2002)), a number that increases to 1.5 million when including people of part German ancestry. 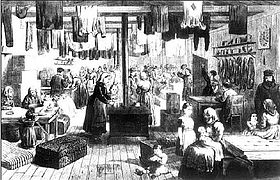 Germans from Russia were the most traditional of German-speaking arrivals. They were Germans who had lived for generations throughout the Russian Empire, but especially along the Volga River in Russia. Their ancestors had come from all over the German-speaking world, invited by Catherine the Great in 1762 and 1763 to settle and introduce more advanced German agriculture methods to rural Russia. They had been promised by the manifesto of their settlement the ability to practice their respective Christian denominations, retain their culture and language, and retain immunity from conscription for them and their descendants. As time passed, the Russian monarchy gradually eroded the ethnic German population's relative autonomy. Conscription eventually was reinstated; this was especially harmful to the Mennonites, who practice pacifism. Throughout the 19th century, pressure increased from the Russian government to culturally assimilate. Many Germans from Russia found it necessary to emigrate to avoid conscription and preserve their culture. About 100,000 immigrated by 1900, settling primarily in the Dakotas, Kansas, and Nebraska. The south-central part of North Dakota was known as "the German-Russian triangle". A smaller number moved farther west, finding employment as ranchers and cowboys.

The largest groups settled mainly in the area of the Great Plains: Alberta, Manitoba, and Saskatchewan in Canada; and North Dakota, Nebraska, Kansas, and nearby areas in the US. Outside that area, they also settled in Iowa, Michigan, Minnesota, Oregon, Washington, Wisconsin, and Fresno County in California's Central Valley. They often succeeded in dryland farming, which they had practiced in Russia. Many of the immigrants who arrived between 1870 and 1912 spent a period doing farm labor, especially in northeastern Colorado and in Montana along the lower Yellowstone River in sugar beet fields. Colonies kept in touch with each other through newspapers, especially Der Staats Anzeiger, based in North Dakota. 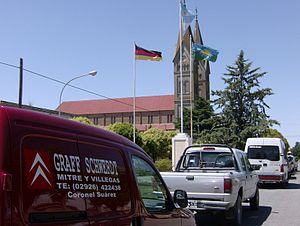 Germans from Russia also settled in Argentina (see Crespo and Coronel Suárez among others, also German Argentine), Paraguay, and Brazil (see German-Brazilians). Most Volga Germans who settled in Latin America were Catholic. Many Catholic Volga Germans chose South America as their new homeland because the nations shared their religion. 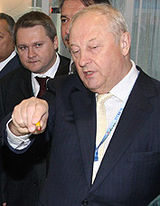 The greatest number of Volga Germans emigrated from Hesse and the Palatinate, and spoke Hessian and Palatine Rhine Franconian dialects[9][10] to which the colonists from other regions, and even from other countries like Sweden, assimilated.[11] Volga German is very similar to Pennsylvania German language, another Palatine Rhine Franconian language; in either dialect, one could say:[9]

Volga Germans borrowed some Russian words, like Erbus "watermelon" from Russian арбуз "watermelon",[13] which they carried with them on their subsequent moves to places like America[10] and Argentina.[14] 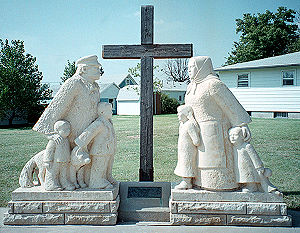