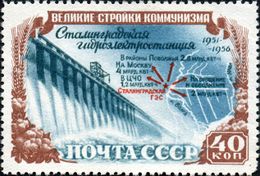 In the Soviet Union, large hydropower plants were among the Great Construction Projects of Communism. Stalingrad/Volgograd Hydroelectric Station was one of them.

The Volga Hydroelectric Station or Volga GES (Russian: Волжская ГЭС) also known as the 22nd Congress of the CPSU Stalingrad/Volgograd Hydroelectric Power Station (Russian: Сталинградская/Волгоградская ГЭС имени XXII съезда КПСС), is the largest hydroelectric station in Europe and is the last of the Volga-Kama Cascade of dams, before the Volga River flows into the Caspian Sea. Today, it is operated by the electricity company RusHydro.

Built as part of a massive post-war industrialization effort known as the Great Construction Projects of Communism, it was authorized by Joseph Stalin signing the Council of Ministers of the USSR order #3555 on 6 August 1950. The plan called for building a station north of the city of Stalingrad (modern Volgograd) with a minimum storage capacity of 1.7 million KWh.

Ten thousand youths from the Komsomol league participated in the construction, and the city of Volzhsky was formed on the left bank of the river to provide housing. Machinery was sent from all corners of the country; Moscow, Tashkent, Chelyabinsk and Kharkov, and forestry from Karelia. New electric equipment came from Zaporozhye and Sverdlovsk. The turbines and generators were built in Leningrad. In total more than 1,500 individual plants and dozens of research institutes sent equipment and specialists.

The first powerhouse came online on 22 December 1958, and the plant was declared complete on 10 September 1961. Technologically the station broke much new ground. In 1959 a new Moscow-Stalingrad 500 kV high voltage line power came into operation. Several years later, for the first time in the world, an experimental 800 kV DC line, Donbas to Volgograd, was successfully tested and later became operational. During the 1960s and 1970s several new electrotechnical and hydromechanical machinery was tested for future Siberian and foreign stations.

Today the station is the largest in Europe. It consists of a 725-metre long, 44-metre high concrete dam that crosses the Volga river. Supporting it is a 3250-metre long landfilled dam with a maximum height of 47 metres. The Station also offers railway and road crossings of the Volga.

The present power rating of the station is 2,592.5 MW and annual energy output of 12.3 billion KW-hours. There are a total of 22 generators. 15 generators produce 115 MW each (four of which have recently received repairs and overhauls), three produce 125.5 MW each and four produce 120 MW. Three fishery paths drive additional 11 MW units each, but at present two are not functioning. Thus the initial output is slightly downrated.

The 4.9 kilometre dam forms the Volgograd reservoir. At present the station is managed by OAO Volzhskaya GES that is owned by OAO GidroOGK, a daughter company of the state organisation RAO AES Rossii.

The new plant played a decisive role in the development of the Lower Volga region and the Donbas, as well as uniting the large energetic system of the Central, Volga, and Southern economic regions. The new dam also allowed for the Volga to become navigable, allowing for a path from Saratov to Astrakhan and the Caspian. In addition, there were projects for the irrigation of the excessive adjacent dry region of the left bank Volga south of it, particularly the West Kazakhstan Province.

The power generated by the station is used primarily for the city of Volgograd (220 kV) and for Moscow (500 kV) and for Donbas via the only long distance HVDC-line in Russia, the HVDC Volgograd-Donbass.

One of the most negative results that the dam caused was that it disrupted the traditional path of Caspian fish migration to their breeding grounds. The most affected became the beluga, crucial to the Black Caviar industry. The fishery canal turned out to be inefficient, and from 1962 to 1967 the annual rate was 15% of the pre-dam. The other major effect of the dam is that it formed one of the largest reservoirs, which amounts for a behemoth volume 31.5 cubic kilometres of water and stretches 540 km long, and up to 17 wide with a massive 3,117 square kilometre surface area. As a result, numerous settlements and fertile lands were lost.