listen)) is the longest river in Europe; it is also Europe's largest river in terms of discharge and watershed. It flows through central Russia and into the Caspian Sea, and is widely viewed as the national river of Russia.

Eleven of the twenty largest cities of Russia, including the capital, Moscow, are in the Volga's watershed (drainage basin).

Some of the largest reservoirs in the world can be found along the Volga. The river has a symbolic meaning in Russian culture and is often referred to as Волга-матушка Volga-Matushka (Mother Volga) in Russian literature and folklore. 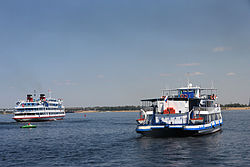 Cruise ships on the Volga.

The Turkic peoples living along the river formerly referred to it as Itil or Atil "big river". In modern Turkic languages, the Volga is known as İdel (Идел) in Tatar, Атăл (Atăl) in Chuvash, Idhel in Bashkir, Edil in Kazakh, and İdil in Turkish. The Turkic peoples associated the Itil's origin with the Kama. Thus, a left tributary to the Kama was named the Aq Itil "White Itil" which unites with the Kara Itil "Black Itil" at the modern city of Ufa. The name Indyl (Indɨl) is used in Adyge (Cherkess) language.

Among Asians the river was known by its other Turkic name Sarı-su "yellow water", but the Oirats also used their own name: Ijil mörön "adaptation river". Presently the Mari, another Uralic group, call the river Юл (Jul), meaning "way" in Tatar. Formerly, they called the river Volgydo, a borrowing from Old Russian.

The Volga is the longest river in Europe. It belongs to the closed basin of the Caspian Sea, being the longest river to flow into a closed basin. Rising in the Valdai Hills 225 meters (738 ft) above sea level northwest of Moscow and about 320 kilometers (200 mi) southeast of Saint Petersburg, the Volga heads east past Lake Sterzh, Tver, Dubna, Rybinsk, Yaroslavl, Nizhny Novgorod, and Kazan. From there it turns south, flows past Ulyanovsk, Tolyatti, Samara, Saratov and Volgograd, and discharges into the Caspian Sea below Astrakhan at 28 meters (92 ft) below sea level. At its most strategic point, it bends toward the Don ("the big bend"). Volgograd, formerly Stalingrad, is located there.

The Volga has many tributaries, most importantly the rivers Kama, the Oka, the Vetluga, and the Sura. The Volga and its tributaries form the Volga river system, which flows through an area of about 1,350,000 square kilometres (521,238 square miles) in the most heavily populated part of Russia. The Volga Delta has a length of about 160 kilometres (99 miles) and includes as many as 500 channels and smaller rivers. The largest estuary in Europe, it is the only place in Russia where pelicans, flamingos, and lotuses may be found. The Volga freezes for most of its length for three months each year.

The Volga drains most of Western Russia. Its many large reservoirs provide irrigation and hydroelectric power. The Moscow Canal, the Volga–Don Canal, and the Volga–Baltic Waterway form navigable waterways connecting Moscow to the White Sea, the Baltic Sea, the Caspian Sea, the Sea of Azov and the Black Sea. High levels of chemical pollution have adversely affected the river and its habitats.

The fertile river valley provides large quantities of wheat, and also has many mineral riches. A substantial petroleum industry centers on the Volga valley. Other resources include natural gas, salt, and potash. The Volga Delta and the nearby Caspian Sea offer superb fishing grounds. Astrakhan, at the delta, is the center of the caviar industry. 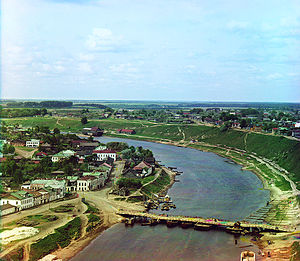 Rzhev is the uppermost town situated on the Volga (photographed c. 1910) 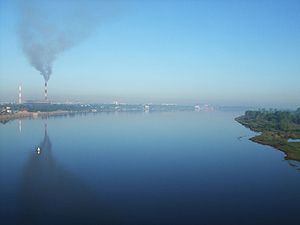 A number of large hydroelectric reservoirs were constructed on the Volga during the Soviet era. They are:

The downstream of the Volga, widely believed to have been a cradle of the Proto-Indo-European civilization, was settled by Huns and other Turkic peoples in the first millennium AD, replacing the Scythians. The ancient scholar Ptolemy of Alexandria mentions the lower Volga in his Geography (Book 5, Chapter 8, 2nd Map of Asia). He calls it the Rha, which was the Scythian name for the river. Ptolemy believed the Don and the Volga shared the same upper branch, which flowed from the Hyperborean Mountains.

Subsequently, the river basin played an important role in the movements of peoples from Asia to Europe. A powerful polity of Volga Bulgaria once flourished where the Kama joins the Volga, while Khazaria controlled the lower stretches of the river. Such Volga cities as Atil, Saqsin, or Sarai were among the largest in the medieval world. The river served as an important trade route connecting Scandinavia, Rus', and Volga Bulgaria with Khazaria and Persia.

Khazars were replaced by Kipchaks, Kimeks and Mongols, who founded the Golden Horde in the lower reaches of the Volga. Later their empire divided into the Khanate of Kazan and Khanate of Astrakhan, both of which were conquered by the Russians in the course of the 16th century Russo-Kazan Wars. The Russian people's deep feeling for the Volga echoes in national culture and literature, starting from the 12th-century Lay of Igor's Campaign.[7] The Volga Boatman's Song is one of many songs devoted to the national river of Russia.

Construction of Soviet Union-era dams often involved enforced resettlement of huge numbers of people, as well as destruction of their historical heritage. For instance, the town of Mologa was flooded for the purpose of constructing the Rybinsk Reservoir (then the largest artificial lake in the world). The construction of the Uglich Reservoir caused the flooding of several monasteries with buildings dating from the 15th and 16th centuries. In such cases the ecological and cultural damage often outbalanced any economic advantage.[8]

During the Russian Civil War, both sides fielded warships on the Volga. In 1918, the Red Volga Flotilla participated in driving the Whites eastward, from the Middle Volga at Kazan to the Kama and eventually to Ufa on the Belaya.[9]

In modern times, the city on the big bend of the Volga, currently known as Volgograd, witnessed the Battle of Stalingrad, possibly the bloodiest battle in human history, in which the Soviet Union and the German forces were deadlocked in a stalemate battle for access to the river. The Volga was (and still is) a vital transport route between central Russia and the Caspian Sea, which provides access to the oil fields of the Apsheron Peninsula. Hitler planned to use access to the oil fields of Azerbaijan to fuel future German conquests. Apart from that, whoever held both sides of the river could move forces across the river, to defeat the enemy's fortifications beyond the river.[10] By taking the river, Hitler's Germany would have been able to move supplies, guns, and men into the northern part of Russia. At the same time, Germany could permanently deny this transport route by the Soviet Union, hampering its access to oil and to supplies via the Persian Corridor.

For this reason, many amphibious military assaults were brought about in an attempt to remove the other side from the banks of the river. In these battles, the Soviet Union was the main offensive side, while the German troops used a more defensive stance, though much of the fighting was close quarters combat, with no clear offensive or defensive side. 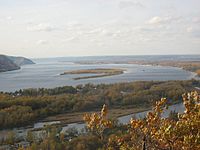 The Volga in the Zhiguli Mountains.

The first recorded people along the upper Volga were the Mari (Мари) and their west ethnic group named Merya (Мäрӹ). In the 8th and 9th centuries Slavic colonization began from Kievan Rus'. The Slavs brought Christianity to the upper Volga, and a portion of the local people adopted Christianity and gradually became East Slavs. The remainder of the Mari people migrated to the west far inland. In the course of several centuries the Slavs assimilated the indigenous Finnic populations, such as the Merya and Meshchera peoples. The surviving peoples of Volga Finnic ethnicity include the Maris and Mordvins of the middle Volga.

Apart from the Huns, the earliest Turkic tribes arrived in the 7th century and assimilated some Finnic and Indo-European population on the middle and lower Volga. The Christian Chuvash and Muslim Tatars are descendants of the population of medieval Volga Bulgaria. Another Turkic group, the Nogais, formerly inhabited the lower Volga steppes.

The Volga region is home to a German minority group, the Volga Germans. Catherine the Great had issued a Manifesto in 1763 inviting all foreigners to come and populate the region, offering them numerous incentives to do so. This was partly to develop the region but also to provide a buffer zone between the Russians and the Mongols to the East. Because of conditions in German territories, Germans responded in the largest numbers. Under the Soviet Union a slice of the region was turned into the Volga German Autonomous Soviet Socialist Republic. Others were executed or dispersed throughout the Soviet Union prior to and after World War II. 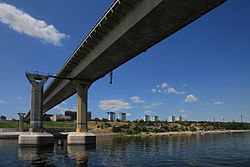 The Volga at Volgograd 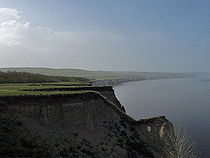 In some locations, the Volga has a rocky right bank.

The Volga, widened for navigation purposes with construction of huge dams during the years of Joseph Stalin's industrialization, is of great importance to inland shipping and transport in Russia: all the dams in the river have been equipped with large (double) ship locks, so that vessels of considerable dimensions can travel from the Caspian Sea almost to the upstream end of the river.[11]

This infrastructure has been designed for vessels of a relatively large scale (lock dimensions of 290 × 30 meters on the Volga, slightly smaller on some of the other rivers and canals) and it spans many thousands of kilometers. A number of formerly state-run, now mostly privatized, companies operate passenger and cargo vessels on the river; Volgotanker, with over 200 petroleum tankers, is one of them.

In the later Soviet era, up to the modern times, grain and oil have been among the largest cargo exports transported on the Volga. [12] Until recently access to the Russian waterways was granted to foreign vessels on a very limited scale. The increasing contacts between the European Union and Russia have led to new policies with regard to the access to the Russian inland waterways. It is expected that vessels of other nations will be allowed on Russian rivers soon.[13]