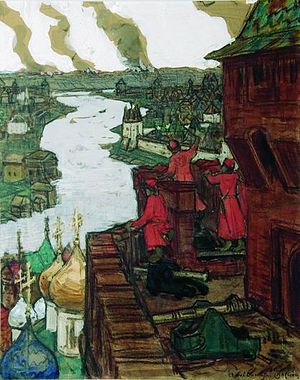 Warriors of the Golden Horde raid upon Moscow.

The Volga Tatars are a Turkic ethnic group, native to the Volga-Ural region, Russia. They are in turn subdivided into various subgroups. They compose 53% of the population of Tatarstan. Volga Tatars are Russia's second largest ethnicity.[9]

Tatars inhabiting the Republic of Tatarstan, a federal subject of Russia, constitute one third of all Tatars, while the other two thirds reside outside Tatarstan. The formation of some of the communities residing outside Tatarstan took place before the Russian Revolution of 1917 due to Tatars being specialized in trading.[10]

The emergence of ethnonym "Tatar" is disputed, with two theses trying to explain its origins. Mongol thesis, according to which etymology can be traced back to the Chinese "Ta-Tan" or "Da-Dan", is more widely accepted than Turkic one.[11] Ethnonym "Tatar" first emerged in the fifth century BC.[12]

The 14th century saw the spread of Sunni Islam among the Tatars.[12] Tatars became subjects of Russia after the Siege of Kazan in 1552.[13] Since Russians linked Tatars with the Mongol Golden Horde (that ruled Russia in the 13th century), they began to negatively stereotype the Tatar people. Due to these negative stereotypes, some of which persist in modern Russian society, recently some Tatar intellectuals have been trying to link Tatar heritage with the historic Bulgar population of today's Tatarstan. Russians were using the Tatar ethnonym during the 18th and 19th centuries to denote all Turkic inhabitants of the Russian Empire, however the Turkic peoples of the Russian Empire before the emergence of the Soviet Union did not usually self-identify as Tatars.[13] Up to the end of the 19th century, Volga Tatars mainly identified themselves as Muslims until the rehabilitation of the ethnonym Tatar occurred.[11] Russian officials used literary Tatar language to interact with the Turkic peoples of the Russian Empire before the end of 19th century. Volga Tatar role in the Muslim national and cultural movements of the Russian Empire before the 1917 Revolution is significant and this situation continued even after 1917.[10] Tatar authorities attempted in the 1990s to reverse the Russification of Tatarstan that took place during the Soviet period.[13]

"Bulgarism" is a term for the position that the Volga Tatars are significantly descended from the Volga Bulgars.[14][15][16]

A more accepted position, however, is that the Volga Tatar ethnogenesis was completed upon the arrival of the Kipchaks, Cumans and Mongols to the lands inhabited by the Volga Bulgars.[citation needed]

The majority of Volga Tatars are Kazan Tatars. They form the bulk of the Tatar population of Tatarstan. Traditionally, they inhabit the left bank of Volga river.[17]

Arab invasions forced Bulgars, Turkic people, to migrate from the Azov steppes to the Middle Volga and lower Kama region during the first half of the eighth century.[11] In the period of 10th-13th centuries, Turkic peoples, including Kipchaks, migrated from southern Siberia to Europe. They played a significant role in the Mongol invasion of Rus' in the 13th century. Tatar ethnogenesis took place after Turkic peoples, who were mixed with the Bulgars and other local inhabitants of the Volga River area, kept Kipchak dialect and became Muslims. Several new Tatar states had emerged by the 1500s after the Golden Horde fell.[18] These states were Khanate of Kazan, Astrakhan Khanate, Khanate of Sibir and Crimean Khanate.[12]

Controversy surrounds the origin of the Tatar people, whether they are descended either from Bulgars or Golden Horde.[10] According to one theory, Kazan Tatar heritage can be traced back to Kipchaks of the Golden Horde, yet according to another theory, the Tatars emerged from the Bulgar culture which had survived the Mongol conquest of 1236-1237.[11]

Mishars (or Mişär-Tatars) are an ethnographic group of Volga Tatars speaking Mishar dialect of the Tatar language. They comprise approximately 1/3 of the Volga Tatar population. They are descendants of Cuman-Kipchak tribes who mixed with the Burtas in the Middle Oka River area and Meschiora. Nowadays, they live in Chelyabinsk, Ulyanovsk, Penza, Ryazan, Nizhegorodskaya oblasts of Russia and in Tatarstan, Bashkortostan and Mordovia.

The Qasím Tatars have their capital in the town of Qasím (Kasimov in Russian transcription) in Ryazan Oblast. See "Qasim Khanate" for their history. Today, in Kasimov live 1100 Qasím Tatars. There is no reliable information about their number elsewhere.

Noqrat Tatars live in Russia's Republic of Udmurtia and Kirov Oblast. In 1920's their number was around 15.000 people.

Ethnographic subgroup of Kazan Tatars that lives in Russia's Perm Krai. Some Tatar scholars (as Zakiev) name them Ostyak Tatars. Their number is (2002) c.130.000 people. 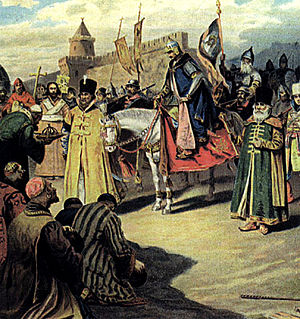 Ivan the Terrible subjugated the Tatars and forcibly converted many of them to Christianity.

A policy of Christianization of Muslim Tatars was enacted by the Russian authorities since 1552, resulting in emergence of Kriashens.[19]

Many Volga Tatars were forcibly Christianized by Ivan the Terrible during the 16th century, and later, during the 18th century.

Some scientists suppose that Suars were ancestors of the Keräşen Tatars, and they had been converted to Christianity by Armenians in the 6th century while they lived in the Caucasus. Suars, like other tribes which later converted to Islam, became Volga Bulgars, and later the modern Chuvash (who are Orthodox Christians) and Kazan Tatars (who are Muslims).

Keräşen Tatars live all over Volga-Ural area. Now they tend to be assimilated among Chuvash and Tatars. Eighty years of Atheistic Soviet rule made Tatars of both faiths not as religious as they once were. Russian names are largely the only remaining difference between Tatars and Keräşen Tatars.

Some Cuman tribes in Golden Horde were converted to Christianity in the 13th and 14th centuries (Nestorianism). Some prayers, written in that time in the Codex Cumanicus, sound like modern Keräşen prayers, but there is no information about the connection between Christian Cumans and modern Keräşens.

The famine deaths of 2 million Muslim Volga Tatars in Tatar ASSR and in Volga-Ural region in 1921-1922 was catastrophic as half of the Volga Tatar population in USSR died. This famine is also known as "terror-famine" and "famine-genocide" in Tatarstan.[20] The Soviets settled ethnic Russians after the famine in Tatar ASSR and in Volga-Ural region causing the Tatar share of the population to decline to less than 50%. All-Russian Tatar Social Center (VTOTs) has asked the United Nations to condemn the 1921 Tatarstan famine as Genocide of Muslim Tatars.[21] The 1921–1922 famine in Tatarstan has been compared to Holodomor in Ukraine.[22]

Historically, the traditional celebrations of Tatars depended largely on the agricultural cycle. 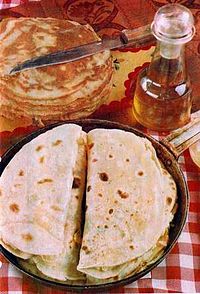 In the 1910s, they numbered about half a million in the area of Kazan. Nearly 2 million Volga Tatars died in man-made 1921–22 famine in Tatarstan by Joseph Stalin. Some 15,000 belonging to the same stem had either migrated to Ryazan in the center of Russia (what is now European Russia) or had been settled as prisoners during the 16th and 17th centuries in Lithuania (Vilnius, Grodno, and Podolia). Some 2,000 resided in St. Petersburg. Volga-Ural Tatars number nearly 7 million, mostly in Russia and the republics of the former Soviet Union. While the bulk of the population is found in Tatarstan (around 2 million) and neighbouring regions, significant number of Volga-Ural Tatars live in Siberia, Central Asia, and the Caucasus. Outside of Tatarstan, urban Tatars usually speak Russian as their first language (in cities such as Moscow, Saint-Petersburg, Nizhniy Novgorod, Ufa, and cities of the Ural and Siberia). 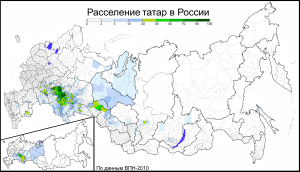 Tatar-inhabited areas in Russia according to the Russian Census of 2010
File:C0569-Kstovo-Muslim-cemetery.jpg
A Tatar cemetery in Nizhny Novgorod Oblast.

Places where Volga Tatars live include: