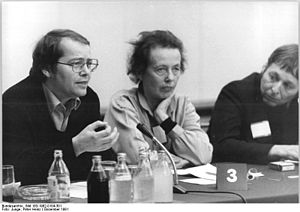 After completing his Abitur, Volker Braun worked for a time in construction before going on to study philosophy at Leipzig. There he occupied himself with the contradictions and hopes of a socialist state. He joined the SED in 1960. Nevertheless, he was regarded as critical of the GDR state, and often succeeded in getting his prose and poetry published only through the application of tactical skill.

At first his writings reflected a critical enthusiasm for the building of socialism. From 1965 to 1967, Braun worked as artistic director at the Berliner Ensemble at the invitation of Helene Weigel. After the events of the Prague Spring, he became increasingly critical of life and the possibility for reform under Socialism. After that, he came under more intense scrutiny of the Stasi. In 1972 Braun began work at the Deutsches Theater Berlin (German Theatre Berlin). In 1976 he was among those who signed the petition protesting the expatriation of Wolf Biermann.[1] From 1979 he was active again in the Berliner Ensemble. He received the Lessing Prize of East Germany in 1981. and the National Prize of East Germany in 1988.

In 1982 Braun left the Writers’ Union of the GDR. At that time his works described an increasingly depressing life in the GDR. The actors in his plays moved about with resignation in immovable settings. His Hinze-Kunze-Roman, based on Diderot’s Jacques le fataliste et son maître, received approval for publication in 1985. When it appeared it was reviewed as “absurd” and “anarchistic” by the influential critic Annalise Loeffler.[2] Klaus Hoepke, then deputy minister for culture, was disciplined for having granted permission for its publication.[3]

In 1988, Braun received the National Prize of the GDR. During the "peaceful revolution" of 1989, he was a supporter of an independent "third way" for the GDR. He was among the first signatories of the appeal "Fuer unser Land."[4] After reunification, he became critically engaged in analysing the reasons for the collalpse of the GDR. In this connection, he undertook work with the west-Marxist journal, "Das Argument," edited by Wolfgang Fritz Haug.