Volodymyr-Volynsky (Ukrainian: Володимир-Волинський, Polish: Włodzimierz Wołyński, Russian: Влади́мир-Волы́нский, Yiddish: לודמיר‎, Latin: Lodomeria) is a city located in Volyn Oblast, in north-western Ukraine. Serving as the administrative centre of the Volodymyr-Volynskyi Raion, the city itself is also designated as a separate raion within the oblast. The city is the historic centre of the region of Volhynia and the historic capital of the Principality of Volhynia. Population: 38,870 (2013 est.)[1].

The mediaeval Latin name of the town became the namesake of the 19th century Austro-Hungarian Kingdom of Galicia and Lodomeria[citation needed], of which the town itself was not a part. 5 kilometres (3 miles) south from Volodymyr is Zymne, where the oldest Orthodox Monastery in Volynia is located.

The city is one of the oldest towns in Ruthenia. It took its name after King Volodymyr the Great (born in the Budyatychi, Ukrainian: Будятичі, near contemporary Volodymyr-Volynsky), who founded a stronghold on the lands taken from polish tribe of Lendians around 981.[2] In 988 the city became the capital of Volodymyr Principality and a seat of an Orthodox bishopric as mentioned in the Primary Chronicle.

In 1160 the building of Sobor of Dormition of The Holy Mother of God was completed.[3] By 13th century the city became part of Galicia–Volhynia as one of the most important trading towns in the region. Since the conquest of Batu Khan in 1240, the city was suboridinated to Mongol Empire together with other ruthenian principalities. In the 14th century, Metropolitan Theognostus of all Rus' resided in the city for several years before moving to Moscow.[4]

In 1349 King Casimir the Great captured the city, and subsequently it remained in the Kingdom of Poland. In 1370 it was taken by the Grand Duchy of Lithuania and it was not until the Union of Lublin of 1569 that it returned to the Crown of Poland. In the meantime the city was given Magdeburg rights in 1431. From 1566 to 1795 it was part of the Volhynian Voivodeship. It was a royal city of Poland.

On July 17, 1792 a battle (the Battle of Włodzimierz) took place in the vicinity of the town: a numerically inferior Polish force led by Tadeusz Kościuszko defeated the Russian army. The city remained a part of Poland until the Third Partition of Poland of 1795, when the Russian Empire annexed it. Volodymyr-Volynsky stayed within Russian Partition till 1917.

In 18th and 19th centuries the town started to grow rapidly, mostly thanks to large numbers of Jews settling there. By the second half of 19th century they made up the majority of local inhabitants. According to Geographical Dictionary of the Kingdom of Poland[5] in late 19th century the city had 8336 inhabitants, 6122 of them Jews.

Immediately after World War I the area became disputed by Poland, Bolshevist Russia and Ukrainian People's Republic, with the Polish 17th Infantry Regiment capturing it overnight of January 23, 1919. In the interbellum the city was a seat of a powiat within the Volhynian Voivodeship and an important garrison was located there.

Following the Nazi-Soviet Pact the city was seized by Soviet forces in 19 September 1939. In 23 June 1941 the city was occupied by Germany. During World War II, a German concentration camp was located near the city. A series of mass graves were discovered in 1997, with exhumations completed by 2013. Originally thought to be part of NKVD repressions, they were shown in 2012 to be part of the Holocaust and attributed to Einsatzgruppen C[6] and local collaborators.[7] Anthropological analysis of the remains led to the conclusion that three quarters of the victims were women and children. The 747 victims were reinterred in local city cemeteries.[8] In the course of World War II it was ultimately captured by the Red Army in 20 July 1944 and annexed to the Ukrainian SSR. A Cold War air base was located north-east of the town at Zhovtnevy.

Since 1991 the city has formed part of Ukraine.

The oldest place of worship in the town was the so-called Khram of Volodymyr, erected several kilometres from the modern town's centre and first mentioned in a latopis (chronicle) of 1044. The oldest existing church is the Assumption Cathedral built by Mstyslav Izyaslavovych in 1160. By late 18th century it fell into disuse and finally collapsed in 1829, but was restored between 1896 and 1900. The third of the old Orthodox churches is an Orthodox Basil the Great's cathedral, was erected probably in 14th or 15th centuries, though local legends attribute its construction to Volodymyr the Great who was to build it some time after 992. 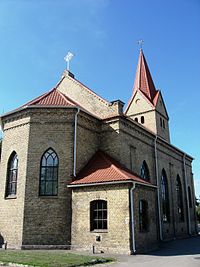 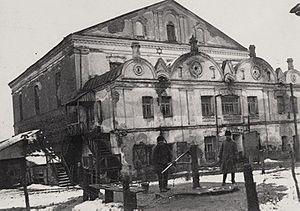 Great Synagogue, was destroyed by Soviet power after WWII

In 1497 duke Alexander Jagiellon erected a Catholic church of Holy Trinity and a Dominican monastery. In 1554 another wooden Catholic church was founded by Princess Anna Zbaraska, which was later replaced by a new St. Joahim's and Anna's church in 1836. In 1755 a Jesuit church was erected there by the starost of Słonim Ignacy Sadowski and in 1780 a Greek Catholic Josaphat's church was added to the list. Following Russian Empire's takeover of the town in the effect of the Partitions of Poland, both latter shrines were confiscated and donated to the authorities of the Orthodox Church, who converted them to an Orthodox monastery and church, respectively, while the Dominican monastery was converted to an administrative building.

There also exists Volodymyr-Volynsky Historical Museum, an architectural monument of the 19th century.