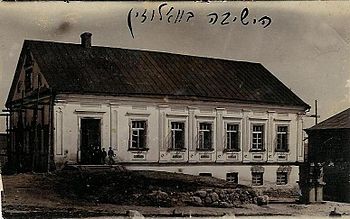 Old photo of the Volozhin yeshiva

The Volozhin Yeshiva, also known as Etz Chaim Yeshiva, was a prestigious Lithuanian yeshiva (talmudical college) located in the town of Volozhin, Russia, (now Valozhyn, Belarus). It was founded by Rabbi Chaim Volozhin, a student of the famed Vilna Gaon, and trained several generations of scholars, rabbis, and leaders. Completed in 1806, it was the first modern yeshiva to be established and became known as the "mother of all yeshivas," it serving as a model for all later yeshivas which opened in Lithuania.[1]

The institution reached its zenith under the leadership of Rabbi Naftali Zvi Yehuda Berlin, who became the rosh yeshiva (dean) in 1854.[1] In 1892, demands of the Russian authorities to increase secular studies forced the yeshiva to close. It reopened on a smaller scale in 1899 and functioned until 1939 when World War II broke out. During the war German soldiers used the building as a stable and it was subsequently converted into a canteen and deli.[2] The site was returned to the Jewish community of Belarus in 1989.[2] The building is considered a cultural and architectural landmark[2] and in 1998, the Volozhin Yeshiva was registered on the State List of Historical and Cultural Monuments of the Republic of Belarus.[3] 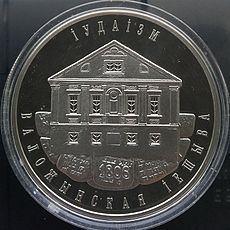 The yeshiva was founded in 1803 by Rabbi Chaim Volozhin. After his death in 1821, he was succeeded as head of the yeshiva by his son, Isaac. When Isaac died in 1849, Rabbi Eliezer Fried was appointed head of the yeshiva, with Rabbi Naftali Zvi Yehuda Berlin as his assistant. Rabbi Fried died soon after, in 1854, whereupon Rabbi Berlin became the new head along with Rabbi Joseph Ber Soloveichik, Reb Chaim Volozhin's great-grandson who was the assistant rosh yeshiva. In 1865, Soloveichik left to become a rabbi in Slutsk.

The Volozhin yeshiva closed in 1892. The proximate reason for the closure was the Russian government's demand for a dramatic increase in the amount of time spent teaching certain secular studies. Rabbi Berlin refused to comply and allowed the government to close the yeshiva. Some have theorized that Rabbi Berlin was not so much opposed to secular studies as to the overwhelming amount of time demanded: "All teachers of all subjects must have college diplomas ... no Judaic subjects may be taught between 9 AM and 3 PM ... no night classes are allowed ... total hours of study per day may not exceed ten."

Others, such as historian Shaul Stampfer, say the root of the problem was Rabbi Berlin's attempt to install his son as Rosh Yeshiva in the face of opposition. Russian government documents that have recently come to light seem to indicate that this was a consideration in the yeshiva's closure.[4]

Rabbi Refael Shapiro, the son-in-law of Rabbi Naftali Zvi Yehuda Berlin, reopened the yeshiva in 1899, albeit on a smaller scale. It remained open until World War II, and was reestablished, also on a small scale, in Israel after the war.

In 2000, the Valozhyn authorities returned the building to the Jewish Religious Union of Belarus, an Orthodox Jewish umbrella organization. In 2007, the government of Belarus threatened to repossess the building unless the community raised $20,000 in order to renovate it. The Jewish community in America took action and Agudath Israel raised money to restore the site.[5]