From Infogalactic: the planetary knowledge core
Jump to: navigation, search
For other uses, see Volt (disambiguation).

The volt (symbol: V) is the derived unit for electric potential, electric potential difference (voltage), and electromotive force.[1] The volt is named in honour of the Italian physicist Alessandro Volta (1745–1827), who invented the voltaic pile, possibly the first chemical battery.

In alternating current, the voltages increase, decrease and change direction at regular intervals. As a result, voltage for alternating current almost never refers to the voltage at a particular instant, but instead is the root mean square (RMS) voltage, which is a way of defining an effective voltage when calculating power (RMS voltage × RMS current). In most cases, the fact that a voltage is an RMS voltage is not explicitly stated, but assumed.

It can also be expressed as amperes times ohms (current times resistance, Ohm's law), watts per ampere (power per unit current, Joule's law), or joules per coulomb (energy per unit charge) which is also equivalent to electron volts per elementary charge:

The "conventional" volt, V90, defined in 1988 by the 18th General Conference on Weights and Measures and in use from 1990, is implemented using the Josephson effect for exact frequency-to-voltage conversion, combined with the cesium frequency standard. For the Josephson constant, KJ = 2e/h (where e is the elementary charge and h is the Planck constant), the "conventional" value KJ-90 is used:

This standard is typically realized using a series connected array of several thousand or tens of thousands of junctions, excited by microwave signals between 10 and 80 GHz (depending on the array design).[3] Empirically, several experiments have shown that the method is independent of device design, material, measurement setup, etc., and no correction terms are required in a practical implementation.[4]

In the water flow analogy sometimes used to explain electric circuits by comparing them with water-filled pipes, voltage (difference in electric potential) is likened to difference in water pressure.

The relationship between voltage and current is defined (in ohmic devices like resistors) by Ohm's Law. Ohm's Law is analogous to the Hagen–Poiseuille equation, as both are linear models relating flux and potential in their respective systems. 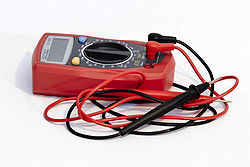 A multimeter can be used to measure the voltage between two positions.

The voltage produced by each electrochemical cell in a battery is determined by the chemistry of that cell. Cells can be combined in series for multiples of that voltage, or additional circuitry added to adjust the voltage to a different level. Mechanical generators can usually be constructed to any voltage in a range of feasibility.

In 1800, as the result of a professional disagreement over the galvanic response advocated by Luigi Galvani, Alessandro Volta developed the so-called voltaic pile, a forerunner of the battery, which produced a steady electric current. Volta had determined that the most effective pair of dissimilar metals to produce electricity was zinc and silver. In the 1880s, the International Electrical Congress, now the International Electrotechnical Commission (IEC), approved the volt as the unit for electromotive force. They made the volt equal to 108 cgs units of voltage, the cgs system at the time being the customary system of units in science. They chose such a ratio because the cgs unit of voltage is inconveniently small and one volt in this definition is approximately the emf of a Daniell cell, the standard source of voltage in the telegraph systems of the day.[7] At that time, the volt was defined as the potential difference [i.e., what is nowadays called the "voltage (difference)"] across a conductor when a current of one ampere dissipates one watt of power.

Prior to the development of the Josephson junction voltage standard, the volt was maintained in national laboratories using specially constructed batteries called standard cells. The United States used a design called the Weston cell from 1905 to 1972.

This SI unit is named after Alessandro Volta. As with every International System of Units (SI) unit named for a person, the first letter of its symbol is upper case (V). However, when an SI unit is spelled out in English, it should always begin with a lower case letter (volt)—except in a situation where any word in that position would be capitalized, such as at the beginning of a sentence or in material using title case. Note that "degree Celsius" conforms to this rule because the "d" is lowercase.— Based on The International System of Units, section 5.2.