From Infogalactic: the planetary knowledge core
Jump to: navigation, search
For other uses, see Volume (disambiguation). 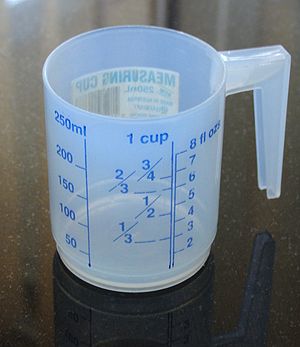 A measuring cup can be used to measure volumes of liquids. This cup measures volume in units of cups, fluid ounces, and millilitres.

Volume is the quantity of three-dimensional space enclosed by some closed boundary, for example, the space that a substance (solid, liquid, gas, or plasma) or shape occupies or contains.[1] Volume is often quantified numerically using the SI derived unit, the cubic metre. The volume of a container is generally understood to be the capacity of the container, i. e. the amount of fluid (gas or liquid) that the container could hold, rather than the amount of space the container itself displaces.

Three dimensional mathematical shapes are also assigned volumes. Volumes of some simple shapes, such as regular, straight-edged, and circular shapes can be easily calculated using arithmetic formulas. Volumes of a complicated shape can be calculated by integral calculus if a formula exists for the shape's boundary. Where a variance in shape and volume occurs, such as those that exist between different human beings, these can be calculated using three-dimensional techniques such as the Body Volume Index. One-dimensional figures (such as lines) and two-dimensional shapes (such as squares) are assigned zero volume in the three-dimensional space.

In differential geometry, volume is expressed by means of the volume form, and is an important global Riemannian invariant. In thermodynamics, volume is a fundamental parameter, and is a conjugate variable to pressure.

Volume measurements from the 1914 The New Student's Reference Work.
Approximate conversion to millilitres:[3]

In the International System of Units (SI), the standard unit of volume is the cubic metre (m3). The metric system also includes the litre (L) as a unit of volume, where one litre is the volume of a 10-centimetre cube. Thus

Small amounts of liquid are often measured in millilitres, where

Various other traditional units of volume are also in use, including the cubic inch, the cubic foot, the cubic mile, the teaspoon, the tablespoon, the fluid ounce, the fluid dram, the gill, the pint, the quart, the gallon, the minim, the barrel, the cord, the peck, the bushel, and the hogshead.

Capacity is defined by the Oxford English Dictionary as "the measure applied to the content of a vessel, and to liquids, grain, or the like, which take the shape of that which holds them".[4] (The word capacity has other unrelated meanings, as in e.g. capacity management.) Capacity is not identical in meaning to volume, though closely related; the capacity of a container is always the volume in its interior. Units of capacity are the SI litre and its derived units, and Imperial units such as gill, pint, gallon, and others. Units of volume are the cubes of units of length. In SI the units of volume and capacity are closely related: one litre is exactly 1 cubic decimetre, the capacity of a cube with a 10 cm side. In other systems the conversion is not trivial; the capacity of a vehicle's fuel tank is rarely stated in cubic feet, for example, but in gallons (a gallon fills a volume of 0.1605 cu ft).

The volumetric flow rate in fluid dynamics is the volume of fluid which passes through a given surface per unit time (for example cubic meters per second [m3 s−1]).

In calculus, a branch of mathematics, the volume of a region D in R3 is given by a triple integral of the constant function

and is usually written as:

The volume integral in cylindrical coordinates is

as the azimuth and

Volume ratios for a cone, sphere and cylinder of the same radius and height 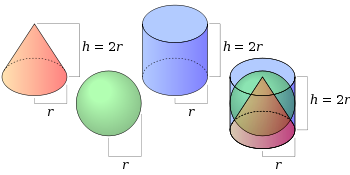 A cone, sphere and cylinder of radius r and height h

The above formulas can be used to show that the volumes of a cone, sphere and cylinder of the same radius and height are in the ratio 1 : 2 : 3, as follows.

Let the radius be r and the height be h (which is 2r for the sphere), then the volume of cone is

the volume of the sphere is

while the volume of the cylinder is

The discovery of the 2 : 3 ratio of the volumes of the sphere and cylinder is credited to Archimedes.[7]

The surface area of the circular disk is

The radius of the circular disks, defined such that the x-axis cuts perpendicularly through them, is

where y or z can be taken to represent the radius of a disk at a particular x value.

Using y as the disk radius, the volume of the sphere can be calculated as

This formula can be derived more quickly using the formula for the sphere's surface area, which is

. The volume of the sphere consists of layers of infinitesimally thin spherical shells, and the sphere volume is equal to

The cone is a type of pyramidal shape. The fundamental equation for pyramids, one-third times base times altitude, applies to cones as well.

The radius of each circular disk is r if x = 0 and 0 if x = h, and varying linearly in between—that is,

The surface area of the circular disk is then

The volume of the cone can then be calculated as

and after extraction of the constants:

Any oriented Riemannian (or pseudo-Riemannian) manifold has a natural volume (or pseudo volume) form. In local coordinates, it can be expressed as

are the 1-forms providing an oriented basis for the cotangent bundle of the n-dimensional manifold. Here,

is the absolute value of the determinant of the matrix representation of the metric tensor on the manifold.