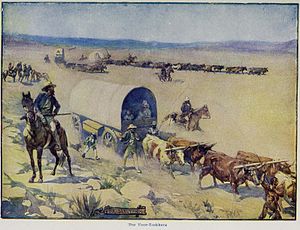 Voortrekkers in a 1909 illustration 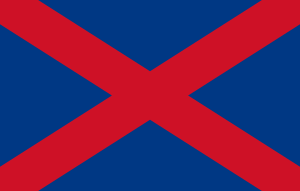 The Voortrekkers (Afrikaans and Dutch for pioneers, literally "fore-pullers", "those in front who pull", "fore-trekkers") were Afrikaner emigrants during the 1830s and 1840s who left the Cape Colony (British at the time, but founded by the Dutch) moving into the interior of what is now South Africa in what is known as the Great Trek. The Great Trek consisted of a number of mass movements under a number of different leaders.

Voortrekker Leaders arranged in order by size of party {number of families in brackets}:- [1]

The total number of families that trekked under a trek leader is 1093. From available sources it was found that during the years 1835 to 1845 a total of about 2540 families took part in the Great Trek. [2] 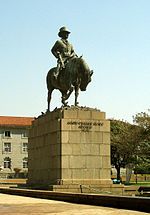 The Voortrekkers mainly came from the farming community of the Eastern Cape although some (such as Piet Retief) originally came from the Western Cape farming community while others (such as Gerrit Maritz) were successful tradesmen in the frontier towns. Some of them were wealthy men though most were not as they were from the poorer communities of the frontier. It was recorded[where?][by whom?] that the 33 Voortrekker families at the Battle of Vegkop lost 100 horses, between 4,000 and 7,000 cattle, and between 40,000 and 50,000 sheep.[citation needed]

The Voortrekkers were mainly of Trekboer (migrating farmer) descent living in the eastern frontiers of the Cape. Hence, their ancestors had long established a semi-nomadic existence of trekking into expanding frontiers.[3] Amongst the Voortrekkers were poor men too belonging to the squatter or bywoner class.[4]

The reasons for the mass emigration from the Cape Colony have been much discussed over the years. Afrikaner historiography has emphasized the hardships endured by the frontier farmers which they blamed on British policies of pacifying the Xhosa tribes.[citation needed] Other historians[who?] have emphasized the harshness of the life in the Eastern Cape (which suffered one of its regular periods of drought in the early 1830s) compared to the attractions of the fertile country of Natal, the Orange Free State and the Transvaal. Growing land shortages have also been cited as a contributing factor. The true reasons were obviously very complex and certainly consisted of both "push" factors (including the general dissatisfaction of life under British rule) and "pull" factors (including the desire for a better life in better country.)

Reasons for the Great Trek were many. 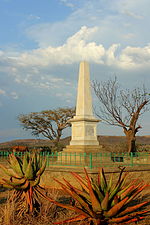 View of the Bloukrans Memorial commemorating the death of the Boers who lost their lives at Moordspruit, 17 February 1838.

On 17 February 1838 Dingane sent an impi against the Voortrekkers which resulted in the Blaauwkrans Massacre where over 500 Voortrekkers were killed by Zulu warriors.

Amongst those killed were:-

Andries Pretorius filled the Voortrekker leadership vacuum, hoping to punish Dingane, retrieve stolen livestock and reclaim the land Dingane had granted to Retief. When Dingane sent an impi (armed force) of around 15,000 to 21,000 Zulu warriors to attack the local contingent of Voortrekkers in response, the Voortrekkers defended themselves at a battle at Ncome River (called the Battle of Blood River) on 16 December 1838, where the vastly outnumbered Voortrekker contingent defeated the Zulu warriors. This date later became known as the Day of the Vow, as the Voortrekkers made a vow to God that they would honor the date if he were to deliver them from what they viewed as almost insurmountable odds. The victory of the besieged Voortrekkers at Ncome River was considered[by whom?] a turning point. 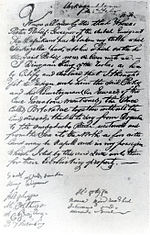 The Voortrekkers set up the Natalia Republic in 1839 which was situated between the Tugela River and Port St. Johns as per the land treaty between Dingane and Retief, but Britain annexed this area in 1843, whereupon most of the local Boers trekked further north, joining other Voortrekkers who had established themselves in that region.

Migration to the Waterberg

Other Voortrekkers migrated north to the Waterberg area, where some of them settled and began ranching operations, which activities enhanced the pressure placed on indigenous wildlife by pre-existing tribesmen, whose Bantu predecessors had previously initiated such grazing in the Waterberg region. These Voortrekkers arriving in the Waterberg area believed they had reached the Nile River area of Egypt - based upon their understanding of the local topography.[11][12]

Struggle against the Ndebele

Armed conflict, first with the Ndebele people under Mzilikazi in the area which was to become the Transvaal, then against the Zulus under Dingane, went the Voortrekkers' way, mostly because of their tactics, their horsemanship and the effectiveness of their muzzle-loading guns. This success led to the establishment of a number of small Boer republics, which slowly coalesced into the Orange Free State and the South African Republic. These two states would survive until their annexation in 1900 by the United Kingdom during the Second Anglo-Boer War.

The Voortrekkers had a distinctive flag, used mainly by the Voortrekkers who followed Andries Hendrik Potgieter, which is why it was also known as the Potgieter Flag. This flag was used as the flag of the Zoutpansberg Republic until this republic was incorporated into the Transvaal Republic also known as the South African Republic. A version of this flag was used at Potchefstroom, one of the first independent Boer towns and republics established by local Voortrekkers.