The vortex ring gun is an experimental non-lethal weapon for crowd control that uses high-energy vortex rings of gas to knock down people or spray them with marking ink or other chemicals.

The concept was explored by the US Army starting in 1998, and by some commercial firms. Knockdown of distant individuals currently seems unlikely even if the rings are launched at theoretical maximum speed, the speed of sound.[1] As for the delivery of chemicals, leakage during flight is still a problem.[citation needed]

Weapons based on similar principles but different designs and purposes have been described before, typically using acetylene-air or hydrogen–oxygen explosions to create and propel the vortices.[2] 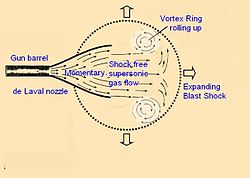 In a typical concept, a blank cartridge is fired into a gun barrel that has a diverging nozzle screwed onto the muzzle.[3] In the nozzle, the short pulse of high pressure gas briefly accelerates to a supersonic exit velocity, whereupon a portion of the exhaust transforms from axial flow into a subsonic, high spin vortex ring with the potential energy to fly hundreds of feet.[4][5]

The nozzle of a vortex ring gun is designed to both contain the short pulse of accelerating gas until the maximum pressure is lowered to atmospheric and to straighten the exhaust into an axial flow.[6] The objective is to form the vortex ring with the highest possible velocity and spin by colliding a short pulse of a supersonic jet stream against the relatively stagnant air behind the spherically expanding Blast Shock. Without the nozzle, the high pressure jet stream is reduced to atmospheric by standing shock waves at the muzzle, and the resulting vortex ring is not only formed by a lower velocity jet stream but also degraded by turbulence.[7]

The end product was to be a kit for quickly converting an existing lethal weapon to a non-lethal vortex ring generator that could knock-down an individual or spray him with a dye, malodorous chemical, or incapacitating chemical. The kit, consisting of a nozzle with chemical reservoirs and belts of blank 40mm cartridges modified to detonate at pressures up to 100,000 psi (690 KN/sqN), was being designed for the Navy MK19-3.[9] The 40mm grenade machine gun was selected because firing at 4-10 shots per second resonates with many body parts and causes a stronger impact effect.[10]

Single shot field tests performed without optimized nozzles led to the conclusion vortex rings were unsuitable for non-lethal crowd control. This conclusion was reached partly because knock down did not appear to be feasible at the desired range of 100 feet (30 m), partly because of the excessive spillage onto bystanders under the flight path if used to transport chemicals or dyes, and partly because the flight noise and speed enabled it to be easily avoided at the downrange target.[11][12] The foremost reliability issue with this project was turbulence caused by the high-energy propellant burning outside the barrel.