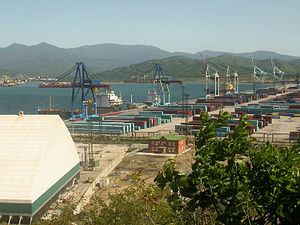 Vostochny Port (Russian: Восто́чный порт) is an intermodal container port at the eastern end of the Trans-Siberian Railway.[1] It is the largest port in the Russian Far East. It is located in Vrangel (an eastern suburb of Nakhodka), Primorsky Krai. A deepwater port on Nakhodka Bay (part of the Sea of Japan), it operates year-round and is suitable for handling large tonnage ships. Vostochny is a warm-water port[2] in the Russian Far East.

The largest stevedore in port is JSC Vostochny Port, which specializes in coal handling with conveyor equipment.

Vostochny Port also consists of VostCo Dry Dock, which was the construction site of the concrete gravity base structures LUN-A and PA-B for the development of the Sakhalin Island offshore oil fields.

Another division of Vostochny port is the Special Sea Oil Terminal which is located in Kozmino Bay, with cargo throughput almost 15 million tonnes.