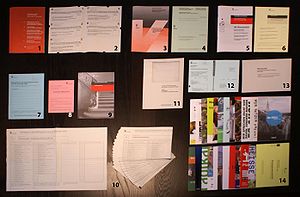 In Switzerland, without need to register, every citizen receive at home the ballot papers and information brochure for each voting (and can send it back by post). Switzerland has a direct democracy system and votes are organised about four times a year.

Voting is a method for a group such as a meeting or an electorate to make a decision or express an opinion—often following discussions, debates, or election campaigns. Democracies elect holders of high office by voting.

A vote is a formal expression of an individual's choice in voting, for or against some motion (for example, a proposed resolution), for or against some ballot question, for a certain candidate, a selection of candidates, or a political party. A secret ballot has come to be the practice to prevent voters from being intimidated and to protect their political privacy.

Voting usually takes place at a polling station; it is voluntary in some countries, compulsory in others, such as Australia.

A side effect of a single vote per race is vote splitting, which tends to elect candidates that do not support centrism, and tends to produce a two-party system. An alternative to a single-vote system is approval voting.

To understand why a single vote per race tends to favor less centric candidates, consider a simple lab experiment where students in a class vote for their favorite marble. If five marbles are assigned names and are placed "up for election," and if three of them are green, one is red, and one is blue, then a green marble will rarely win the election. The reason is that the three green marbles will split the votes of those who prefer green. In fact, in this analogy, the only way that a green marble is likely to win is if more than sixty percent of the voters prefer green. If the same percentage of people prefer green as those who prefer red and blue, that is to say if 33 percent of the voters prefer green, 33 percent prefer blue, and 33 percent prefer red, then each green marble will only get eleven percent of the vote, while the red and blue marbles will each get 33 percent, putting the green marbles at a serious disadvantage. If the experiment is repeated with other colors, the color that is in the majority will still rarely win. In other words, from a purely mathematical perspective, a single-vote system tends to favor a winner that is different from the majority. If the experiment is repeated using approval voting, where voters are encouraged to vote for as many candidates as they approve of, then the winner is much more likely to be any one of the five marbles, because people who prefer green will be able to vote for every one of the green marbles.

A development on the 'single vote' system is to have two-round elections, or repeat first-past-the-post. The winner must receive a majority, which is more than half.[1] If subsequent votes must be used, often a candidate, the one with the fewest votes or anyone who wants to move their support to another candidate, is removed from the ballot.

An alternative to the Two-round voting system is the single round instant-runoff voting system (Also referred to as Alternative vote or Preferential voting) as used in some elections in Australia, Ireland and the USA. Voters rank each candidate in order of preference (1,2,3 etc.). Votes are distributed to each candidate according to the preferences allocated. If no single candidate has 50% or more votes then the candidate with the least votes is excluded and their votes redistributed according to the voters nominated order of preference. The process repeating itself until a candidate has 50% or more votes. The system is designed to produce the same result as an exhaustive ballot but using only a single round of voting.

In a voting system that uses a multiple vote, the voter can vote for any subset of the alternatives. So, a voter might vote for Alice, Bob, and Charlie, rejecting Daniel and Emily. Approval voting uses such multiple votes.

In a voting system that uses a ranked vote, the voter has to rank the alternatives in order of preference. For example, they might vote for Bob in first place, then Emily, then Alice, then Daniel, and finally Charlie. Ranked voting systems, such as those famously used in Australia, use a ranked vote.

In a voting system that uses a scored vote (or range vote), the voter gives each alternative a number between one and ten (the upper and lower bounds may vary). See cardinal voting systems.

Some "multiple-winner" systems may have a single vote or one vote per elector per available position. In such a case the elector could vote for Bob and Charlie on a ballot with two votes. These types of systems can use ranked or unranked voting, and are often used for at-large positions such as on some city councils.

Most of the time, when the citizens of a country are invited to vote, it is for an election. However, people can also vote in referendums and initiatives. Since the end of the eighteenth century, more than five hundred national referendums (including initiatives) were organised in the world; among them, more than three hundred were held in Switzerland.[2] Australia ranked second with dozens of referendums.

Results may lead at best to confusion, at worst to violence and even civil war, in the case of political rivals. Many alternatives may fall in the latitude of indifference—they are neither accepted nor rejected. Avoiding the choice that the most people strongly reject may sometimes be at least as important as choosing the one that they most favor.

There are social choice theory definitions of seemingly reasonable criteria that are a measure of the fairness of certain aspects of voting, including non-dictatorship, unrestricted domain, non-imposition, Pareto efficiency, and independence of irrelevant alternatives but Arrow's impossibility theorem states that no voting system can meet all these standards. Yet in 2011, there has been a suggestion for a better and more fair voting system, which was actually suggested to developed countries, e.g. UK, US, etc.

Under this implementation, negative voting is no different from a positive voting system, when only two candidates are on the ballot. However, in the case of three or more candidates, each negative vote for a candidate counts positively towards all of the other candidates.

Three candidates are running for the same seat. Two hypothetical election results are given, contrasting positive and negative voting. Both polling accuracy and voter turnout are assumed to be 100 percent.

A-voters again, with the clear advantage of 40%, logically vote for Candidate A. B-voters again, split exactly in half. Each B-voter decides to vote negatively against their least favorite candidate, with the reasoning that this negative vote allows them to express approval for the two other candidates. C-voters also decide to vote negatively against Candidate A, reasoning along similar lines. Candidate B is the winner with 0 votes. Enough negative votes were cast against Candidate B's opponents, resulting in negative totals. Candidate A, despite having polled at 40%, winds up with -5%, offset due to the aggregate 45% of negative votes cast by B and C voters. Candidate C ends up with -15%.

Proxy voting is the type of voting where a registered citizen who is able to vote passes on his or her vote to a different voter or electorate legitimately.

In South Africa, there is a strong presence of anti-voting campaigns by poor citizens. They make the structural argument that no political party truly represents them. For instance, this resulted in the "No Land! No House! No Vote!" Campaign which becomes very prominent each time the country holds elections.[3][4] The campaign is prominent among three of South Africa's largest social movements: the Western Cape Anti-Eviction Campaign, Abahlali baseMjondolo, and the Landless Peoples Movement.

Other social movements in other parts of the world also have similar campaigns or non-voting preferences. These include the Zapatista Army of National Liberation and various Anarchist oriented movements.

In some jurisdictions it is possible to make a blank vote, carrying out the act of voting, which may be compulsory, without selecting any candidate or option, often as an act of protest. While it is always possible in a secret ballot not to express any preference by filling in the voting form incorrectly, formal blank votes are counted, while spoiled papers are simply ignored.

Modern political science has questioned whether average citizens have sufficient political information to cast meaningful votes. A series of studies coming out of the University of Michigan in the 1950s and 1960s argued that voters lack a basic understanding of current issues, the liberal–conservative ideological dimension, and the relative ideological dilemma.[5]

Studies from other institutions have suggested that the physical appearance of candidates is a criterion upon which voters base their decision.[6][7]

Christadelphians, Jehovah's Witnesses, Old Order Amish, Rastafarians, and some other religious groups have a policy of not participating in politics through voting.[8]

Whenever several people who do not all agree need to make some decision, voting is a very common way of reaching a decision peacefully. The right to vote is usually restricted to certain people. Members of a society or club, or shareholders of a company, but not outsiders, may elect its officers, or adopt or change its rules, in a similar way to the election of people to official positions. A panel of judges, either formal judicial authorities or, say, judges of a competition, may make decisions by voting. A group of friends or members of a family may decide which film to see by voting. The method of voting can range from formal submission of written votes, through show of hands, voice voting or audience response systems, to informal noting which outcome seems to be preferred by more people.