Viacheslav Chornovil (Ukrainian: Вячесла́в Макси́мович Чорнові́л) (December 24, 1937 in Yerky, Katerynopil Raion, Kiev Oblast – March 25, 1999, near Boryspil, Kiev Oblast) was a Ukrainian politician. A prominent Ukrainian dissident in the Soviet Union, he was arrested multiple times in the 1960s and 1970s for his political views. A long-time advocate of Ukrainian independence, he was one of the most prominent political figures of the late 1980s and early 1990s who paved the path of the contemporary Ukraine to its independence.

Chornovil enrolled into the University of Kiev initially at the College of Philology (faculty), but after the first semester transferred to the College of Journalism. In 1958 due to conflict in the university he took a break from studying and went for construction project in Zhdanov of a blast furnace and later worked for the "Kiev Komsomolets". Chornovil was a member of the Komsomol of Ukraine. He graduated in 1960 with honors and defended his diploma with a thesis "Publicistic work of Borys Hrinchenko".

Chornovil worked for various newspapers and in television in Lviv and Kiev between 1960-64. In 1964 he moved to Vyshhorod and participated in the construction of the Kiev HES (see Kiev Reservoir). During the same year Chornovil also enrolled into the aspirantura (see Candidate of Sciences) of the Kiev Pedagogical Institute, but was not allowed to study. On September 4, 1965 together with Ivan Dzyuba and Vasyl Stus, Chornovil conducted protest in the movie theater "Ukraina" at the premier of the film "Shadows of Forgotten Ancestors". After that he was fired out of his job, searched by authorities. For refusing to stand witness and testify at the trials of Horyn brothers, Chornovil was given three months of forced labor.

He became known as a dissident after documenting the illegal imprisonment of some Ukrainian intellectuals. Later, he covered a similar story about twenty Ukrainians ("Woe from Wit").[6] He was charged with slander and sentenced to three years in the prison of maximum security,[7] but was released in half the time under a general amnesty in 1967 to celebrate the fiftieth anniversary of the October Revolution. The Times awarded him the Tomalin Prize for the documentation of the trials. During his exile in 1969 Chornovil married to Atena Pashko. In 1970 he managed to find a job at the meteorological station in Zakarpattia, provided a manual labor for an archaeological expedition to the Odessa Region, and at the railroad station "Sknyliv" in Lviv. At the same time Chornovil created an underground magazine "Ukrainian informer". Since 1971 he worked in the Lviv department of the Ukraine Nature Conservation Society.

He was imprisoned another time for being involved in Ukrainian separatist movements and affiliated publications in 1972. This time Chornovil was given six years of imprisonment and three more years of exile. His term he spent in Mordva camps for political prisoners in the villages of Ozernoye and Barashevo. Half of his term Chornovil spent in a penalized isolation cell and a room of cell type (PKT). Chornovil renounced his Soviet citizenship and decided to move to Canada in 1975, but was not permitted to do so. He joined the Ukrainian Helsinki Group, which helped to monitor and enforce the 1975 Helsinki Accords. In 1978 by train Chornovil was exiled to the village of Chappandu (Yakutia) where he worked as a laborer at a local state farm (sovkhoz), later as a supplier in Nyurba. In 1978 he was admitted to the International PEN society.

He was arrested yet again for "attempted rape" in a falsified case in April 1980 and was sentenced to five years in prison,[8] after which he carried out a 120-day-long hunger strike. He was released in 1983 following the protest of the Prosecutor of Yakutia not to allow return to Ukraine. In May 1985 Chornovil found job as a stoker at the Lviv Miskrembudtrest (City Maintenance Construction Trust) and at a specialized school. In the late 1980s actively participated in the Ukrainian national movement becoming of the first leaders of the People's Movement of Ukraine (better known as Rukh). In 1988 there was a first attempt to create the "Democratic Front in support of Perestroika" in Lviv only to be dispersed by the Soviet OMON canine unit. Later he promoted several nationally oriented actions one of them was the Human chain that took place on January 21, 1990 and commemorated the act of unification of the Ukrainian lands in 1919 (see Act Zluky).

Chornovil ran for President of Ukraine in 1991 but was defeated, winning only in Ukrainian Galicia. He was one of the most important members of the People's Movement of Ukraine, a right-wing party. He was elected to the Verkhovna Rada for the People's Movement of Ukraine in 1994 and 1998 and was the head of that party. In 1999 his party was almost dissolved due to disagreements within. There are speculations that the failure to liquidate the party led to the road accident that took Chornovil's life. That fact is mentioned in the documentary movie of Volodymyr Onyshchenko He who awoke the Stone state.[9] 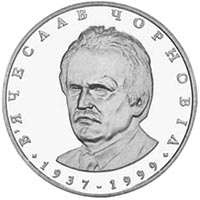 Chornovil was expected to become the main opposition candidate against the incumbent president Leonid Kuchma for the 1999 presidential election, but Chornovil's presidential campaign was interrupted in its early stages by his suspicious death in an automobile crash on March 25, 1999, his assistant Yevhen Pavlov was also killed in the crash .[10] The official investigation carried by the Ministry of Internal Affairs concluded that the crash was purely accidental and discovered no evidence of the foul play. However, some of Chornovil's supporters called his death a political murder and called on bringing those responsible for it to justice. The fact of murder is stated on the website dedicated to Vyacheslav Chornovil and created by his son Taras Chornovil, a deputy of Verkhovna Rada formerly from the Party of Regions[11]

In 2003, the National Bank of Ukraine issued a commemorative coin with the nominal of 2 Hryvnias dedicated to Chornovil.

On August 23, 2006, Viktor Yushchenko, the previous President of Ukraine, unveiled a monument to Chornovil and ordered a new investigation into his death. On September 6, 2006, Yuri Lutsenko, the head of the Ministry of Internal Affairs, announced that based on the information he saw, he personally believes that Chornovil was a victim of the murder rather than a car accident.[12][13] Lutsenko stated further that the investigation is now carried by the Office of the Prosecutor General of Ukraine and the Security Service of Ukraine, the law enforcement authorities not under Lutsenko's control. He went further, alluding that "certain circles" in the Prosecutor's Office and Security Service are stonewalling the investigation.[14] However, on August 9, Oleksandr Medvedko, the Prosecutor General of Ukraine, commented at the news conference that Lutsenko's statement is "unprofessional" as his conclusions are based on unreliable information.[15]

On March 25, 2009 a funeral service was held in near the memorable sign in Boryspil and admirers (including the Mayor of Kiev (then Leonid Chernovetskyi)) lead flowers on his monument in Kiev to mark the 10 year passing after Chornovil's death.[16] The same day the People's Movement of Ukraine called on the law enforcement agencies of Ukraine to complete investigation into the case involving the killing of their former leader Viacheslav Chornovil and his assistant Yevhen Pavlov in a road incident until 2010.[10]