From Infogalactic: the planetary knowledge core
Jump to: navigation, search
This article is about the self-proclaimed mayor of Sloviansk. For other people, see Vyacheslav Ponomarev. 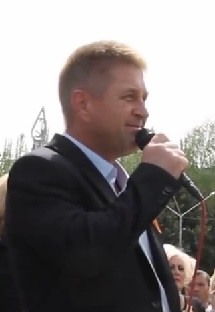 Vyacheslav Vladimirovich Ponomarev (Russian: Вячеслав Владимирович Пономарёв) (born 2 May 1965, in Sloviansk) is an owner of a soap production company[1][2] who in 2014 became known as the self-proclaimed mayor of the city of Sloviansk in Donetsk Oblast, a part of Ukraine.

The origin of Vyacheslav Ponomaryov is uncertain. According to the official legend that is promoted by Pravda.ru, Ponomaryov, a Sloviansk native, was an owner of a sawing factory and later a soap producing factory.

He declared himself mayor after leading an assault on the Sloviansk mayor’s office on 14 April 2014, as part of the 2014 pro-Russian conflict in Ukraine.[3] Ponamarev is a strong opponent of the government of Ukraine that formed in Kiev after the overthrow of the country's elected President, and refers to it as fascist.[3] He claims that coalition government in Kiev is run by "Nazis" and "homosexuals".[4] Ponomaryov stated that he would do everything he could to prevent the 2014 Ukrainian presidential election taking place.[5]

Ponomarev has said that he commands around 2,500 men in the vicinity of Sloviansk.[1] He is a veteran of the Soviet war in Afghanistan and served in a "special operations unit" of the Arctic-based Northern Fleet.[2] His men held the elected mayor of Sloviansk, Nelya Shtepa, in captivity, though Ponomarev said that his government was protecting her from Ukrainian law enforcement.[3][2] He also stated that there was conflict between him and Shtepa, in which she acted "incorrectly".[4] In interview to Gazeta.ru, Ponomaryov said that he was given protection after the Security Service of Ukraine opened a case against her for separatism.[5]

On direction of Ponomaryov his men detained American Vice News journalist Simon Ostrovsky on 20 April[6][4] who declared after his release that he had been intimidated and beaten during his detention.[7][4] According to the journalist the Ponomaryov's men had his photo and they were looking for him on purpose.[4] According to Ponomaryov, Ostrovsky has dual citizenship and is a spy.[4] In interview to Gazeta.ru on 23 April, Ponomaryov acknowledged that he keeps Ostrovsky for exchange.[5] Ostrovsky was released only after the intervention of representatives from OSCE and the United States Department of State.[4][8] Ponomaryov told the media that Ostrovsky was not a hostage, but a guest and that he simply accommodated Ostrovsky with lodging.[8]

According to the Security Service of Ukraine, on 20 April 2014 Ponomaryov received orders from Igor Girkin to dispose body of kidnapped and tortured to death local representative of Horlivka city council Volodymyr Rybak.[4]

On 25 April 2014, Ponomaryov reported that supporters of federalization stopped vehicle with OSCE representatives whom they suspected in spying and therefore detained them.[8] An OSCE military verification mission, while being detained by Ponomarev's forces, stated that they were "not prisoners of war," but were "guests of Mayor Ponomaryov, and being treated as such."[9]

Later Ponomaryov declared that kidnapping of people is a retaliation for all his detained "comrades".[8]

On 10 June 2014, Ponomarev was arrested by rebels loyal to former GRU officer Igor Girkin (a.k.a. Igor Strelkov) and taken to the headquarters of the Donbass People's Militia in a former SBU building.[10][11][12] Volodymyr Pavlenko was appointed a mayor of Slovyansk instead of Ponomaryov.[12] Along with the withdrawing pro-Russian militia, Ponomaryov left Slovyansk on 5 July 2014.[12]