From Infogalactic: the planetary knowledge core
Jump to: navigation, search
For the title for the divider of Vedas, see Vyasa (title). For the crater on Mercury, see Vyasa (crater). For the Brahmin community often pronounced as Vyas, see Bias Brahmin.

Vyasa (Sanskrit: व्यास, vyāsa, literally “Compiler”) is a central and revered figure in most Hindu traditions. He is also sometimes called Veda Vyāsa (वेदव्यास, veda-vyāsa, "the one who classified the Vedas") or Krishna Dvaipāyana (referring to his complexion and birthplace). He is the author of the Mahabharata, as well as a character in it. He is considered to be the scribe of both the Vedas and Puranas. According to Hindu beliefs, Vyasa is an avatar of the god Vishnu.[1][2] Vyasa is also considered to be one of the seven Chiranjivins (long lived, or immortals), who are still in existence according to Hindu belief.

Vyasa lived around the 3rd millennium BC.[3][4] The festival of Guru Purnima is dedicated to him. It is also known as Vyasa Purnima, for it is the day believed to be both his birthday and the day he divided the Vedas.[5][6]

Vyasa appears for the first time as the compiler of, and an important character in, the Mahabharata. It is said that he was the expansion of the god Vishnu who came in Dwaparayuga to make all the Vedic knowledge available in written form which was available in spoken form at that time. He was the son of Satyavati, daughter of the fisherman Dusharaj,[7] and the wandering sage Parashara (who is credited with being the author of the first Purana: Vishnu Purana). He was born on an island in the river Yamuna.[8] There are two different views regarding his birthplace. One of the views suggests that he was born in the Tanahun district in western Nepal, other view suggests that he was born on Island in Yamuna river near Kalpi, Uttar Pradesh, India. Vyasa was dark-complexioned and hence may be called by the name Krishna, and also the name Dwaipayana, meaning 'island-born'.

Vyasa was grandfather to the Kauravas and Pandavas. Their fathers, Dhritarashtra, Pandu and Vidura were the sons of Vyasa. The third son, Vidura, was born to a serving maid Parishrami. Shere as Dhrutharashtra and Pandu are Sons of Ambalika and Ambika.

Vyasa is believed to have lived on the banks of Ganga in modern day Uttarakhand. The place was also the abode of sage Vashishta along with Pandavas, the five brothers of Mahabharata.[9]

Hindus traditionally hold that Vyasa categorised the primordial single Veda into three canonical collections, and that the fourth one, known as Atharvaveda, was recognized as Veda only very much later. Hence he was called Veda Vyasa, or "Splitter of the Vedas," the splitting being a feat that allowed people to understand the divine knowledge of the Veda. The word vyasa means split, differentiate, or describe.

The Vishnu Purana has a theory about Vyasa.[10] The Hindu view of the universe is that of a cyclic phenomenon that comes into existence and dissolves repeatedly. Each cycle is presided over by a number of Manus, one for each Manvantara, that has four ages, Yugas of declining virtues. The Dvapara Yuga is the third Yuga. The Vishnu Purana (Book 3, Ch 3) says:

In every third world age (Dvapara), Vishnu, in the person of Vyasa, in order to promote the good of mankind, divides the Veda, which is properly but one, into many portions. Observing the limited perseverance, energy, and application of mortals, he makes the Veda fourfold, to adapt it to their capacities; and the bodily form which he assumes, in order to effect that classification, is known by the name of Veda-vyasa. Of the different Vyasas in the present Manvantara and the branches which they have taught, you shall have an account. Twenty-eight times have the Vedas been arranged by the great Rishis in the Vaivasvata Manvantara... and consequently eight and twenty Vyasas have passed away; by whom, in the respective periods, the Veda has been divided into four. The first... distribution was made by Svayambhu (Brahma) himself; in the second, the arranger of the Veda (Vyasa) was Prajapati... (and so on up to twenty-eight).[11]

As per Vishnu Purana, Guru Drona's son rishi Aswatthama will become the next sage Vyasa (title), who in turn divide the Veda in 29th Mahayuga of 7th Manvantara.[12]

Author of the Mahabharata 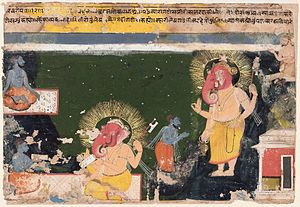 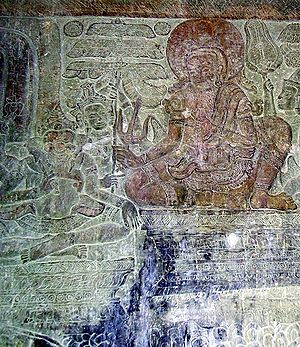 Vyasa narrating the Mahabharata to Ganesha, his scribe, Angkor Wat.

Vyasa is traditionally known as author of this epic and likewise features as an important character in it. Vyasa told her that child would suffer from anaemia, and he would not be fit enough to rule the kingdom. Later this child was known as Pāndu. Then Vyasa told Satyavati to send one of them again so that a healthy child can be born. This time Ambika and Ambālika sent a maid in the place of themselves. The maid was quite calm and composed, and she got a healthy child later named as Vidura. While these are his sons, another son Śuka, born of his wife Pinjalā (Vatikā),[13] daughter of the sage Jābāli, is considered his true spiritual heir. He makes occasional appearances in the story as a spiritual guide to the young princes. 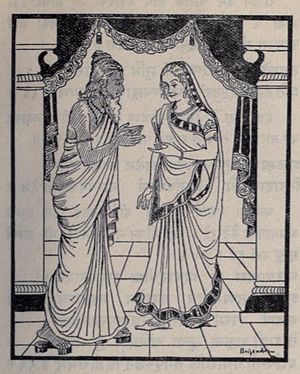 Vyasa with his mother (Satyavati)

In the first book of the Mahābhārata, it is described that Vyasa asked Ganesha to aid him in writing the text, but Ganesha imposed a condition that he would do so only if Vyasa narrated the story without pause. To which Vyasa then made a counter-condition that Ganesha must understand the verse before he transcribed it. Thus Vyasa narrated the entire Mahābhārata and all the Upanishads and the 18 Puranas, while Lord Ganesha wrote.

Vyasa is supposed to have meditated and authored the epic by the foothills of the river Beas (Vipasa) in the Punjab region.[citation needed]

Vyasa's Jaya, the core of Mahābhārata is structured in the form of a dialogue between Dhritarashtra (the Kuru king and the father of the Kauravas, who opposed the Pāndavas in the Kurukshetra War) and Sanjaya, his adviser and chariot driver. Sanjaya narrates the particulars of Kurukshetra War, fought in eighteen days, chronologically. Dhritarāshtra at times asks a question and doubts, sometimes lamenting, knowing of the destruction caused by the war to his sons, friends and kinsmen.

Sanjaya, in the beginning, gives a description of the various continents of the Earth, numerous planets, and focuses on the Indian subcontinent. Large and elaborate lists are given, describing hundreds of kingdoms, tribes, provinces, cities, towns, villages, rivers, mountains, forests etc. of the (ancient) Indian subcontinent (Bhārata Varsha). Additionally, he gives descriptions of the military formations adopted by each side on each day, the death of individual heroes and the details of the war-races. Eighteen chapters of Vyasa's Jaya constitutes the Bhagavad Gita, a sacred text of the Hindus. Thus, Jaya deals with diverse subjects like geography, history, warfare, religion and morality.

The final version of Vyasa's work is the Mahābhārata. It is structured as a narration by Ugrasrava Sauti, a professional story teller, to an assembly of rishis who, in the forest of Naimisha, had just attended the 12 year sacrifice known as Saunaka, also known as "Kulapati".

Within the Mahābhārata, there is a tradition in which Vyasa wishes to write down or inscribe his work:

The Grandsire Brahma (creator of the universe) comes and tells Vyasa to get the help of Ganapati for his task. Ganapati writes down the stanzas recited by Vyasa from memory and thus the Mahābhārata is inscribed or written.

There is some evidence however that writing may have been known earlier based on archeological findings of styli in the Painted Grey Ware culture, dated between 1100 BC and 700 BC.[14][15][16] and archeological evidence of the Brahmi script being used from at least 600 BC.[17]

Vyasa is also credited with the writing of the eighteen major Purāṇas. His son Shuka is the narrator of the major Purāṇa Bhagavat-Purāṇa.

The Yoga Bhashya, a commentary on the Yoga Sutras of Patanjali, is attributed to Vyasa.[18]

The Brahma Sutra is attributed to Badarayana — which makes him the proponent of the crest-jewel school of Hindu philosophy, i.e., Vedanta. Vyasa was conflated with Badarayana by Vaishnavas with the reason that the island on which Vyasa was born is said to have been covered by Badara (Indian jujube/Ber/Ziziphus mauritiana) trees.[19] Although some modern historians suggest that these were two different personalities.

There may have been more than one Vyasa, or the name Vyasa may have been used at times to give credibility to a number of ancient texts.[20] Much ancient Indian literature was a result of long oral tradition with wide cultural significance rather than the result of a single author. However Vyasa is credited with documenting, compiling, categorising or writing commentaries on much of this literature.

Within Buddhism Vyasa appears as Kanha-dipayana (the Pali version of his name) in two Jataka tales: the Kanha-dipayana Jataka and Ghata Jataka. Whilst the former in which he appears as the Bodhisattva has no relation to his tales from the Hindu works, his role in the latter one has parallels in an important event in the Mahabharata.

In the 16th book of the epic, Mausala Parva, the end of the Vrishnis, clansmen of Vyasa's namesake and Krishna is narrated. The epic says: One day, the Vrishni heroes .. saw Vishvamitra, Kanwa and Narada arrived at Dwaraka. Afflicted by the rod of chastisement wielded by the deities, those heroes, causing Samba to be disguised like a woman, approached those ascetics and said, ‘This one is the wife of Vabhru of immeasurable energy who is desirous of having a son. Ye Rishis, do you know for certain what this one will bring forth?Those ascetics, attempted to be thus deceived, said: ‘This heir of Vasudeva, by name Samba, will bring forth a fierce iron bolt for the destruction of the Vrishnis and the Andhakas.

The Bhagavata Purana (book 11) too narrates the incident in a similar manner and names the sages as Visvāmitra, Asita, Kanva, Durvāsa, Bhrigu, Angirâ, Kashyapa, Vâmadeva, Atri, Vasishthha, along with Nârada and others - it does not explicitly include Vyasa in the list.

The Ghata Jataka has a different version: The Vrishnis, wishing to test Kanha-dipayana's powers of clairvoyance, played a practical joke on him. They tied a pillow to the belly of a young lad, and dressing him up as a woman, took him to the ascetic and asked when the baby would be born. The ascetic replied that on the seventh day the person before him would give birth to a knot of acacia wood which would destroy the race of Văásudeva. The youths thereupon fell on him and killed him, but his prophecy came true .

Guru Gobind Singh attributed him the store of vedic learning.[23]

Arthashastra of Chanakya (Kautilya), Vyasa has an interesting entry. In chapter 6 of the first Department, it says;-

Whosoever is of reverse character, whoever has not his organs of sense under his control, will soon perish, though possessed of the whole earth bounded by the four quarters. For example: Bhoja, known also by the name, Dándakya, making a lascivious attempt on a Bráhman maiden, perished along with his kingdom and relations; so also Karála, the Vaideha... Vátápi in his attempt under the influence of overjoy to attack Agastya, as well as the corporation of the Vrishnis in their attempt against Dwaipáyan.

This reference matches the Jataka version in including Vyasa as the sage attacked by the Vrishnis, though Vyasa does not die here.