From Infogalactic: the planetary knowledge core
Jump to: navigation, search
For other uses of "Vyborg", see Vyborg (disambiguation).

The town lies in the boundary zone between the East Slavic/Russian and Finnish worlds and has changed hands several times in history, most ultimately in 1944 when it was retaken by the Soviet Union from Finland during World War II.

The city hosts the Russian end of the 1,222 km Nord Stream gas pipeline, laid in 2011 and operated by a consortium led by Russia's Gazprom state hydrocarbons enterprise to pump 55 billion m³ of natural gas a year under the Baltic to Greifswald, Germany.[13]

The area where Vyborg is located used to be a trading center on the Vuoksi River's western branch, which has dried up. The region was inhabited by the Karelians, a Balto-Finnic tribe which gradually came under the domination of Novgorod and Sweden. According to archeological digs and research, on the site of Vyborg there were a Karelian trading post in the 10th century.[14] Vyborg itself appeared in the 11th–12th centuries as a mixed Karelian-Russian settlement.[7] 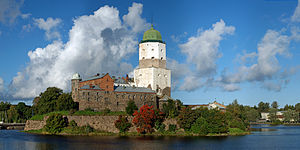 The first Viborg Castle was founded during the so-called "Third Swedish Crusade" in 1293 by marshal Torkel Knutsson.[7] The castle was fought over for decades between Sweden and the Novgorod Republic. By the Treaty of Nöteborg in 1323 between the Republic of Novgorod and Sweden, Vyborg was finally recognized as a part of Sweden. The town's trade privileges were chartered by the Pan-Scandinavian King Eric of Pomerania in 1403. It withstood a prolonged siege by Daniil Shchenya during the Russo–Swedish War of 1496–1497. 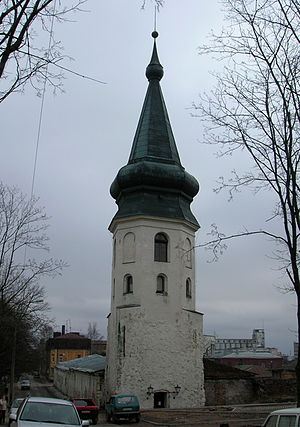 Under Swedish rule, Vyborg was closely associated with the noble family of Bååt, originally from Småland. The late-medieval commanders and fief holders of Vyborg were (almost always) descended from or married to the Bååt family. In practice, though not having this as their formal title, they functioned as Margraves, had feudal privileges, and kept all the crown's incomes from the fief to use for the defense of the realm's eastern border. 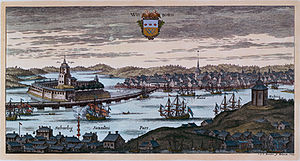 A copper engraving of Vyborg in 1709

Vyborg remained in Swedish hands until its capture in 1710 after the Siege of Vyborg by Tsar Peter the Great in the Great Northern War.[7] In the course of Peter's second administrative reform, Vyborg became the seat of Vyborg Province of St. Petersburg Governorate.[15] The 1721 Treaty of Nystad, which concluded the war with Sweden, finalized the transfer of the town and a part of Old Finland to Russia.[7]

One of the largest naval battles in history, the Battle of Vyborg Bay, was fought off the shore of the Vyborg Bay on July 4, 1790.

After the rest of Finland was ceded to Russia in 1809, Emperor Alexander I incorporated the town and the governorate into the newly created Grand Duchy of Finland in 1811.[16]

In the course of the 19th century, the town developed as the center of administration and trade for the eastern part of Finland. The inauguration of the Saimaa Canal in 1856 benefited the local economy as it opened the vast waterways of Eastern Finland to the sea. Vyborg was never a major industrial center and lacked large production facilities, but due to its location it served as a focal point of transports of all industries on the Karelian Isthmus, Ladoga Karelia, and southeastern Finland.

Following the Russian Revolution of 1917 and the fall of the Russian Empire, Finland declared itself independent. During the Finnish Civil War, Vyborg was in the hands of the Finnish Red Guards until it was captured by the White Guard on April 29, 1918. In April–May 1918, 360–420 civilians, mainly Russians men are murdered by White Guard during the Vyborg massacre.

In the inter-war decades, the town,Viipuri, was the second biggest town in Finland and the seat of Viipuri Province. In 1939, Vyborg had some 80,000 inhabitants, including sizable minorities of Swedes, Germans, Russians, Gypsies, Tatars, and Jews. During this time, Alvar Aalto built the Vyborg Library—a masterpiece of modern architecture.

During the Winter War between the Soviet Union and Finland in 1939–1940, over seventy thousand people were evacuated from Vyborg to western Finland. The Winter War was concluded by the Moscow Peace Treaty, which stipulated the transfer of Vyborg and the whole Karelian Isthmus—emptied of their residents—to Soviet control, where it was incorporated into the Karelo-Finnish Soviet Socialist Republic on March 31, 1940. As the town was still held by the Finns, the remaining Finnish population, some ten thousand people, had to be evacuated in haste before the handover. Thus, practically the whole population of Finnish Vyborg was resettled elsewhere in Finland. The town became the administrative center of Vyborgsky District.

The evacuees from Finnish Karelia came to be a vociferous political force and their wish to return to their homes was an important motive when Finland sought support from Nazi Germany against the Soviet threat. As a result, Finland and Nazi Germany fought on the same side in the Continuation War.

On August 29, 1941, Vyborg was captured by Finnish troops. At first, the Finnish Army did not allow civilians into the town. Of the 6,287 buildings, 3,807 had been destroyed. The first civilians started to arrive at the end of September and by the end of the year Vyborg had a population of about 9,700. In December 1941, the Government of Finland formally annexed the town along with the other areas lost in the Moscow Peace Treaty. However, this annexation was not recognized by any foreign state, not even Finlands co-belligerent, Germany. By 1942, it had risen to 16,000. About 70% of the evacuees from Finnish Karelia returned after the re-conquest to rebuild their looted homes, but were again evacuated after the Red Army's Vyborg–Petrozavodsk Offensive, timed to coincide with the Battle of Normandy. By the time of the Soviet offensive, the town had a population of nearly 28,000. The town was evacuated by June 19 and the defense of Vyborg was entrusted to the 20th Brigade. The town fell to the Red Army on June 20, 1944, but the Finns managed to halt the Soviet offensive at the Battle of Tali-Ihantala—the largest battle fought by any of the Nordic countries—in Viipuri rural municipality which surrounded the town. The town was seriously damaged.

In the subsequent Moscow Armistice of September 19, 1944, Finland returned to the borders set by the Moscow Peace Treaty and ceded more land than the treaty originally demanded. In the 1947 Paris Peace treaties, Finland relinquished all claims to Viipuri/Vyborg.

After the Winter War, Leningrad Oblast wanted to incorporate the area of Vyborg, but it took until November 1944 for it to be finally transferred from the Karelo-Finnish SSR.[16] During the Soviet era, the town was settled by people from all over the Soviet Union. The naval air bases of Pribilovo and Veshchevo were built nearby.

Similar to many other areas along the Baltic Sea, Vyborg has a humid continental climate[17] with large temperature differences between summer and winter but too mild to be classified subarctic with five months above 10 °C (50 °F) in mean temperature. Winter temperatures are being somewhat moderated by maritime effects compared with Russian cities further inland even on more southerly parallels. 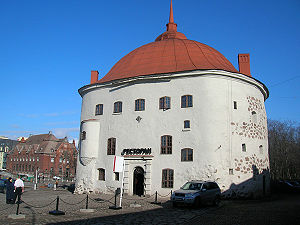 Vyborg continues to be an important industrial producer of paper. Tourism is increasingly important, and the Russian film festival Window to Europe takes place in the town each year.

An HVDC back-to-back facility for the exchange of electricity between the Russian and Finnish power grids was completed near Vyborg in 1982. It consists of three bipolar HVDC back-to-back schemes with an operating voltage of 85 kV and a maximum transmission rate of 355 megawatts, so that the entire maximum transmission rate amounts to 1,420 megawatts.[citation needed] 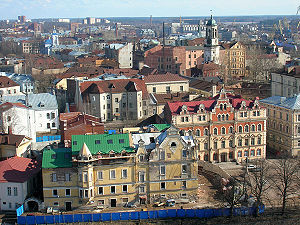 Vyborg's most prominent landmark is its Swedish-built castle, started in the 13th century and extensively reconstructed in 1891–1894. The Round Tower and the Rathaus Tower date from the mid-16th century and are parts of the Medieval Vyborg town wall. The Viipuri Library by Finnish architect Alvar Aalto and the Hermitage-Vyborg Center are a reference point in the history of modern architecture.

There are also Russian fortifications of Annenkrone, completed by 1740, as well as the monuments to Peter the Great (1910) and Torkel Knutsson. Tourists can also visit the house where the founder of the Soviet state Vladimir Lenin prepared the Bolshevik revolution during his stay in Viipuri from September 24 to October 7, 1917.

Sprawling along the heights adjacent to the Gulf of Finland is Mon Repos, one of the most spacious English landscape gardens in Eastern Europe. The garden was laid out on behest of its owner, Baron Ludwig Heinrich von Nikolay, at the turn of the 19th century. Most of its structures were designed by the architect Giuseppe Antonio Martinelli. Previously, the estate belonged to the future king Frederick I (Maria Fyodorovna's brother), who called it Charlottendahl in honor of his second wife.

Bolshevik revolutionary Vladimir Lenin lived in the town for a period following the failure of the February Revolution of 1917. Finnish Nobel prize winner Martti Ahtisaari was born in Viipuri in 1937. Cyclist Viatcheslav Ekimov and former Formula One driver Vitaly Petrov were born in the town. Finnish soldier Lauri Törni, who received the Mannerheim Cross for his service during the Winter War, was born here, and later served in the Finnish, German, and United States armies.

Vyborg is twinned with: