From Infogalactic: the planetary knowledge core
(Redirected from Vyetka)
Jump to: navigation, search

Vietka is a small, historical town in Belarus, situated on the bank of the Sozh River. It is the principal centre in Vietka Rajon in Gomel Region.[1]

It was established in 1685 by the Old Believer Priest Group (a branch of the Orthodox Christian Church)[2]) who were known as the Theodesians and who had migrated from Central Russia. At the time it was founded, Vetka was on Lithuanian territory.[3]

The town's prosperity brought on the wrath of the Russian Empire and as result, it was gutted twice (1735 and 1764[1]) by the Tsarist army in the 18th century.[4][5] Vetka, on the left bank of the Sozh River, is located in an area which was highly radioactive due to the nuclear fallout of the Chernobyl disaster that occurred on April 26, 1986.[1][2]

The town is named Vietka after an island in the Sozh River. "Vietka" means "branch" in Belarusian language.

The town is located in the Homiel region on the right bank of the Sozh River and is surrounded by forest and marshy land.[4] It is situated 22 kilometres (14 mi) away from Homiel. The Homiel and Dobruš road passes through the town.[2] It has 139 inhabited areas in 57 resettled suburbs in the district which extends over an area of 156.3 km2 (60.3 sq mi).[1]

As of 2003, the population of the district was 19,700.[1] While urban population was 9,000 in 1992, the population of Vietka town was 5,982 (42.6% is Jewish), living in 11 stone and 994 wooden buildings. During this period six rope plants and six windmills, four forges, four stone and 120 wooden shops were reported. The population of Vetka increased to 7,200 in 1997. The main vocations were of jewellery, small trade and handicrafts with the Jews concentrating on timber trading, operating from Vietka wharf.[6]

A fairly large priest group, the Old Believer Priest Group from Central Russia, who were ordained under the Pre-Nikon rites, migrated to Vietka and established a number of villages in the vicinity, under the leadership of Hieromonk Fedosie.[5]

The Old Believer Priest Group, known as Theodesians, believed in Jesus of Nazareth, King of the Jews (JNKJ) and had prospered in Russia. They found favour with the Tsars and the Imperial Government vis-à-vis the Non-Priest Group.[7] After moving to Vetka, they practiced their religion with freedom and they also had economic opportunities to prosper. This resulted in Vetka becoming a town of about 40,000 people around 1730.[5] Thus, during the 17th–18th centuries, in Vietka and surrounding suburbs with neighbouring settlements, there was a proliferation of monasteries and priories. It became known as the "centre of Raskolniks" with distinct assimilation and preservation of the "traditions of the Moscow Russia". The main square of the town was also named the Red Square, as in Moscow, which name is still in vogue here. This ensued a period of the proliferation of the artistic culture of "icon painting and manuscript book design" and Vetka wood carving.[2]

However, in 1733 Anna of Russia forced the Vietka Old Believer Group to relocate to Russia, and when they refused, they were forcibly moved out of Vietka to Central Russia. Epifane, the Bishop of the Vietka community, was subject to incarceration in 1733. Following this, those living in villages around Vietka organized themselves and started building up a flourishing economy. However, this was not tolerated by Catherine the Great and the entire group of Old Believers were forcibly transported to Siberia thus putting an end to their presence in Vietka.[5] Finally, in 1772, the Russian Empire took over Vietka.

Ships were manufactured here from 1840 and the rich people of the town were known to own steamships.[4]

In 1917, Vietka was absorbed into the administrative jurisdiction of the Gomel Region.[2] German troops occupied Vietka in 1918 during World War I. A power station was built in Vietka in 1924. It received a status of a town and a district in 1925. Vietka became a part of Russian Federation of Soviet Socialist Republic in 1926 and the centre of region in the Belorussian Soviet Socialistic Republic. From 1933, the "Za bolshevistskie tempi" ("For Bolshevik tempos") newspaper was published here. Soviet authorities opened a Jewish school in Yiddish, in Vietka. The population of Vietka in 1939 was 6,000 people at the beginning of the World War II.[6] During World War II, from August 18, 1941, till September 27, 1943, Axis forces occupied the town.[2] The Nazis murdered 656 citizens.

The Chernobyl catastrophe which occurred on April 26, 1986, also caused immense depletion of population; as many as 40,000 were resettled in areas away from radiation effect, and the remaining population of the town was reported as only 7,000 on the first anniversary of the disaster.[4]

There are many industries in Vietka, which have boosted the economy of the region. These include milk and meat production, cotton mills and weaving mills. There are four agricultural production cooperatives, many agricultural companies, four farms, 23 dairy and four hog-breeding farms and a stud farm. Economic survey of Vietka gives a picture of all round socioeconomic development with 10.4% industrial production in 2007 with a trade turnover of 13.8%. Exports are reported to have increased by 74.1% with imports recording 126.7%. The trade surplus is also reported.[8]

A cement factory is being set up in Vietka utilizing chalk available at the Shyrokoye and Podkamennoe deposits, close to Vietka.[9] 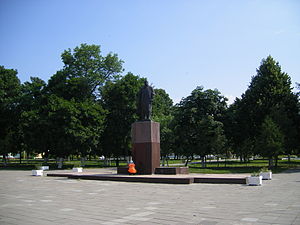 The city has attractions for tourists such as folk lore, crafts and traditions of Old Believers.[2] There are 64 archaeological monuments, as well as twelve folklore and ethnographic performing arts groups in Vietka.[1] Fifty-five historical and cultural monuments are located in the Vietka district. In addition, the well-known architectural monuments are the Senezhinsky’s Palace in Khalch village and the Merchant Groshikov’s house in Vietka itself. The latter was built in 1897 in the Red Square, which now houses the Folk Art Museum. The museum has exhibits depicting the ancient artifacts, richly carved wooden entrance doors, manuscripts, traditional costumes and woven rushniki.[4] The collection of Fyodor Grigorjevich Shklyarov is the main source of the Folk Art Museum, which has 5,600 exhibits representing folk culture and life, traditional art and trades of Vietka region.[10]