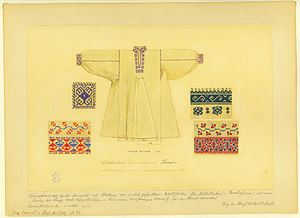 Vyshyvanka ((Russian: Вышиванка; IPA: [ʋɪʃɪˈʋanka]), Ukrainian: "Вишива́нка" [ʋɪʃɪˈʋanka] or "Виши́ванка" [ʋɪˈʃɪʋanka]) is the Old East Slavic traditional shirt which contains elements of Ukrainian ethnic embroidery. Many variations of its design were created. Usually, it was made of homemade linen which was produced by loom. Local features are usually represented in the shirt's ornamental pattern.

According to Slavic mythology, embroidery on vyshyvanka is used as a talisman to protect the person wearing it and to tell a story.[1] Embroidery was used in vulnerable places on the garment where evil spirits could potentially enter the body: along the neckline, cuffs, shoulders, back and hem.[2]

National Vyshyvanka Day is celebrated on the 21st of May. On this day many Ukrainians wear vyshyvankas to demonstrate adherence to the idea of national identity and unity and to show their patriotism.