Wagner's law, known as the law of increasing state spending, is a principle named after the German economist Adolph Wagner (1835–1917).[1] He first observed it for his own country and then for other countries. For any country the public expenditure rises constantly. It shows an upward sloping trend. The law predicts that the development of an industrial economy will be accompanied by an increased share of public expenditure in gross national product:

Wagner's law suggests that a welfare state evolves from free market capitalism due to the population voting for ever-increasing social services. Neo-Keynesians and socialists often urge governments to emulate modern welfare states like Sweden. In spite of some ambiguity, Wagner's statement in formal terms has been interpreted by Richard Musgrave as follows:

As progressive nations industrialize, the share of the public sector in the national economy grows continually. The increase in State Expenditure is needed because of three main reasons. Wagner himself identified these as (i) social activities of the state, (ii) administrative and protective actions, and (iii) welfare functions. The material below is an apparently much more generous interpretation of Wagner's original premise. 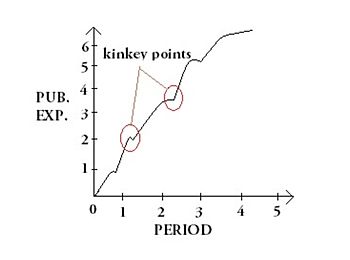 As per the study on public expenditure for the period 1891-1955[3] in U.K. conducted by Peacock and Wiseman based on Wagner’s Law, it was found to be still applicable.

It was further stated that