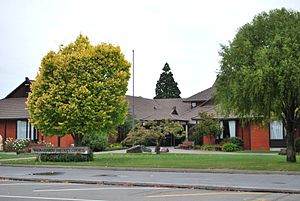 The Waimakariri District is a local government district, located in the Canterbury Region of New Zealand's South Island. It is named after the Waimakariri River, which forms the district's southern boundary, separating it from Christchurch City and the Selwyn District. It is bounded in the north by the Hurunui District and in the east by the Pacific Ocean.

The district was established on 1 April 1989 following the merger of Rangiora District and Eyre County. The district covers 2,219 square kilometres (857 sq mi), and is home to 56,400 people.[1] Rangiora is the district seat and largest town, with other major towns including Kaiapoi, Oxford, Pegasus and Woodend.

Location of the Waimakariri District

The Waimakariri District lies to the north of the Waimakariri River in North Canterbury. The major urban areas are Rangiora and Kaiapoi, which are respectively about 20 and 30 minutes travelling time by car from the centre of Christchurch City.

There are other urban settlements including Woodend and Oxford, as well as a number of village and beach settlements.

The District occupies some 225,000 hectares, and extends from Pegasus Bay in the east to the Puketeraki Range in the west. It is bounded to the north by the Hurunui District.

In pre-European times there were several important Ngai Tahu settlements in the area now occupied by the Waimakariri District. The centre of Ngai Tahu was the pa of Taurakautahi, known as Kaiapoi. Today, the hapu Ngai Tuahuriri is based at Tuahiwi, to the north of Kaiapoi. People who identify themselves as having NZ Maori ancestry presently represent 8.5% of the District’s population, and most of these people live in the eastern part of the District.

During the early years of European settlement, Kaiapoi developed as a river port. Rangiora was the area’s main market town, and the development of Oxford was based on timber milling. The roles of the District’s main urban areas have changed during recent years, mainly as the result of the rapid population growth.

European settlement concentrated on the fertile soils of the plains. Until the middle of the 20th century extensive agricultural and pastoral farming predominated. More recently, horticultural and forestry have gained in importance. Today some 11% of the District’s labour force is now involved with agriculture, forestry and fishing.

The Waimakariri District has a population of 56,400 (as of June 2015 estimate).[1] The district has experienced a rapidly growing population that is predicted to continue to increase. Despite rapid growth, Waimakariri has retained its rural/small town character and a high proportion of residents are involved in an extensive range of community and recreational organisations.

A large portion of the Waimakariri District has fertile flat land, or highly productive rolling downs. Much of the land to the east of Rangiora is reclaimed swamp, which is still subject to poor drainage and occasional flooding.

The north-western portion of the District is hill and high country. These hills, including Mt Oxford, Mt Richardson, Mt Thomas and Mt Grey, dominate the District’s western landscape.

Historically the District was dominated by extensive agricultural and pastoral farming activity with few major industries. More recently many new small holdings have been created; some of these are used for full-time or part-time horticultural enterprises, including vegetable and flower growing.

The Waimakariri District has a high standard of communications. The South Island Main Trunk Railway and State Highway 1 cross the eastern portion of the District. The District also has an airfield at Rangiora, and is close to the Christchurch International Airport. Telecommunications are continually being upgraded.

The District offers a wide range of recreation. It has sandy beaches, estuaries, river gorges and braided rivers, which offer a range of choices for fishing, boating and rafting.

The foothills and mountains offer a variety of tramping experiences which complement a growing range of walking trails and formal recreational areas throughout the District.

The Waimakariri District is served by 20 state and three state-integrated primary schools, as well as two area schools covering years 1–13, one in Oxford and one in Rangiora (Rangiora New Life), and two secondary schools: Rangiora High School and Kaiapoi High School. Many of the primary schools are well supported by the community, and an increasing number of pre-schools have begun to open in the District.