The Romanian Plain (Romanian: Câmpia Română) is located in southern Romania and the easternmost tip of Serbia, where it is known as the Wallachian Plain (Serbian: Vlaška nizija/ Влашка низија). Part of the historical region of Wallachia, it is bordered by the Danube River in the east, south and west, and by the Getic Plateau in the north. Bucharest, the capital of Romania, is located in the central part of the Romanian Plain. It is contiguous to the south with the Danubian Plain (Bulgarian: Дунавска равнина), in Bulgaria. This area is also sometimes referred to as the Danubian Plain (Câmpia Dunării) in Romanian, though this designation is not specific, because the Danube flows through a number of plains along its course, such as the Hungarian Plain (which is called Danubian Plain in Slovakia and Serbia) as well as the Bavarian Lowland, also called Danubian plain. 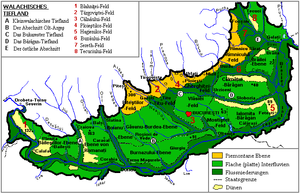 The main divisions of the Wallachian Plain

Lua error in Module:Coordinates at line 668: callParserFunction: function "#coordinates" was not found.bg:Дунавска равнина